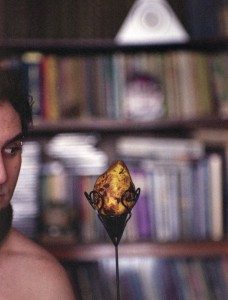 She has been planning this date with the beautiful boy for a week. There would be wine, then brie glazed with brown sugar and Kahlua, served with water crackers. His hand would graze her knee. She would try to read his palm, running her finger along lines that seemed too short. He would tell her how his mother used to walk around the house naked. She would talk about her grandfather and a peach room and the butterscotch candies she received afterwards. They would try for intense eye contact during this part of the conversation and fail. His hand would slide up to her thigh by the time they ordered lattes. She would know his middle name before the check arrived. They would bump into each other as he walked her home. She would sneak a sideways glance, wondering what truths could be discovered within the shape of his jaw. For an entire block he would hold her hand. Their laughter would grow more nervous. They would slow their steps as they approached her place, hands momentarily unlinking. He would stand in her doorway, asking if he could come in. She tries to see her decision but is startled by a knock at the door. It’s him. She stares at the door knob. Sees her face, tiny, inverted. Lips misshapen into an answer she’s not ready to give.

Nancy Hightower’s work has appeared in storySouth, Word Riot, Gargoyle, Red Fez, Prick of the Spindle, Prime Number Magazine and Big Muddy, and is forthcoming in A cappella Zoo. Her short story collection “Kinds of Leaving,” was shortlisted for the Flann O’Brien Award for Innovative Fiction, and Port Yonder press will publish her collection of poetry, The Acolyte. She currently reviews science fiction and fantasy for The Washington Post.