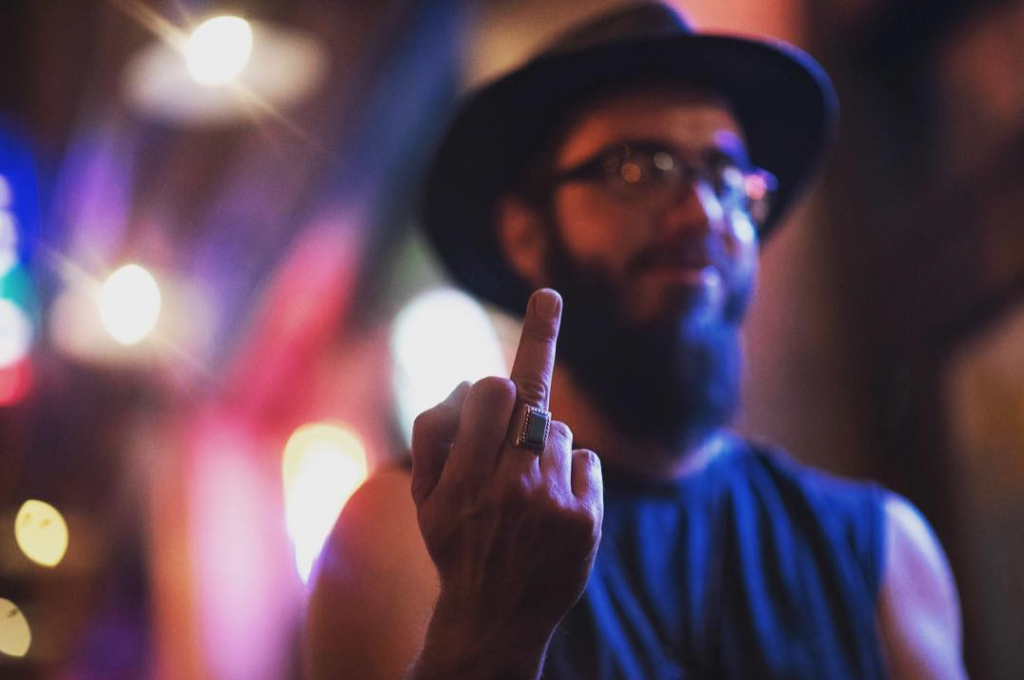 Jen thinks of it as a “sleepover hangover”: the way her ten-year-old Clara returns from a slumber party cranky and exhausted, hurling herself on the couch in a torpor. Clara behaves not like herself but like Jen’s stepson Julius, a sixteen-year-old so surly that Jen’s best friend refers to him as Julius Displeaser. But this particular day, Clara’s mood is more tenacious than usual—usually these sleepover funks burn off like morning fog. When Jen finally loses her patience and says, “Stop being a pill,” Clara bursts into tears.

“Those girls are so mean,” she says, crying so hard she’s gasping for breath.

“And everyone agreed! Even Hattie! And said I should wear deodorant! But I’m ten!” Clara’s face is so red and snotty she looks emulsified.

Jen kisses the top of her head. She’s always disliked that kid Tamsen, obnoxious since kindergarten. At birthday parties Tamsen demands special slices of cake, a corner piece, or one with a frosting rose. Though Clara probably does need deodorant. The poor kid is only ten but already getting breasts, pubic hair. Probably these damn bovine growth hormones, so incongruent with Clara’s penchant for rainbow socks and sequined unicorn tee-shirts. Kids are cruel.

It makes Jen revisit the great humiliation of her life—how her freshman boarding school roommate Bethany, upon arriving back at the dormitory from class, would ostentatiously open the windows. Jen was too clueless, lying in her bed reading romance novels, to decode the intended gesture. So finally the roommate reported her to the dorm-mistress, who lectured Jen about soap and hygiene. Years later Jen came to see the whole event as not Bethany being cruel but herself being impenetrably dense. But it remains the most mortifying event of her life.

Later that night Clara asks to sleep in Jen’s bed, and Jen agrees—why not? Doug is out of town, again, on one of his increasingly frequent business trips. They talk, calmly now, about choosing a deodorant at Walgreen’s. Clara says sadly, “The worst part was when Hattie agreed with them all.”

Hattie is Clara’s best friend, though lately Jen has sensed a weakening there. It’s the vibe Jen got in the past when a boyfriend was preparing to dump her—that telltale receding of enthusiasm.

“Why don’t you tell Hattie that your feelings were hurt?”

But Clara shakes her head—no, impossible! Jen strokes her silky hair, considering how her daughter is a conflict-avoider like herself.

“I miss Dad,” Clara says, and Jen winces. She is almost certain that Doug is not alone in that hotel room in Denver—that his coworker is nestled beside him. Ever since she saw a text from Mandy two weeks ago, she’s been obsessing over those late work nights, those business trips that Doug used to avoid and now leaps at. But she has not said anything to Doug. Doing her own version of what her boarding school roommate Bethany did, dramatically opening windows. Trying to express non-verbally, Will you fucking get a grip?

Jen’s best friend Liza is over for a movie night, keeping Jen company while Clara spends the night at Doug’s new apartment. They watch the 1930’s film The Women, until Liza pauses it, aghast; Jen is crying uncontrollably. Like Clara six months ago, she’s barely able to catch her breath.

“What’s wrong, honey?” Liza says, and Jen, almost hyper-ventilating, points at the frozen screen. In the movie, the wife played by Norma Shearer has learned, via a manicurist’s gossip, that her husband is having an affair. Norma Shearer’s mother urges her to pretend she knows nothing. He will get over it on his own, her mother promises. Be cheerful and loving. But of course Norma Shearer confronts her husband. The couple fights; the film cuts to her husband leaving her for sultry Joan Crawford.

“I knew I shouldn’t have said anything to Doug,” Jen sobs.

“Oh my God, you are listening to advice that was old-fashioned in 1939!” says Liza. “Note it’s the old lady who gives it.”

“But the movie endorses the mother’s point of view!” says Jen. “Look at the shot of the mother sadly shaking her head! Look at how Stephen immediately leaves! The mother is clearly correct.”

“First of all, you need to keep watching to the end. Not that I think Doug deserves a second chance, by the way. If you get back together with him, it will seriously circumscribe my ability to hang out here, because your husband is a dick.”

“But Liza, be honest: do you think if I’d never said anything to Doug about Mandy, and just kept pretending nothing was going on, would we still be together?”

“Oh honey,” says Liza. “How can I possibly answer that question?”

When Jen opens the door to Julius, she’s taken aback. “Hey, are you here for your clarinet? I gave it to your dad.”

“No, actually, I wanted to see how you’re doing. Can I come in?”

The question is so foreign for Julius—almost courtly—that Jen is stymied, and Julius follows her into the kitchen. Automatically, she pours him a glass of lemonade. When Julius was small, six or seven, he adored Jen—Doug used to joke about how he had competition. She read Julius The Phantom Tollbooth, they played endless rounds of Battleship. Julius always clustered his ships in a corner, a gnarled nest. But in the past five years, Julius has barely said more than two words in sequence to Jen, and she’s so used to his standard repertoire—“Nothing much,” “It sucks,” “Yes, please”—that she’s tongue-tied.

“I just want to say I’m sorry about Dad,” Julius says. “And I hope I can still hang out with you and Clara.”

“Um,” says Jen. She knows she should say, “Of course,” but that assent sticks in her throat.

“Dad is a dick,” Julius says. “Frankly it used to bug me, how you didn’t see that. I’d come over here and you guys would be so giggly and there was my mother, bummed all the time, and it pissed me off. Like, how come you don’t see what an asshole he is? I just want you to know that you’re not alone here.”

Again, Jen is aware of what she should say at this juncture—“Your father is not an asshole,” or something more general, like “Life is complicated.” But she is unable to do anything but nod.

Julius says, “I don’t mean that’s all he is, a dick. Dad has good qualities, they just come out all fucked up. He asked me to check on you.”

This information makes Jen step backward, and Julius raises an arm. “Which is not why I did! I miss you and Clara. Is it still cool if I come by? Maybe you could still make me those hamburgers with guacamole. Maybe I could bring my mom?”

Go figure. Prior to this, as a silver lining of splitting up with her husband, Jen would have offered that she no longer has to struggle making conversation with his mute son, or deal with his shrill ex-wife.

“Still cool,” she says. Oh well, she thinks. Families are never something you choose, even when you have, in a purely indirect way, chosen them.

“Hey Jen, it’s Mandy,” says the voice on the phone, and Jen feels like she’s being zapped by one of those police taser guns. Seriously, could life become any weirder? Just the other day Doug’s ex-wife Cynthia was teaching her how to knit with circular needles. Awkwardly, Mandy explains.

Apparently Doug is acting bizarre—yelling at a waitress for bringing him still instead of sparkling water, cursing some old lady who didn’t put on her turn signal. “He called her a motherfucker,” says Mandy. It turns out Mandy had an uncle who died of a brain tumor who went through a radical personality transformation before it was diagnosed—becoming overnight hostile and enraged. So Mandy thinks Doug’s problem could be neurological.

“But the thing is, I don’t have a clear sense of Doug’s baseline personality,” says Mandy. The whole time she’s known Doug, he’s been so charming, thoughtful, and affectionate, but it has occurred to her—or rather, her mother has pointed out—that this might be the “Oz” version of Doug.

Mandy says, “You know, all technicolor, when Dorothy lands in Oz and Glinda floats in inside a soap bubble. So my mom thought I should check with someone who really knows Doug, the black-and-white Kansas Doug, so to speak, to see what you thought.”

How different Mandy’s mother is from the one in The Women. She trusts that an abandoned ex would give an accurate picture.

“Is Doug taking his Zoloft?”

“Doug takes Zoloft?” Mandy sounds horrified.
“Half the people I know take Zoloft! Really, it’s no big deal,” Jen says. She explains that Doug experiments with quitting, because he thinks Zoloft makes him gain weight, or he worries about how it mixes with his blood pressure medication. “But really, Mandy, he should never stop taking it, because this is exactly how he gets—irritable and aggressive, picking fights with strangers. Ask him if he’s quit; if he has, make him start again.”

“Okay,” says Mandy, unhappily, and Jen tries to parse her hesitancy. Is Mandy a conflict-avoider like herself, another surprising member of her new, peculiar, Island of the Misfit Toys club? Or is her hesitancy about the new Doug Mandy now confronts—someone imperfect, temperamental, a little spoiled? Is it easier for Mandy to believe her boyfriend has a brain tumor?

Jen hangs up, and turns on the oven. Julius is coming over for dinner, she needs to roast his favorite garlicky potatoes.

When Mandy described her brain tumor theory, Liz’s first reptile-brain thought had been freezing, undiluted fear. This was overwhelmed by more selfish considerations—how would Clara handle her father dying? How would they manage without Doug’s child support? But that first thought, that initial catch in her throat: does it mean Jen still loves him?

In the weeks after he left, Jen tortured herself with a particular memory of Doug. Oddly, it wasn’t a romantic memory (not about, for instance, his proposal, when they were hiking in the Marin headlands, and he hid her ring in the Ziploc with the avocado sandwiches). No, it was an early date. She was bringing him to a party at Liza’s. It was the first time, in other words, that Doug would meet a group of her friends. They must have loitered around the corner from Liza’s house for twenty minutes, Doug practically having a panic attack, so stressed out about being introduced to what he called “All your people.” “What if they hate me?” he kept asking. But when they got to Liza’s, he’d been charming. Jen heard him tell Liza, “Sorry we’re late. We had trouble finding parking.”

For some reason, this was the memory Jen had kept returning it to, reviewing the reel, every prism facet. Why? Because it made Doug seem vulnerable, freaked out about pleasing her friends? Because that was proof he was invested in her?

It only occurs to Jen at this moment, peeling potatoes, that this incident was her first experience of Doug the liar.

Kim Magowan lives in San Francisco and teaches in the Department of Literatures and Languages at Mills College. Her short story collection Undoing won the 2017 Moon City Press Fiction Award and was published in March 2018. Her novel The Light Source is forthcoming from 7.13 Books in 2019. Her fiction has been published in Atticus Review, Bird’s Thumb, Cleaver, The Gettysburg Review, Hobart, New World Writing, Sixfold, and many other journals. She is Fiction Editor of Pithead Chapel. www.kimmagowan.com