The parasite doesn’t see what she does as an extraordinary intrusion. Not uncommon, really. A third of the population of humans on Earth have such pretty parasites as herself living in them. Toxoplasma gondii to be exact: Cat People.

Toxo-lady, as the parasite likes to call herselves, which are spread across all the creatures in the house, loves the cat named Geronimo, whom she inhabits. She gets to have sex inside the cells in Geronimo’s guts — the only place she can have sex. Nice and warm. Then, Geronimo poops out her baby-oocysts.

Then Jane cleans the litter box, and Toxo-lady’s babies are born. In Jane.

Toxo-lady gets to talk to the babies every day. They never leave home, unless Jane does. And she never stays gone long. She has to come back to feed the cat. What better way to keep your friends nearby?

Toxo-lady’s oocist-baby-clone nursery hides in Jane’s brain. Toxo-lady loves her children. She always wanted to have a big family.

The parasite is well known to influence the mind of its human host for its own agenda. Since Toxo-lady moved in, Jane never stops at red lights any more, and she laughs about it, spit spurting out of her eyes and ears. Making zooming noises, she calls herself Crazy-Jane in a loud voice, like it’s a good thing. She craves the smell of Geronimo’s urine too much. Toxo-lady’s babies know how to make Geronimo’s urine smell like human babies.

Jane thinks she is being replicated. She talks to herself in triplicate. Then, in multiples of seven.

Some of the babies get eaten by the ferret who lives in the house with Jane. “Stupid ferret,” Toxo-lady says, “good thing you ate my babies. See what that does to you.”

Ferretess starts moving around way too fast. Zing zing zing she does. Geronimo can’t help himself and swipes at her. He considers doing something drastic to her. He could, you know. He could.

Ferretess winks at Geronimo, and wags her rump in the air. She likes Geronimo’s urine too. “Smelly!” Says her dopamine.

Ferretess and Jane get more outgoing. Ferretess talks to all the squirrels and chipmunks at the park. Jane starts wearing red. Red stockings, hats, jewelry, purses, dresses, all at once. Every day. Even in the bath.

She starts arguing with women at work about how many of her there are. And how many tiny children she has. She is not as diplomatic about it as she could be, considering her boss has no children. Her boss might be jealous.

Jane and Toxo-lady become more and more one. Toxo-lady draws the adventure maps, and they go exploring together. They find places to die.

Places to be eaten by cats. That is their goal, though Jane sometimes isn’t sure why, or even if. She isn’t sure of too much, anymore. But who cares? Life is to be enjoyed, not lived!

She no longer afraid of snakes. Which is nerve-wracking for Ferretess, because now killing them will be up to her if they come out of the bush and get into the house, which is very likely in the summe, now that Jane leaves all the doors open all the time.

One day, Toxo-lady decides to get serious. The time has come. Time for Geronimo to really eat. Geronimo has been watching Jane and Ferretess more closely than they realized. His grin has been getting larger. The grin has been saying: “We are All mad here, darlings. Thanks for all the food.”

He rubs up against them more than ever. He pushes his neck scent glands all over them.

Ferretess rolls over on her back a lot beside the cat, looking edible as possible. She has no will of her own. The parasite rules. She starts to develop a winking tic.

The parasites in Geronimo’s brain say: “It’s time to stop pussy-footing around.” That is the end of the stupid ferret.

Jane just laughs. She says: “I’m not wearing black to the ferret’s funeral. Oh no. I’ll be the one there who is really expressing.”

Her hair is getting wild. The parasite inside her exudes — reckless. When it sticks in the toaster and catches on fire, one day, she doesn’t notice. “I’m so fey!” She sings. “So very very fey!”

Geronimo is watching. The parasite inside him waiting. Geronimo is very amused. Once Jane stops burning, Geronimo nuzzles her corpse. “Don’t worry,” he meows. “I’ll protect you.”

Tantra Bensko teaches fiction writing at UCLA X Writing Program and her own academy, where she also edits manuscripts. She lives in Berkeley. http://lucidmembrane.weebly.com/ 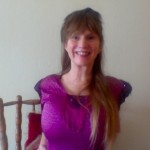