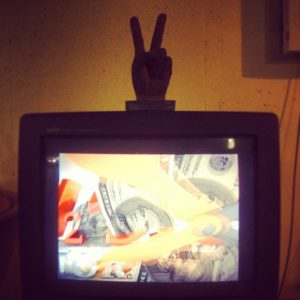 Jane wanted to see the State game, whereas I hoped to catch Oprah’s show. One-TV households force diplomacy on ya.

Since State was killing Michigan by the second quarter, I said “That’s under control, lets watch Oprah but check the score during commercials.”

Jane’s counter-point: “I have the clicker and we’re watching football. “

It was settled for a minute, but Jane dropped her guard. She got up for chips and dip and we were on Oprah when she returned from the kitchen. I hid the clicker, feigned like I had no idea where it was. I’m the funny one between us.

Jane didn’t find it humorous. That was a drag.

Before I could put it back to football or maybe check the news channel, the TV exploded. The living room’s entire front wall smashed up against the back wall. There was a goddamned car stalling out on the couch with a double-drunk motherfucker driving who would’ve caught the ass-beating of a lifetime from me, had my legs not been pinned under the China cabinet.

He piled out of the wreck looking somewhat concerned. “What’s up, guys? Guess I missed my turn.”

Jane was not pinned. Her right arm was obviously broken, but her left arm was toned. A piece of front porch railing was handy and dude caught the ass-beating of a lifetime anyway. It was glorious to watch Jane work out her frustrations. The dude didn’t stay conscious for long, then Jane lost interest in him.

She went back into the kitchen for something. We’d been to Meijer, we had one of everything in there. Maybe she was in shock. Later the hospital people said I was in shock. Plenty of shock for everyone.

After the impact’s incredible loudness, the house seemed exceptionally quiet.

This is a solid brick home; the dude’s car was a scrapper from plowing through it, but his GPS kept voicing route suggestions even as I passed out from blood loss.

No one wants to hear much about doctors saving my life, learning how to walk again on an artificial leg, etc. That’s fine, because I hate talking about it.

The trial was a local news sensation. We even rated a quick mention on the networks, which was nice. Double-drunk dude was on his third offense, and up for the Habitual Offender tag, so his lawyer pulled out all the stops in search of sympathy. Childhood trauma… recent job loss… the tragedy of premature balding… Like that. It gained him traction. But when dude told about Jane knocking him silly, the judge laughed while covering his face.

Dude knew it was over then. He’s not with us for three to five years.

Not to leave a thread dangling untucked: Michigan went down in defeat to State, again, but that’s happened so often since Mike Hart called State “Little Brother,” that I can’t remember which year the accident was.

We’re moving on, but for the love of God don’t let your home-owners insurance lapse. Any moment some shoehorn could barrel through your life drunk and/or careless. 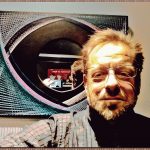