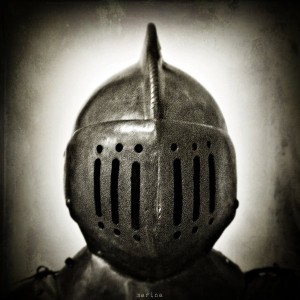 One of Modesty’s coworkers at the bank is a man named Tripp. For a long time, Modesty doesn’t see much of him. Then, gradually, their paths cross more often.

Tripp rides a motorcycle, a Suzuki TL1000R. At first, Modesty doesn’t know that’s its designation. She’s not good with the names of things. She identifies cars, for example, primarily by their colors: that cute yellow car, or the warty-looking black one.

“He calls it something else. Not a crotch rocket but a bottle … a bullet … a bottle rocket …”

“That’s it. Why do you dislike them?”

“They’re for people who define themselves by their toys.”

This jibes with her former impression of such bikes, and their riders. But there’s something about Tripp.

He slides complimentary remarks into his talk, but not in a way that seems sleazy. He’ll be standing in her office, and he’ll look around and say, “The Force is strong in here.”

She starts picking up something for him on her afternoon Starbucks runs. He’s touchingly grateful for these lattes.

Now she sees bullet bikes everywhere. Once, when she and Michael stop for gas on a weekend getaway, she spots one at the next row of pumps. It’s painted red, white, and black. Its rider wears a leather jacket in the same colors.

“That’s often how it’s done. And the boots, too. Will you look at that getup.”

Tripp starts accompanying her to Starbucks. When they pass a bullet bike, he identifies its make and model and guesses its year.

He knows everyone’s not a fan. Once, a man on a Harley punched him in the back of the head while they were both waiting at a red light.

Tripp talks a lot about his wife and stepson. Modesty likes the way he describes his wife. He makes her sound smart and tough and funny, such as any wife might hope to be described.

Tripp isn’t vain about his physical appearance. He tells Modesty about looking in the mirror and seeing a white eyelash. “That was just too much,” he laughs.

“Well, look at me! I’m weird enough looking already. I don’t need any freaky white eyelashes adding to this picture.”

Bullet bikes aren’t designed for distance riding. They’re fast and meant to take curves. When Tripp goes for weekend rides, sometimes friends accompany him. They express concern about how fast he goes, how close he comes to the blacktop during a turn.

“I keep myself tight on the bike,” he says. “Sometimes I’m so far over my helmet is only a few inches from the road. I guess I go by instinct.”

The Force, thinks Modesty, is strong with this one.

Tripp expresses curiosity about Michael. “I think we might get along,” he says. He’s basing this assumption on the belief, gleaned from Modesty’s stories, that the two men share what her mother refers to as a “wise ass sense of humor.”

This may be true, but Modesty knows such a meeting is not a good idea. Perhaps if things hadn’t gone so far already.

Gradually, their outings have evolved from quick coffee runs to long, leisurely lunches. The suggestion to go for drinks is already on the table, put there by Tripp, though it includes the spouses. But it’s remarkably easy for Modesty to change this suggestion into an outing for the two of them alone.

When they’re seated at the bar, Modesty orders a shot of tequila. Tripp raises one strawberry-blond eyebrow in surprise, but matches her order. He starts talking about the way one of their coworkers spoke to Modesty earlier that day.

“Why did he have to talk to you like that? Why would anyone ever feel the need to speak to you, of all people, in that tone of voice? I mean, I know you can take care of yourself and all. But still, it really bothers me.” Tripp downs his drink. “I don’t know what I’m talking about.”

Modesty gulps her own drink. “I do. You’re talking about feeling protective of me.”

“You must think I’m an incredible dork.”

“When I was younger, I might have. Back then I resented the hell out of any guy who acted like he wanted to save me. But now that I’m older, I realize that despite my best efforts, it’s possible I’ll need saving at some point. And I can’t think of anyone I’d like to save me more than you.”

Modesty takes her address book and a pen out of her purse. “So, why don’t you give me your cell number, and if and when I ever need help, I’ll give you a call.”

She sees a look of concern cross Tripp’s face. She knows what that means. He’s picturing her calling in the middle of the night, rousing his wife out of bed.

This, even though he’s been trying to foist his cell number on her for weeks, and she’s been dodging him. Oh brother.

But then his expression clears. He takes the address book and pen from her and writes something, then slides them back across the table.

“What about your wife? If I ever do call, won’t she mind you dashing off to save another woman?”

Tripp reaches across the table. “She knew what she was getting into when she married a Jedi.” He squeezes, then releases her hand.

“Shall we go then?” Modesty asks, rising unsteadily from the booth.

“I am.” They walk out to the parking lot, where Tripp climbs into his new black truck, and Modesty into her old silver car, and they drive away. At the office, Tripp fades back into the background. But for some time afterward, Modesty feels the phone number in her purse. It has a peculiar heft to it, rattling around down there in the bottom of her bucket bag like a torque wrench, and this comforts her.

Dawn Corrigan‘s poetry and prose have appeared in a number of print and online journals, with work forthcoming from Dogzplot, Slipstream, WORK Literary Magazine, Right Hand Pointing, Wisdom Crieth Without, and The Milo Review. Her debut novel, an environmental mystery called Mitigating Circumstances, was published by Five Star/Cengage in January 2014. She lives in Gulf Breeze, Florida. 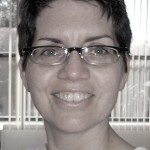