The Boss
by Jeremy Kniola 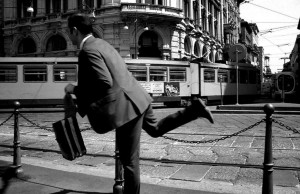 Norton paced through the cubicle maze, pulling out clumps of hair; a shame considering he was already thinning. The cheap rayon suit he wore looked crumpled like the paper that filled his wastebasket. As the regional manager of The Midwest Company, Norton had reason to worry: Productivity was down. Profits were down. Morale was on the upside but that was because no one respected him. Other than a title and fancy office with view of the skyline, Norton was about as vital to the company as a three-hole punch.

“Shit! Are you serious? The boss is coming?” Danny said.

Danny couldn’t tell if Norton looked serious. To Danny he always looked frazzled. Scatterbrained. On the edge of a nervous breakdown. “I don’t know. Are you?”
“YES, I’M SERIOUS!”

Logging out of Facebook, Danny navigated into the computer’s history and deleted YouTube videos, ebay purchases, Words with Friends, Facebook, and any other file that could be deemed inappropriate. Company policy stated any employee caught using property for personal use was subject to termination. Though Danny had no clue what his position entailed, or in what capacity the company performed, he couldn’t afford to lose his job. Lacking marketable skills, he’d have difficulties finding another. He wasn’t really sure how he’d landed this one.

“Someone say the boss is coming?”

Irene hung up the phone. A personal, not a business, call; something that had to do with a rhytidectomy. Slipping off her heels, she planted her nylon-encased feet on the desk, removed a pen from her purse, and slid the plastic tip provocatively into her mouth. The whole process unfolded in slow motion like a Xerox machine printing out a copy. When Irene had an audience, which was always, she never failed to deliver a stunning performance. Both Danny and Norton, along with a slew of other office drones, admired the spectacle.

“The memo said he’d be here within the hour. So everybody look busy.” Norton rummaged in the file cabinets for God knows what.

Danny unplugged his computer and searched for somewhere to stow it.

“What are you guys freaking out about? It’s not like he’s coming to announce layoffs,” Irene remarked.

“Do you know something we don’t know?”

An office drone’s head appeared over a cubicle partition. A fax sender. A copy filer. A new hire. No one paid him any attention, but his question held weight. Everyone eyeballed Irene.

Irene returned the stares with a guileless expression; yet beneath the practiced naiveté there lurked corruption. There were still questions about how she rose from receptionist to Assistant Manager in a couple months. Several speculations circulated the office, but no evidence had surfaced.

“I don’t know anything,” she said. “You should ask Norton. He’s the one who would know. Do you know something we don’t know Norton?”

The misdirection tactic shifted focus to Norton. Talking on the phone, pretending to be on an important call with shareholders–when everyone could hear the buzz of a busy signal–Norton walked into his fancy office with the view of the skyline, shut the door, and drew the shades, like a turtle receding into his shell.

“What’s the boss like anyway?” the new hire asked.

He had a baby face that suggested he was fresh out of college. Ivy league. Business major. He wore glasses instead of contacts to give the impression of intellect. His wardrobe was firmly pressed. His shoes shined. He spoke confidently, a go-getter, which would serve him well in the future. Unfortunately, due to seniority, if cuts were made he’d be first on the chopping block.

Irene sucked on the plastic tip of the pen cap. “He’s thorough. A real stickler for details. But he’s also a risk taker. That’s what makes him successful. You can’t run a company unless you’re willing to do whatever it takes to satisfy your customers. As long as it doesn’t cost you in the long run.”  Somehow what she said sounded like a sexual innuendo.

Danny attempted to shove his computer into a filing cabinet drawer that was obviously too small. “Errr…he expects dedication. Errr…initiative. Errr…a positive attitude. Errr…honesty. Errrr…But above all, he expects…Errr…teamwork. Do you mind coming over here and lending me a hand?”

Norton’s office door swung open. He supervised Danny and the new hire’s attempt to shove the computer into the too small filing cabinet drawer, while dishing out useless advice. “If the boss were here he’d know what to do. With a snap of the fingers he gets things done. If you have a problem he has the solution. Guaranteed.”

The new hire asked Norton if the Boss would think it was a good idea to throw the computer out a window. Before Norton could answer Danny did just that. As Irene joined them they all watched as that square box of modern technology plummeted fifteen stories to the asphalt parking lot below.

“The Boss isn’t going to like this. Do you know what those cost?” Norton really had no idea how much the computer cost.

Clamping his hands on their shoulders, Norton said, “Since you guys displayed such good teamwork, I’m going to give you two the responsibility of telling the Boss what happened. It’s your butts on the line now fellas. Good luck. If you need me, I’ll be in my office.”

“Wow! Did you see it explode on impact?” Irene said, laughing.

Danny shrugged. “I could say it was an accident.”

“Does this boss really exist?” the new hire asked. “Is this even a real company?”

Norton stopped an inch short of his office. Danny slammed the window shut. Irene bit off the tip of the pen cap. “Of course!” they replied.

The new hire had his doubts.

In a show of authority, Norton ordered everyone to get back to work. “Show’s over people. There’s plenty to get done before the boss arrives.” What that necessitated no one knew.

Everyone sauntered to their positions. Norton crumpled papers from the file cabinet to throw in the wastebasket. Danny typed on a non-existent computer. Irene talked to someone on the phone about a dermabrasion. The intern copied files no one would read.

It was going to be a productive day.

Jeremy Kniola lives in the windy city of Chicago, where you may find him writing at one of many local cafes. His fiction has recently appeared in Dogzplot and The Big Jewel. He wears glasses 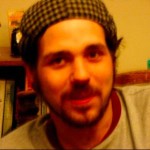