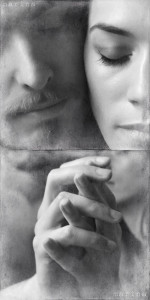 On the charred field, clouds of crows arrived looking for leftovers. The field was littered with debris, a scorched battleground scattered with bits of wood and bones, as after an explosion.

The crows didn’t answer. They stared at me, preening their suits and silk black ties.

I stopped trying to understand why it snowed every time I thought of you. Dressed in our best clothes, we were stuck for hours on a train in the middle of the snowed-in field. We played charades with the shapes of the wind.

At noon, we caught a bus that only got us as far as the road was plowed. We walked in our long coats and fur hats, a snowman and a snowwoman. When we got tired, we sat on the side of the road and ate frozen sandwiches. Your hand was hot in mine.

Later, we were picked up and traveled on top of a horse-drawn wagon full of corn stalks, then in the back of a car that delivered fresh bread. I had a long blizzard veil; you had a white carnation boutonnière. The weatherman said, You may kiss the bride.

For years I walked with my elephant through the desert. He was very quiet and soft. He listened to everything I said, looking at me with his black button eyes. I tied him with a string and pulled him through endless mountains and valleys. We slept in caves under the sky full of windblown bed sheets.

Claudia Serea is a Romanian-born poet who immigrated to the U.S. in 1995. Her poems and translations have appeared in New Letters, 5 a.m., Meridian, Word Riot, Apple Valley Review, and many others. A four-time Pushcart Prize and Best of the Net nominee, she is the author of Angels & Beasts (Phoenicia Publishing, Canada, 2012), The System (Cold Hub Press, New Zealand, 2012), A Dirt Road Hangs From the Sky (8th House Publishing, Canada, 2013) and To Part Is to Die a Little (Cervena Barva Press, forthcoming). Her poem My Father’s Quiets Friends in Prison, 1958-1962 received the New Letters Readers Award in 2013. She co-hosts The Williams Readings poetry series in Rutherford, NJ, and she edits The National Translation Month blog. More at cserea.tumblr.com. 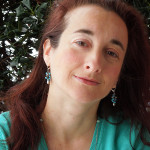