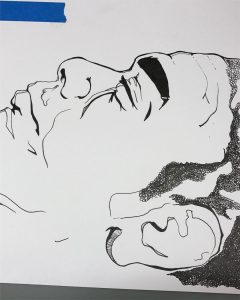 Beebaw always smelled of brisket, so the envelope he sent to my hospital bed brought to mind the scent forcefully enough that I sniffed the paper for the aroma of meat. The odor was not present, but the message, which had arrived by courier the morning after I delivered my daughter, was addressed to me: For Relinka, my Puddinghead. The package felt like sorcery in my hands, as if he’d written to me directly from his grave.

I was four again and sitting at my grandfather’s feet. By then, he was missing two of his top teeth, had a good eye the color of moss, and a bad one that resembled a storm cloud. He often scratched at a white beard that seemed to itch whenever he embellished a story. It was never lost on me that the clawing of those whiskers didn’t occur when he brought up his endless yirgen pocket, which stretched into eternity, “just like the Good Lord.”

Every Saturday night I stayed at my grandfather’s “way out here in the outskirts of San Anton,” as Beebaw called it, so Mom and Dad could lead their separate social lives. In his starch-creased denim, so sharply pressed that the pants felt like cardboard when I climbed onto his lap, Beebaw would say, “Throw in yo’ enchanted offering, Puddinghead. You’ll be gettin’ a yirgenberry credit in return.”

He’d call the items “enchanted” because on the other side of that narrow space lived a monarch who looked like me. She used the “offerings” to build a fortress that she hoped would ward off a ruler from a neighboring land who wanted to marry her and seize her throne.

“No fair!” I’d shout. “That bad ruler better stay away from Puddingland!”

After every dinner at Beebaw’s, I ate a teacupful of rice pudding, hence, my nickname and the monarch’s kingdom – Puddingland. Yirgenberries, named for my mispronunciation of yogurt and berries, were the Puddingland currency, pink and bitter morsels of fruit with purple polka dots and green stripes.

“One yirgenberry over yonder is another year over here. Earn enough, you’ll survive anything, practically live forever.”

Remembering his cough, I asked, “Can I give ‘em to you, Beebaw?”

I’d giggle as I pressed the sticky candy into the opening on his right hip. The items entered and seemingly disappeared. On the fabric, no bulge and no trace of the melted sugary treat. It was all … just … gone.

“Verily, verily, I say unto you, Puddinghead, she’s one step closer to that castle. And you’re a step closer to immortality. Got a mess of yirgenberries now.”

“You’ll be seeing them one day. I reckon it’s gon’ take her fifteen years to build. Which ain’t long. Fifteen years here ain’t but fifteen minutes in Puddingland.”

By the time I was seven, and my parents were divorced, and Beebaw had a colostomy bag, and I was in private school, where they insisted that students learn to ask “enlightened and incisive questions,” I’d grown suspicious of the weekly ritual.

“Why your pocket? Why not a closet or under the front porch?”

“Iffen I know’d, then I’d be rich. Been that way since you was yea big.” He rested his hand on my shoulder.

“You’ve worn those pants since then?”

“And only I can add stuff?”

“Not ‘stuff,’ Puddinghead. ‘Enchanted offerings.’ And, yes, just you.”

“’Cause that gal is you on the other side.”

“How do you know all of this, Beebaw?”

“Dream. Both of you’s was there. And, get this, yo’ daddy wasn’t even born yet.”

The final week of Beebaw’s life, I collected offerings from my now separate homes. At dad’s house, I grabbed a fist-sized block of clay. From mom’s I took a bottle of glittery, blue nail polish, a maxi pad still in its orange wrapper, and Canadian coins. When Beebaw saw the items he said, “We don’t judge offerings – big, small, bad, good, or whatnot.”

But one deeply buried and unasked question gnawed at me. I don’t know why I was afraid to ask. With a hacking cough and a smile, Beebaw always answered any query I posed. But I was scared nonetheless. Perhaps, even at seven, I sensed that too much information was the death of magic.

That night, when Beebaw had fallen asleep in front of a French cuisine show with the remote in one hand and a Heineken in the other, I crept into the darkened TV room, knelt beside his leather recliner, and slipped my hand into his pocket, determined to see whether the offerings I’d deposited were still inside.

Smelling of Ben-Gay, beer, and, of course, brisket, he snored something between a whistle and a scream, and his brown cheeks grew rosy, as if he knew my question and had become embarrassed for me. But, on he slept.

With my hand in that pocket up to my forearm, I felt a surge, like I was communing with something desperate and frightened. This was the first time I’d put my hand in without an offering. The pocket did feel endless, as if my hand was stuck in a drafty well. Cold wind and mist met my fingertips. I closed my eyes, took a deep breath, imagined a Puddingland rainstorm, and moved my palm to the left, where it brushed against a head of soft hair, curly like my own.

Frightened, I retracted my hand with enough force to wake Beebaw, but he didn’t stir. Just before my fingers were fully free, something scratched me. It felt intentional, like a grab that couldn’t get a proper grip and instead settled for ripping at my flesh. When I looked at my hand, the skin was red and welted and stung where I imagined the monarch’s fingernails had dug into me. To the right of the broken skin was a streak of blue, glittery nail color, as if just before snatching at me, she had decorated her nails with my offering.

The pocket moved. The Canadian quarter slipped out and landed on the dingy carpet like change from a vending machine. I knew she was standing at attention on the other side, listening perhaps, sensing my doubts. I whispered, “Thank you” into the pocket. I put my ear on that tiny opening and heard a whisper back, what sounded like a thunderous and deep voice saying, “Welcome.” Can indefatigable belief eventually make fiction true?

Years later, when I told my husband, the only person I ever attempted to tell, he laughed so hard he spit Pinot Noir across the Flatiron bar that we were huddled in. When I got to the part about touching the hair, he guffawed and said, “I’ve got a pretty gross theory about what you were feeling on in that pocket and it wasn’t the monarch’s hair.” I grinned to hide my anger and never mentioned it again. It was about this time that my childhood doubts about the pocket turned to disbelief.

And here I was, the morning after a thirty-hour labor and emergency C-section that had left me in excruciating pain and had sent my newborn to the NICU and back. A near-fatal surgery that had challenged my faith in God let alone yirgenberries. That envelope, adorned in Beebaw’s handwriting and addressed to me, made me feel protected, as if Beebaw were sitting in the hospital chair, watching over my sleeping baby, my husband, and me as I gaped at the package. I imagined the monarch sitting beside Beebaw, she, still young, but perhaps with her curls tossed wildly about her head just as mine were.

Opening the flap, I could smell the brisket and beer. Could hear Beebaw call me Puddinghead. Could hear the nurses’ station beep as they scurried down the hallway to another delivery, they in their world, and I half in another, a magical place that it seemed only I had been called to believe in.

I slid out a picture of me at about ten years old, wearing a tiara and a golden ball gown with a Bertha collar and a sash, my name – Relinka – embroidered on the fabric in gilded font.

“Nice Halloween costume,” my husband said as he stretched in the chair beside my hospital bed, watched our baby, and sipped his coffee.

He would never believe, so I would never share. That wasn’t me in the image. I’d never stood in front of a fortress and had definitely never worn those clothes. The me in the picture held a fisher’s creel filled with bright pink pebbles of fruit. She smirked and pointed to the label affixed to the wicker, written by a hand other than my grandfather’s: Yirgenberries. For you and your baby.

Tamika Thompson is a writer, producer, and journalist. Her fiction has been published by Glass Mountain, The Matador Review, Huizache, and Pantheon Magazine, among others. Her non-fiction has been published by The New York Times, The Huffington Post, MUTHA Magazine, and PBS.org. She lives in Los Angeles with her husband and daughter and is at work on her first novel. 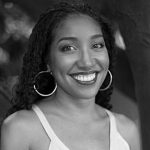