Beat the Mirror by Paul Beckman 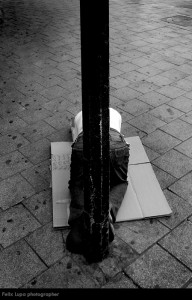 When I was young I remember my mother saying, “Knock it off or I’ll tell your father you’ve been at the mirror again.”

I don’t know why it upset them so much. I loved mirrors. I realized when I was three if I stared into a mirror and then moved my head quickly I could fake out the mirror and my image would stay there a little longer going about its business. I believed there was another me there; not just a reflection. No one believed me. Once, they stopped our family Sunday dinner and made me go into the bathroom and prove it in the mirror over the sink. It didn’t work that time and I was warned to stop fibbing or else.

Or else usually meant my father smacking me somewhere between my neck and knees, depending on how much I squirmed.

When Mitzi was eight I showed her but first made her pinky swear to keep it to herself. She said she didn’t see it but I saw a quick flash of us holding hands. And all these years since, I haven’t shown it to anyone, not even Mitzi again, not even on our wedding night.

I’ve watched little kids try to beat the mirror and have wanted to explain how to do it but it’s like trying to teach someone to wiggle their ears—you’re either a wiggler or you’re not.

Mitzi would have been eighty-two today. I miss her but I keep busy puttering and keeping the lawn and her flowerbeds looking pretty and she would have liked that. The kids want me to move in with them but I’d rather be alone in our house—Mitzi’s and mine.

I got into my pajamas and washed up and brushed my teeth and turned away from the mirror then for some reason, quickly looked back which I haven’t done since I can’t remember when. I saw nothing this time but I was okay with that.

Paul Beckman’s story, “Healing Time” was one of the winners in the Queen’s Ferry 2016 Best of the Small Fictions. His stories are widely published in print and online in the following magazines amongst others: Connecticut Review, Raleigh Review, Litro, Playboy, Pank, Blue Fifth Review, Flash Frontier, Matter Press, Metazen, Pure Slush, Jellyfish Magazine, Thrice Fiction and Literary Orphans. His latest collection, “Peek”, weighed in at 65 stories and 120 pages. His published story website is www.paulbeckmanstories.com and blog is www.pincusb.com. 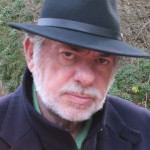