On Another Rainy Day, Main Street +1
by Changming Yuan 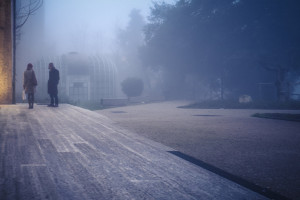 On Another Rainy Day, Main Street

And windows with each car

Red light blinking towards the storm and

Trying hard to find a shelter, a long-necked man

Hopping around with yesterday’s

Vancouver Sun on top off his bald head

An oversized truck full of

As a bus is waiting for strangers

To get off or on, all in wet cartharsis

Each time I take a stroll after supper

I am haunted by the idea why night falls down

On my neighborhood than elsewhere

In particular, I often see the fanciest house trembling

Out of its chimney, greenish blood gushing out

From its pipes, giant shapes charging

Screaming so hard as to thrust open the entire roof

Every time I would keep myself farther away from the

Residence, in case it might drag me into the black fire

That backfires from inside. The house belongs to

A new governor, just elected, a passer-by once told me

Changming Yuan, 8-time Pushcart nominee and author of  Chansons of a Chinaman  (2009) and Landscaping (2013), grew up in rural China, holds a PhD in English and currently tutors in Vancouver, where he co-edits Poetry Pacific with Allen Qing Yuan and operates PP Press. Since mid-2005, Changming‘s poetry has appeared in Asia Literary Review, Best Canadian Poetry (2009;12), BestNewPoemsOnline, London Magazine, Threepenny Review and 839 other publications across 29 countries. 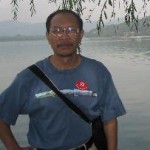