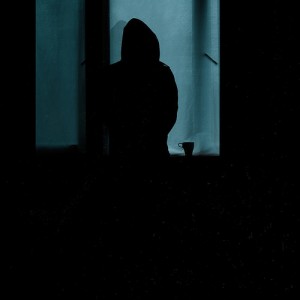 Here I am again.  Dog without a bone.  Hogging up all the earth’s air.  Doing it in a hurry, too, as if I have asthma or have swallowed a roofie.

It’s a blue-lit night, the kind of blue-black twilight that resembles a shiner my Dad once gave Mom for a reason I never knew.  The stars are out there, somewhere, but they’re hidden, caged, and I feel like a pre-pubescent child who searches their bald privates for pubic hair, too eager for the stamp of maturity.

I wonder if God is pleased with himself.  I wonder how disappointed He is in everything, in me, and this claustrophobic hideout I call my life.

Earlier on, I went to the party like you wanted, and I did my best to make smart, small talk.  I may have failed.  I probably did fail.  Everyone there was good-looking and ambitious.  A few women wanted rich husbands, or just to be queen for a day.  One man showed me a picture of him kneeling beside a dead elephant with its tusks missing.  He said it wasn’t him who killed the elephant, but that it was a great photo-op.  He burped in my face by accident, then feigned an apology.

I watched you work the room.  At times you seemed to float.  Your gown was a big hit, but it was your shoes the other women admired most.  Men followed your trail like assassins.  It should have made me feel proud, but I just downed my drink and felt unfamiliar with myself.

We’ve been married since the dawn of time.  It’s funny the things that slough away over the years—long, feverish, tongue kisses, for example.  Patience, for example.

I’m up here facing a near-black Heaven because I left the party early, took a cab without telling you, though I did leave a text.  (I wonder when you’ll notice.)

My fear of heights is something that’s always made me feel cowardly, but tonight it’s nothing other than a nagging sore.  I look down at all the yellow cabs, noticing how they resemble plastic game pieces, shuffling through midtown Manhattan.  It’s overwhelming to consider how many lives are being lived at this very moment, to think that we are all sharing the same air.

When I was younger, giraffes were my favorite animal, but if I could actually be an animal now, I’d be some kind of bird, which I know is strange for a person with a phobia of heights.  But I figure if I was a bird I’d have that little fear tucked away inside my psyche, no different than the way we store our secrets and sins in out-of-reach places.

As I step over the ledge, the building seems to sway, air gusting around my tuxedo pants, testing my resolve.

I wait for the light below to turn green, for the taxis to push forward.  I’m not the best person in the world, but I don’t want to hit a car or ruin anyone’s evening.  I just want to fly a while, see if I can’t be something different for once, maybe even something special.

Len Kuntz is a writer from Washington State.  His work appears widely in print and online journals and his story collection, “The Dark Sunshine,” debuted from Connotation Press last year.  You can find him at lenkuntz.blogspot.com