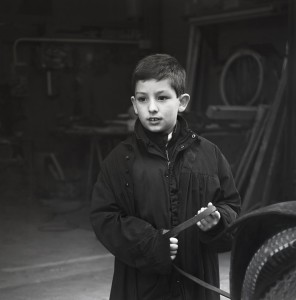 “Feet-all-Al-Coal-Hall-Sin-Drum,” Alan sounded out. “That’s what my mom and dad said you have.”  He jabbed his finger into the cool spring air to emphasize the point, just in case his furrowed brows and trembling lips failed to convey anger.

“What does that EVEN MEAN?” Markie fired back. His voice was raspy. He smelled like stale cereal. The tangled fluff of red hair atop his head was lopsided and bunched up to one side, and his freckles were gross. And Markie swore. The fear of God hadn’t touched him the way it had the others, hadn’t stirred in him the wrathful revelation, rendering him free to utter syllables no one else dare speak. One time, in front of the teacher, he even blurted out, “Shit!”

“It means you’re a jerk. That’s what it means!”

It was true. Markie was a jerk. He was the meanest jerk on the playground, and he’d bully kids on a whim. Everybody used to shy away from him at recess, so he’d have to conscript his “friends,” demanding to join their games in lieu of school-wide humiliation. And he wasn’t afraid of hitting to get his way. This was why the boys were afraid of him; it was why the girls hid from Markie.

Oh, the girls, Alan mused. Just entertaining the thought of ladies filled his mind with daydreams teeming with wet kisses and bony fingers wrapped tightly around his midsection. He imagined soft chins gently nuzzling a single hair taped to his smooth chest. It didn’t matter from which girl or for how long or if she had milk or peanut butter breath. Alan just wanted kisses. He wanted to be the lip-smeared hero from all of his videogames, defying all odds and manner of foes to collect puckered smooches from the fairer sex.

“You want to take that to your grave?” Markie loomed over the would-be hero like a ruby-freckled goliath, his broad shoulders rippling with visible muscles under that Van Halen T-shirt. His Neanderthal forehead creased as he drilled his right fist into his left palm. The resulting sound reminded Alan of a handsaw chewing through lumber. Slowly. Painfully.

When a tree is sawn in half in a forest, and nobody is around…

“I’m a meat-eater, chicken shit, and you’re the meat,” the barbarian growled. An inhuman growl. The kind of throaty growl that reminded Alan of the second boss in that Sega Genesis game he unwrapped last Christmas – Joe & Mac. It’s true; Markie lacked the flailing vines and the leafy mouth of the gargantuan, man-eating plant, but their bellows were nearly identical – ominous and pitched in the wrathful, revelatory octaves of Hell.

It took Alan and his brother, Greg, three tries before they cleared the second level, three tries before they discovered the perfect combination of stone boulders and boomerangs that would pummel that prehistoric flora back into the dirt. And when they finally mashed their fingers to victory, mugs of eggnog, the Christmas elixir of 16-bit champions, never tasted so sweet.

But even sweeter were the kisses. The spoils of war. The prizes of valor. With each boss slain, a voluptuous cavewoman would jog onto the screen, seeking out the hero who dealt the most damage. She’d kiss this loincloth-wearing champion – long and hard – for half a second. His life meter at the top of the screen refilled, he’d raise his arms in victory, standing next to his untouched brother, whose head bowed in shame. For only one could unlock the sensation of puffy-lip smooches. Only one could boast the lecherous treasures of courageous conquests at the caveman bar.

And each time he shamed his brother, Alan would watch in awe. His gleeful voyeurism lapped up the adventures of his digital Casanova, scribbling mental notes. There must have been damsels everywhere, inexplicably thrust into wanton captivity.

Alan thought of pixelated maidens bounding in slow motion when he should have been thinking about Markie’s fist. A battering ram thundered against the buttressed doors over his lungs. The doors trembled. A weak tower lurched as he clutched himself and gasped, choking on air he no longer had.

“How’s that feel, brat?” The ginger giant nursed his knuckles. As Alan leaned against the brick of the school walls, Markie paraded over to the monkey bars, his tremendous feet happily crushing pea gravel into sand in his wake. The day was won. Game. Over.

A collection of eyes weighed on Alan’s shoulders as he slid himself up. Failure ensnared his stomach in vines. From behind its flourishing leaves, it rasped out one of its haunting growls. Not only did Alan fail, but all those kids waiting in line in front of the school watched him fail. Boys. Girls. Older kids. Younger kids. First, second, third, fourth, and fifth graders. It was like dying with no continues – a permanent death prolonged by the lack of a reset button.

He peered over his shoulder, his orbs ever-so-carefully surveying the scene. And that’s when he locked eyes with her – Laura Pefferpoffer. She cast her beady, button-sized jewels downward as soon as she caught his gaze, and those stewing vines in his stomach only thickened.  There she was, a grammar school goddess, one he’d pray to, had the Greeks been smitten enough to build her a shrine, turning away from him. It made his guts churn. It made the bile bubble up. She wasn’t the most popular girl in the second grade, but there was a kindness about her, a tenderness that inspired him to new heights of altruism. Because of her, Alan helped two aliens recover the missing pieces of their spaceship. Because of her, he lent a hand in some naïve dolt’s escape from an island teeming with pirates. It was memories of Laura that kept his mind keen for clues, solving any puzzle dungeon masters threw his way.

The truth of the matter, she was his muse. For Laura, Alan could even beat Joe & Mac, he wagered. He only needed her strength.

A heroic, 16-bit melody chimed in the dark recesses of his brain. Neurons fired. A, B, C, Start, Select. It couldn’t end this way. He couldn’t possibly be out of continues. There had to be a cheat code that could raise her spirits, or a Game Genie that could inspire Laura to bound towards him, her auburn hair fluttering in the cool breeze as the sun lifted its head above the trees. And she would give him the single most courageous motivation a champion could ask for, the holy grail of all fantasies.

What did her kisses taste like? Alan wondered. Eggs and bacon? Or did her beauty radiate through her soft skin because she was pampered with powdered French toast or Belgian waffles piled high with strawberries and whipped cream?

Alan’s mom only fed him pop tarts – the breakfast of “mongoloids” (in his dad’s words). Markie had it even worse. The bully had to scrounge around the kitchen cabinet for spare Cheerios hidden in nooks and crannies. Alan almost pitied him. Almost.

But a reckoning was coming.

This was the day, Alan told himself. He endured three months of torment at the hands of Markie. Alan endured spit, broken ninja turtles, stolen pogs, and name-calling. No more.

Just think of that girl, Alan told himself. His inner monologue sounded a lot like Dirty Harry. He peeped the movie once, late at night, when Dad thought he was in bed. It inspired him to borrow a sense of justice, to have a policy and stick to it – no matter what.

“You want glimmering rubies smacking lips with you, little man?” It was Clint Eastwood. Except it wasn’t Clint Eastwood. It was just his voice, slipping through the pixelated mouth of a green-haired caveman with an oversized boomerang, the kind of weapon one would need for a level two boss fight.

Alan stole one last glance at Laura. Her eyes were elsewhere, distant and surveying the shades of gray that veiled the Heavens. Ominous dreariness set the ambiance – a moral quandary of neither black nor white. The forces of darkness or the harbingers of light would re-arrange the sky when the moment was over, when the booming midi music died down and life meters let the kids all around know who lived and who died. Even their judgment awaited this moment.

Don’t wimp out, kid. You’ll be a hero for this.

Markie swung on the monkey bars, a gloating Donkey Kong atop his kingdom of traps. There were no barrels. There were no sentient balls of fire. No runaway springs bouncing through the playground. Just Markie. And just Alan.

Alan didn’t even realize he did it until he came to, finding himself towering over his archenemy, clutching his own weighted fist like a hunk of concrete. Markie sobbed on the pea gravel, clutching his stomach, and Alan just watched, half bewildered.

Did I hit him? The thought was alien and surreal – a freak act of nature more aligned with supernatural phenomena than cold, hard science.

Alan’s hand was warm. His knuckles were a blend of white and red. A soft throbbing sensation shot up through his swinging arm. And all the kids watching from afar covered their mouths – half in disbelief, the other half in hidden snickers. But not Laura. Her eyes were the eyes Greg wore at the end of every level of Joe & Mac. They were mortified eyes of shattered dreams and shame. 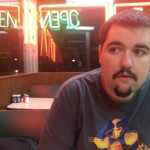