Suppose Heaven was only for people who did no wrong.
Never took a quarter off the sidewalk, always covered their mouth while
sneezing, flossed daily, and always, always used their turn signals.
You may reach St. Peter and be asked why you left work
5 minutes early on January 15, 2004. Why you lied about your weight
on Grindr.  “A few extra pounds”? God is not mocked. Lying to yourself
would also keep you out of paradise. You said you’d go back to school,
and never did. Every New Year’s eve you swore you’d go back to the gym.
You bought new workout clothes.

But maybe Hell wouldn’t be so bad.  It would be full of people
like yourself. Liars. Procrastinators. The careless and the
feckless. The smug and the self-deluded. Forget Dante’s nine circles –
for humanity: an infinite gradation of sin. Satan would be your ruler.
He never went back to the gym. He doesn’t recycle.

Keith Welch, 56,  lives in Bloomington, Indiana.  He is author of the poetry chapbook Bad Zoology. He has or will have poems published in Dime Show Review, Literary Yard, Leo Magazine, and Writers Resist. He has a cockatiel named Sweet Pea who doesn’t care for poetry, or much else, for that matter.  Follow him on Twitter as @Outraged_Poet.  Thanks to everyone who reads his poems. 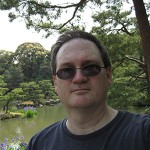