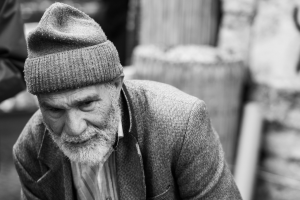 My first night out of the hospital in 13 days. I had watched my dad drift off, watched what was left of him slowly expire, and when it was all over, watched them wheel him away. Now I was on a bus cutting through the heart of the city that had stopped beating.

I was looking to get home, wanted to see about stringing a few nights and days together, really go for a ride. I didn’t care where I went. It would be better that way.

At the next stop stood an old-timer holding a dog leash and no dog. He had a face slapped for all eternity by the wind off the lake. The leash hand was shaking like the waves. And I’d seen that kind of shaking, knew its ebb and flow.

The driver, this wily character with long hair and an eye patch, asked the old man if he was on or off. The old man just stood there and shook. I envied those shakes. I wanted to feel something and I wanted to feel nothing all at once.

I’d worked with the driver, used to day drink and night drink with him. But it’d been a few years. Armando didn’t recognize me when I’d stepped on and I didn’t want to make a point of talking to him. To talk about what?

My dad and I talked about very little: the weather outside the hospital window, the pregnant weather lady, Chicago’s other baseball team, etc. And when we did we communicated through other things.

He struggled to shift his shoulder and I helped adjust the pillow to make him more comfortable.

Whole team is on the DL.

I’ll be dead before they’re any good.

Armando let loose this laugh like a hyena. HEEEEEEHAAAAAAAAAHAAAAAAA!

And he stood down on the gas. The bus lurched forward, hungry for something.

Armando called to the man on the side of the road. What’s it gonna be chief? On or off?  Moths orbited the street lamp above everything, hailing their lord savior. The night was a deep, purple. The air was a wall of wet heat. The world around me seemed to exist outside time and space.

The old man plucked a cigarette butt from the ground and fumbled with a lighter.

Earlier in the night one of the nurses had given me her number and a bag of orange pills and told me she worked three on and two off and this Saturday she was free. I told her I don’t have much luck with nurses and she said that’s what these are for and put her hand around my hand and closed it over the bag of pills.

Sorry about your dad.

I leaned in to kiss her and she stepped back. Not while I’m working.

Her name was either Jessica or Sarah and I would probably never call her.

I ate all the pills waiting for the bus.

I got him a pair of headphones and he’d sort of bob his head listening to music. He’d close his eyes and I could tell he was feeling the music, it moved through him. He dug this sort of jazz and funk band that had come through town last summer. Spydoors was their name and they had a song he liked called “Turn It Upside Down,” a sprawling, guitar-driven number that really went nowhere and sort of just fizzled out all together by the end. But there was a part where the bass line synced with the drums and the guitar player clapped over it all and it just killed him. I hated it, but if it made him happy.

You could tell when he got to that part in the song because you’d see his arms sort of tense like he was trying to lift his hands together. Eventually he’d just blink his eyes in time with the music. Seeing him do that killed me in a different way.

The pills seemed to have the side effect of peace of mind, and I regretted taking them; I wanted to be left with my own disturbed head and block out the world on my own terms.

I dreamed of seeing the Earth at odd angles, of getting snagged by its prickly points.

A mess of a man stumbled on at the next stop. He seemed to be in the grips of a drug-induced vacation. His eyes looked like they’d been found on the side of the road. His aura pulsed with depravity, the type of man I’d find on the L.

He took up the seat across from me.

Some night, am I right?

You hear about the lights out over the lake?

I shook my head nah.

It’s all over the news. People are saying it’s aliens. The man paused to lean further over the aisle. UFO aliens.

It occurred to me this man was a real pills and alcohol type.

My dad just passed away, I said without much emotion, like I was giving an invoice total over the phone. I must have missed all of that.

The northwest side of Chicago passed like film fast-forward. The old Pizza Hut at North and Western, that sign for Hamm’s beer, under the Kennedy we went like worms through a hole digging our way through the crust. No signs of aliens yet, but they could be invisible.

Do you think it’s the end of the world? the man whispered.

Is that what people are saying?

That’s what I’m saying. That’s my theory. But you know what? I’m okay with it. I’ve come to peace with God, man. Whatever is going to happen is going to happen and there’s no fucking way you or I or anybody else could possibly change it. Just let it do whatever it wants to do. We’re just dust. That’s all we are and all we’ll ever be until the day we die.

Dad would stare up at the ceiling and I’d stare at the white paint on the walls because I was too chickenshit to say anything and he was too weak to formulate ideas and had even less strength to move the muscles for speaking. And so we let the machines do their thing and fill the room with life.

Armando started to really gun it. The molecules of the bus joculated. The man and I were thrown back in our seats, victims to physics.

We’re really moving now, the man said. Then he let out a loud sort of Yee Haw.

Then Armando jumped on the brake. Like with a train that can’t stop, you anticipate the impact. The whole 10-ton missile went from 1,000 to zero. I catapulted from my seat and my friend took a dive himself and I think we were both weightless like on a roller coaster, existing in a space between the floor and the ceiling. Someone was smiling or my insides were smiling or the whole universe was grinning as if to say You’ve arrived.

Many years later I am running on a trail in the woods that butts against the cemetery where we buried him. I cut into the cemetery, small and wooded and carefully tended and close to home.

It’s late fall. Gold and copper tinting the branches where the sun lays its last rays. Through the trees, an open sky. A washed out blue seemingly without end.

His grave doesn’t say much, just name and dates.

A White Oak looms over me and him like it’s waiting for a hug.

And I put my head close to my father’s grave.

Are you down there? My breath is very heavy, steam rising into the air. I want to tell him all the things I was to afraid to tell him.

Can you hear me?

No profound realization. Just some wind.

I woke to a taste like biting into a fork. It was the bottom of the bus seat. I grabbed the back of it and pulled myself up. Tried to get my bearings.

The man was up by the driver’s seat, his torso wrapped around the pole for the Ventra scanner. His arms were splayed out like Jesus on the cross. The back of his head was smashed and dark with blood. My gums hurt just to look at him.

I took up the man’s hands in mine, something I didn’t think about at the time. Maybe I’d learned it in a past life.

It’s okay, I said trying to transfer some spirit to the man.

He man blinked with eyes like two celestial bodies, blue and lucid.

A wreck. The bus hit something.

He started to get up and I stopped him.

The man felt the back of his head then looked at the red on his hand.

You probably need a doctor.

I am a doctor.

You probably need a hospital.

The sky was a dark velvet, the moon holding its seems together like a button. The air had a film to it and everything had a motion like shooting stars. Armando was sitting on the asphalt leaning against the front of the bus. He seemed to be holding an orange road flares. But as I got closer I realized it wasn’t a flare at all because Armando was eating it.

Hey, I know you. He said as I approached.

What are you eating?

Carrots. A big stack out in the road. Scared the bleep out of me.

He pointed to the pallet like 20 feet up the road, cardboard boxes lay scattered like fallen leaves. They were in fact carrots.

He pointed to his eyepatch. Didn’t see the damn things until it was too late.

Listen, that other guy needs—

But Armando was busy with one of the boxes.

Here, he held out a carrot. I took it and it practically dragged my arm to the ground, it must have weighed five pounds. It was vibrant, radioactive orange, glowing in the heated night.

It’s funny how we talk around the things really worth talking about. I didn’t answer him immediately. I tried to make sense of the nature of this scene and the scenes proceeding and the moments that would come after. I wondered what was real and what was the drugs and lack of sleep and everything I was feeling after losing a parent.

Finally I said something.

I said I wish we had some music.

Armando nodded his head and ran his hands through his hair. That’d be really nice right now. With that moon, anything would be good company.

We both looked up at it for a while not saying anything at all.

After a while Armando cleared his throat. I suppose we should get moving.

It occurred to me I’d forgotten all about my friend on the bus. Hey, where’d the other guy go? I looked around the bus, looked up into the bus, but couldn’t find him.

What are you talking about?

The guy on the bus, talking about aliens and all that nonsense. He’s pretty hurt.

Armando looked at me suspiciously and took a step back.

You’ve been the only one I’ve picked up all night.

I got home and none of my lights worked. But the microwave still gave the time, and the green lights on the stereo suggested it would play something if I fed it a tape. So I fumbled around in the dark until I found a tape. I punched open the cassette drive and plopped it in. The fuzz of the tape began and I waited in those seconds, waited in the darkness for the fuzz to turn into sound.

Kevin Sterne is the author of From Your Jerry (No Rest Press) and editor in chief of Funny Looking Dog Quarterly. His fiction has appeared in SmokeLong Quarterly, Maudlin House, Entropy, and others. His work has been translated in Spanish and nominated for the Pushcart Prize. He loves running and trees. 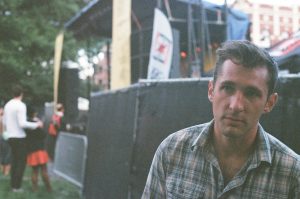