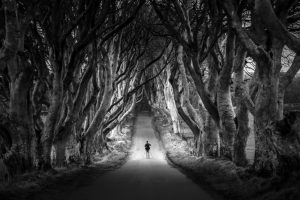 Yemanjá was born crying. Her mother, being the Milky Way Galaxy Queen, gave her daughter roller coaster rides through the milky way, she made her milkshakes from stardust, and she even took her to visit Moon Mother, her younger sister who had a talent for singing little ones to sleep, all in the hopes that her daughter would find joy.

But Yemanjá wailed even more; she pounded her small fists into the air, she kicked her feet out in front of her, and she scrunched up her face like an angry old man’s. Gods who lived millions of light years away could hear her bellows, and sometimes they sent messages via shooting stars to the Queen begging for her to do something, anything.

One day, even the Queen lost her infinite patience. “Quiet, Yemanjá!” she yelled, the sound reverberating like thunder throughout the universe. Then she held her daughter high up and shook her, as though doing this might shock some sense into her. But Yemanjá slipped away from the Queen and her birth home, Methuselah. She tumbled and turned throughout the galaxy, squealing with unfamiliar joy. She’d never known the freedom of not being in her mother’s arms.

The Queen cried for Yemanjá to come back, but she’d floated too far away; in fact, she’d nearly reached Earth, the green globe she always thought was a pretty night light. Before the Queen could stop her, Yemanjá had dropped down through the Earth’s stratosphere like a comet.

Once she reached the ground, she played in the forest for years until she tired, and then she laid down on a bed of moss for a long rest, the moon like one perfect pearl above her. When she awoke, she’d grown into a young woman; she was tall and dark with eyes as gold as the sun. It was then that the Green Man approached her, a man whose limbs were made of vines and leaves. His eyes were the color of rich honey, and his lips were as soft as silk. Yemanjá didn’t question her desire; she simply stepped toward him and brought him into her arms.

Months later when her water broke and flooded the earth, her eyes opened wide with surprise. She settled back against a mountain, knowing she needed to push. The Green Man arrived just in time to help her birth the first human children. They would make up a small village, and somehow, Yemanjá would manage to care for all of them, feeding them berries and the fish Green Man brought home. During the day, they climbed trees and swam in lakes, and in the evenings, they fell asleep learning about the universe and all of its mysteries, Yemanjá’s words sinking deep into their subconscious.

“This is the world you are to care for,” she told them, “just as I have cared for you.”

When they’d grown, Yemanjá whispered to them that she’d dreamed they were to adventure out into the world. They clung to her and cried, these young adults, but in the end they traveled in different directions, carrying Yemanjá’s wisdom with them.

After they’d left, Yemanjá made love to the Green Man once more, and then she left too, flying across the ocean she’d created. The ocean wind kissed her cheeks, and the waves leaped after her like playful pets. She traveled to the bottom of the ocean, where she shapeshifted into a mermaid with a fin the same midnight blue as the sky at night. There, she made her home alongside sea turtles and whales, who whispered to her about their dreams in which they were humans, or cats, or birds. We can be anything in our dreams, they said, and she agreed, for dreams were the same as reality for her.

Juliana Crespo has an MFA in fiction from Indiana University and an M.A. in fiction from University of Nevada, Reno. Her work has appeared or is forthcoming in Flash Fiction Magazine, Fiction Southeast, and Literary Orphans. She is a an English teacher at a high school in Bloomington, Indiana, where she also lives with her family. 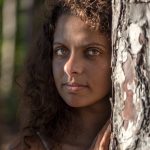