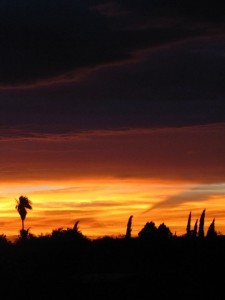 For months, I dreaded listening to my messages.

Several years ago, I lived next to the University of Arizona Agricultural Center. In the middle of Tucson, there were horses, cattle, bales of hay, and the exquisite smells to prove it.

The distinct smell of cow shit wafted through my open windows.

I could hear coyotes clamor in the night.

Every evening I would come home from class, tired, ready to relax and do as little as possible. This strategy would have worked too, save for a series of disturbing phone messages.

At first, I thought the calls were simply a wrong number. However, they soon grew more frequent and increasingly desperate.

They came from an older woman who worked at a hospital. She kept calling for someone named “Barry” whose father was being treated for a terminal disease. I cannot recall her name.

Let’s call her “Margaret” for the sake of this story.

At first Margaret would call and leave a message like this: “Barry, your father is still in the hospital, he is not doing so well, I think you should come visit him.”

It touched me, yet, I guessed she would figure out her mistake and rectify the problem quickly enough.

“Barry, this is Margaret, your father has taken a turn for the worse, it’s not looking so good, you really need to come down here and be with him.”

Margaret pleaded with Barry, her whole heart and soul, trying to get him to visit his father.

Nor was I ever home to answer the phone to tell Margaret this.

Those messages haunted me.

I remember marveling how Margaret was such a loving, dedicated woman to take care of a dying old man like that. What a beautiful person! Barry. Fucking Barry. Oh, I could not stand that prick. I didn’t know him but how I wished for five minutes alone in a room with Barry. I dreamed about knocking some sense into him.

Barry was my Osama bin Laden.

Never did a more vile creature exist in the history of the world than this ungrateful bastard who refused to visit his dying father. I had this impression that Barry was some rich, privileged snot. His father slaved for him. Spoiled him rotten. Paid for college. Bought him nice vehicles. Then once Barry finished his expensive college education and got a high paying job, he became too good for his family.

Then again maybe Barry was the victim here? Suppose his dad was an awful tyrant, faced with his own mortality, desperately trying to atone for his significant sins. Maybe he abused Barry? His wife and other children were long gone, they abandoned him years ago and only good old Barry was around for him to mindfuck now. His last bastion of hate and manipulation.

This prospect confused me even more.

Imagine how it all messed with Margaret.

There were times when I hoped she would call when I was home. I envisioned myself pretending to be Barry. Thinking that his father was too far gone to notice any different, I would show up at the hospital giving both he and Margaret some peace.

All the nurses would love me. Smile at me. Think: “Gosh, Barry is so sweet to his dying father, so nice to us, I wish I had a son like Barry.” Except Barry would be me.

Or I would be Barry.

I envisioned the funeral. A few people would show up. The nurses. Margaret. A stray family member who had not seen me/Barry since childhood. Margaret would weep bitterly. I would hold her. Comfort her. Say: “Its ok, Margaret, Dad is in a better place now.”

“He feels no pain anymore.”

Margaret, the woman who watched my/Barry’s father wither into nothing, would find odd comfort in these acts. In Barry’s kindness.

We would promise to stay in touch. Reveling over my father– the great man.

We would forge a bond, incapacitated father, loving caregiver and fake son.

One night, I was home watching television. The phone rang. It was Margaret. Briefly I closed my eyes.

Her voice trembled on the phone. Aching, tinged with sadness. “Barry?” she asked.
This was my chance. To go through with all of this. To bring these people some peace. I could be Barry. I would be Barry.

She paused. Waiting. Hoping. Needing me to be Barry.

“Oh, I think you have the wrong number.”

I worried about Margaret in those moments. As if she were a great artist who just found out her life’s work was lost in a fire. Here she was calling someone, pleading with them for months, now only to find out the whole time she had been dialing the wrong number.

She took it remarkably well. She gave a curt acknowledgement, said goodbye and was gone. All business.

I didn’t know what to think.

I do not know why I never said anything more. I could not go through with the deception. Even for the sake of my dear friend Margaret, nor for the father I loved but who was not mine. I could not even do it to spite that reprehensible son of a bitch, Barry.

In the end, I was not him. I could not be Barry.

And hopefully, I never will be.

Bill Wetzel is Amskapi Pikuni aka Blackfeet from Montana. He is a former bull rider and combat sports athlete who has lost his mind and embarked on a much more hazardous career in the creative arts. He is a board member of the Tucson Poetry Festival and the curator for the Stjukshon Indigenous reading series at Casa Libre en la Solana in Tucson, AZ. His primary genre as a writer is micro creative nonfiction. Which in layman’s terms is known as…. twitter. Follow him at: http://twitter.com/billthebutcher2