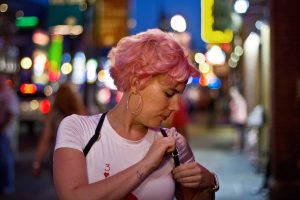 “I’ll bring it right away,” Amy promised her. “You can keep it in your room, right there.” She pointed to a spot on the bedside table next to a picture taken at her high school graduation. She remembered feeling like a whale in that white lace dress, recalled, with a wince, how the photographer had retaken it ten times, saying that he was just looking for her good angle, then shook his head and shrugged his shoulders as though he had given up.

“I’m proud of you,” her mother said. The cold, knobby fingers brought her back to the present as they slipped between her own. It was the first time, in her whole life, that her mother had held her hand.

The opening game of the tournament didn’t begin well. On her first two frames, Amy only knocked down one, and on third and fourth she went right into the gutter. On fifth, things took a turn for the better. She got five down, and after that the spares came in a long, unlikely streak. Harry Lam, recipient of the Warren Memorial Trophy for three years running, looked on from the dim purple dusk of the bar, his mouth agape. Amy left the alley that night feeling unusually warm in her thin black coat, admiring whispers bouncing off her back like sparks.

“You should cover the bowling tournament,” she suggested to Paul.

He raised an eyebrow, cough-laughed in an exaggerated manner.

“What next?” he asked. “The cribbage league? I’m a reporter, not a masochist. Why would I write about something I don’t even have an interest in?”

He did not bother to conceal his interest in the blonde waitress wiping down the table next to them, sipping his milkshake and making loud smacking sounds with his lips. The cigarette in the corner of his mouth bobbed up and down as though it were agreeing with him. He knew that Amy hated it when he smoked indoors.

“Why do you like bowling, anyway?” he asked after a moment. “I mean, seriously.”

“I don’t know. It makes me feel something.”

“Ha!” he coughed. He held his cigarette away from his face and spat onto the soggy remains of his hamburger and fries. “And what does it make you feel?”

“I don’t know.” All she knew was at that moment she wanted to drown in the cracks of the broken jukebox music.

The second game began better than the first had ended. There were no bad frames. By the seventh, her arm burned with effort and the push of adrenaline, and her back sang with the electric buzz of eyes. They roared at her first clean spare – then louder at Lam’s three consecutive strikes. As the tie was announced, the sparks in her head gave one last wild flash before dampening into a low, timid flicker.

The nurse said that her mother had been acting strangely.

“She wouldn’t let me put her breakfast there.” He pointed to the empty spot on the bedside table. “She said that she was saving it for something. Do you know what she’s talking about?”

“It’s nothing.” Amy shook her head as though perplexed, avoided looking at her mother. “On worse days she starts to make things up.”

“The last game is tomorrow,” she said.

Paul didn’t reply, just took a final draw on his cigarette and flicked it onto the path. It flew high and long like a falling star, causing the darkness before them to morph into the door to a distant galaxy. She wanted to walk into it with him, to leave everything else behind – Harry Lam and the bowling alley and the empty place beside the graduation photo. Now that his hand was empty and at his side, it almost brushed hers, and she thought she felt something jump between them – something quick and alive, like a spark.

“Aren’t you cold?” she asked, her fingers trembling as they ventured bravely into the remaining gap.

Lam was playing the final frame of the tournament, and the whole alley was gathered around. He had been on fire the entire game, while she had only managed a last-minute triplet of spares to even it out. Her last had gone straight into the gutter.

The Warren Memorial Trophy wasn’t particularly impressive, just a man with oversized bowling shoes and a featureless face, a ball raised behind him in preparation for what would inevitably be a perfect strike. He was no bigger than a paperweight, and shone too gaudily to be anything but veneered plastic. It wouldn’t be hard, really: just get the footstool from beside the pop machine, grab him around his plastic-gold waist, and make a break for it via the back door. She was glad, now, that Paul hadn’t bothered to call to see how the game was going. She remembered him, then, spitting onto his plate in the flashing lights of the diner.

“And how does it make you feel?”

Her hand hovering over the golden torso, she asked it of herself. How did he, how did everything, make her feel? Like she was always on a dry frame, could never get all the pins down. One in the middle, maybe, two at the side, but never enough to win. And yet, wasn’t that how everybody felt? No one could win all the time. That was life, life was like bowling. Maybe that was why she liked it; it put everything in perspective. Probably, by now, her mother had forgotten.

Amy emerged from the snack-room, blood pounding in her ears and sweat beading on her scalp, empty-handed. A booming yell rose from the lanes.

A frenzied commotion ensued as the winner’s wife, parents, sixteen friends, five children, and three community sponsors ran to him in one shrieking mass. In the spinning chaos which ensued, sparks seemed to fly in all directions, and Amy felt a hand close unexpectedly around her own. It was Harry, who shook it loosely for the duration of three clicks of an unseen camera, a wide, blank smile plastered to his face. As soon as the flash died he let her go, turning to a red-faced, cackling woman who had just arrived with a personalized cake.

Amy slipped out the door of the bowling alley and across the cracked-top parking lot, carrying the lingering warmth of his palm like a light into the gathering darkness.

Stephanie Sushko is a writer and student living in Hamilton, Ontario, Canada. She holds a bachelor’s degree in Arts and Science from McMaster University, and is currently pursuing a teaching degree. Fiction has been her passion from an early age, and she has won several youth writing competitions. 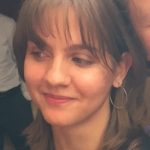