The Wife of Burning Suns by Kenny Mooney

After she had gone, the man sought to remake the wife. From the ashes of his memories. From the pain of her leaving. From the churning of his heart, the thumping of his blood, fierce and red in his veins.

He sought their favourite places, those beaches and forests where their time together had seemed infinite, like the universe itself. An expansive, ever increasing void that threatened to consume him, and which filled him with nothing but desire.

He looked for the wife at first, in those places. Called her name into those voids. Into the hollows of trees, the branches full of leaves, browning in the cooling air. He shouted at the waves, thrashed amongst the crash and surf, a desperation filling him when his hands returned to him empty, full only of the cold water that slipped so easily through his fingers.

And she faded away from his vision. She was the clouds and the air and the gulls rising from the shoreline. She was the wind and the smell of salt.

His tears fell to the sand there on the beach. And him on his knees, empty, utterly lost. Him sobbing and begging. A wretched shape of shuddering. He longed to no longer exist, to be reduced to nothing. And so his hands digging, scratching. To dig himself out of this world of greys. This world lacking any light or warmth.

And the sand became wet with his weeping, and it bound together in his hands, forming shapes. A fresh geometry of the wife.

She rose and her smile was an arc of gold. And she spoke with the soft breeze of summer shores. This wife of sand returned to him.

But the wife was fragile. She was delicate. On mornings he awoke to her dry and crumbling in the bed, and he wept to put her together again. She would touch his face with her fingers of sand and trace his tears down his cheeks. She would stay with him forever, she said.

And his love burned with such heat that he turned her body to glass.

The wife liked her strong new body. She no longer dried out and crumbled. She no longer needed him to repair her. She became sharp and angular. Her sandy curves became hard edges. All her soft became harsh.

No longer a wife of sand, soft and rounded. Now this wife of glass, cold and hard. Her body blunt; her voice cutting when they argued, all too frequently. And him growing angry. Him growing weary with her distance, her turning away. Frustrated and full of resentment.

This wife of glass now shattered into fragments by his rage. A thousand stars scattered across the stone floor of the kitchen, glistening, like the tears in his eyes.

From the great oceans of the world, those she had longed to cross but never did, he made the wife anew. A wife of water, undulating and enveloping, she ebbed and lulled with her own tide. And when the full moon emerged, she rolled in midnight shapes.

She was a generous wife. A giving wife. An amorphous, sensual wrapping of limbs that threatened to engulf him. An eternity he would have easily given up to.

Her voice was whale song, the crashing of waves, and she sang to him at night to ease his anxieties. She moved her body over his and left him wet, and though he shivered, he welcomed that chill.

Yet she was turbulent. Her surface would be calm and flat, yet a violent storm would be churning in her depths, to rise unexpectedly, great waves of rage crashing all around him.

He was weak. He was unfit. Clingy. He was, never could be, enough for her. She needed a man of strength and depth to temper her fury and satisfy the terrible hunger that drove her. Someone who wouldn’t limit her and attempt to constrain her horizons.

And he would hide from her. In their house he would find places to lock himself away, as she thrashed and raged in the rooms around him. And when she calmed, hours, sometimes days later, she would call to him, her sonorous song reaching out over the miles of her oceanic body, and he would go to her, long to drown within her.

Her guilt was in the colour of her seas, the sluggish flow of her water. Yet he knew that guilt tied her to him, and before long resentment would surge up from her deep.

And so the wife of water flowed back to her oceans without him. She left him to return to the vastness that he could never be; to lose herself within that eternal.

He stood on the beach and stared into the sun. Such fire. Such burning heat. If only he could harness that unending radiation. A love that would match his own. That would sear forever.

He remade the wife from the fire in his own heart. From his passion and desire, she emerged, her smile as warm as summer.

And this wife of burning suns loved him as he always wanted her to, with the intensity and urgency that possessed him. When she held his face in her hands of fire, he felt only the heat of her love. And when he stared into her eyes of exploding stars, he saw only her desire for him.

I will love you forever, she said. I want you always.

He saw only the wife. Saw only her flaming body, her provocative amber light, arcing across all the rooms of their house, pouring from her mouth, a blast of neon that filled him with intoxicating heat.

And the wife became a great star, an explosion repeating, searing him with x-ray blasts. Her love swelled, a blossoming fireball, until the wife collapsed into herself.

Don’t be. And he was smiling as he was pulled towards her and the enormous gravity well she was becoming.

I will be with you forever, the wife said.

Kenny Mooney is a writer and musician, currently residing in York, England. He was born in Berlin and grew up in England, Scotland and Cyprus. His fiction has appeared in [PANK], New Dead Families, Atticus Review, and others online and in print. He complains about public transport via Twitter @dragliner78. 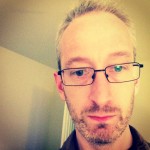