(after Donald Barthelme and Francois Camoin)

I’m hung-over eating French Silk.  You swirl yolk patterns on your plate with the corner of a triangle of toast.  You are either mad or sad.  Like the words themselves it is a thin line with you.  I take a sip of Diet Coke and run through the many ways it’s my fault.

A man comes up to our booth and offers you a flower.  Or rather, offers to make you a flower from the large bag of balloons he has tied to one hip like a gunslinger.  He’s wearing a baseball cap that indicates he is a veteran, but his face has no suggestions as to which war.  I’ve been watching him approach the few other tables in the nearly vacant restaurant.  I’ve been watching the people shake their heads, No.

I ask how much.  Four dollars.  I take the money clip out of my front pocket and set four ones on the table plus an extra bill next to them as a tip.  The man does not pick up the money but instead starts in on the flower.  We watch him blow up the long, thin tubes and then manipulate them into a flower with purple petals, an orange center, and a green stem with a leaf on one side.  You take it in your hands gently, as if it’s a real flower, and set it next to you in our booth.  Your face does not change.

“What else you got?” I ask, laying a five-dollar bill on top of the ones.

He thinks for a moment and makes what quickly becomes apparent will be a sword.  When he’s done he lays it on the table between us.

I put a ten, the last of my cash, on the pile of money which is starting to look like a small poker pot.  I hold up two fingers to the man and one finger up to you. The two indicates two balloon figures.  The one indicates I’ll be back in a moment.

Across the street is a convenience store.  I zig-zag through sparse traffic to the store’s ATM.  There’s one person already at the machine.

The first few weeks we started seeing each other we jokingly mimicked the cheesy gestures of young people in love.  A hand in each other’s back-pocket, that sort of thing.  Since it was ironic it meant we weren’t guilty of being that daffy ourselves, but yet we still got to do it.  Our favorite was blowing cigarette smoke into each other’s lungs.  Of course neither of us smoked so we had to make do with just air.  It felt strange and delicate.  The way love should.

The ATM spits four-hundred in twenties at me and I race back to the booth where the man is putting the finishing touches on a naked woman.  Her companion, a naked man, is already on the table next to the ketchup and Tabasco bottles.  They are his most elaborate works yet, large enough that with the aid of booster chairs they could sit at the booth with us.

I put down the first of my twenties and the man quickly does a crown, a gun, a pinwheel, and a hotdog in a bun.

When I put down another he starts asking for requests.

I had an uncle who gave me a dictionary when I was born.  A huge tome with paper so thin the print from the other side of each page bled through.  Turning them felt like peeling dead skin off after a bad sunburn.  He was a security guard at a bank, my uncle.  But he was a word man.  He wanted me to be a word man too.

I used to be a word man.  I know the score.  Words are the only reason you even gave me a second look.  But now words fail me.  Or I fail them.

When I was young, too young to really use the dictionary, I still liked leafing through its rice paper pages.  Every so often a picture would appear.  Simple etchings of things like a wooden boat, a pencil, rudimentary machines, a hand holding a pocket watch.  They were mesmerizing–with a power and beauty none of my picture books could match.

I finally see what it is we’re doing here.  We’re breathing life into an alphabet.  A squeaky, colorful new language.  One we can toss in the air and bat around playfully.  One that can bend and twist in astonishing ways.  One that can exit my throat.  One that can be passed to you.

Balloons cover the table, spill into our laps, fill the booth, and flow onto the restaurant floor.

I’ve got twenties to last all day.  I aim to see just how much those nail-bitten fingers of his have got.

TJ Gerlach is a Professor at Colorado Mesa University where he teaches creative writing and literature. He has an MFA from the University of Utah and a PhD from the University of Denver. His work has appeared in, among other places, Juked, Flash Fiction Magazine, Aethlon, Shark Reef, Press, Literal Latte, The Wisconsin Review, Mid-American Review, Fiction Southeast and The Review of Contemporary Fiction. 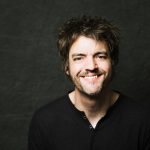