The Usual by Sam Gridley 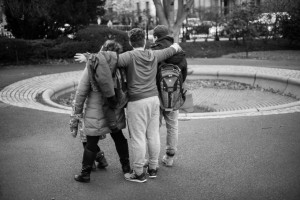 The boy said nothing.

They had stopped at the streetlight, next to the elevated lawn of the corner church, presumably on their way to the school two blocks up.

The early-morning sun cut a wide swath through the intersection. From where I sat in my car, the man and boy were just silhouettes rimmed by glare, their long shadows slicing my hood, but with my windows a third open for the April breeze I could hear them clearly. I’d pulled up at the corner to wait while my coworker got us coffee across the street. With the sun reflecting off the windshield, I must have been even less visible to the man and boy than they were to me. They didn’t know they had an eavesdropper.

“Because we both love your mom,” the man went on, “it’d make sense for us to be buds, you know. But only as much as you like. I’ll wait for your cue.”

From his height, I supposed the kid was eight or nine, but he’d already mastered teen snark.

The man’s shoulders hunched, shrinking the shadow he cast. “A cue can also mean a signal, like an actor’s cue to go on stage.”

“Nobody. You got this strange guy in your life all of a sudden, and I think you’ve been very honest in showing it bothers you. The question is, are we going to move beyond that?”

In a less urban neighborhood the boy might have walked himself to school. Here, parents didn’t trust the streets, and they were right, but I wondered how this man was assigned his task. Had he volunteered? Had the mother been sick or rushed today?

“You don’t have to answer now,” the man said. “I’m not pressuring you.”

Not being pressured was too much pressure for the boy. He spun away and started back the way they had come, then thought better of it and jumped up to sit on the church lawn’s low retaining wall. His features disappeared into the murk under his hoodie, but when he turned to the side, away from his companion, I made out the profile of a snub nose and pointed chin. His thin chest curved like a boomerang—terrible posture, my chiropractor would have said.

The man approached. Strands of his hair, blown by the breeze, sparked with yellow and orange. Now I could see a large dark turtle dangling from his arm—oh, the boy’s backpack. The man slung it onto the grass behind the wall, then sat on the stones himself. He kept quiet, far more patient than I would have been.

Something was happening to me behind my glass screen. I thought of how families split, scatter, merge and collide like the sunbeams that were dancing off the hood of my car and transforming these people into chunks of light and dark.

And then, though I was probably about the same age as the man, I was drifting into the boy’s body as if he were a cartoon outline waiting to be filled. Like many others, I’d experienced the same sort of situation myself—and responded with the same lousy posture.

“I’ve got half an hour,” the man finally said, peering at a blob in his palm that must’ve been his phone, “but you’re due at school in five minutes.”

More silence between them. Grumbles of passing traffic. I could hear my breathing getting rough. Then I was up and bolting, grabbing the turtle from the grass, dashing headlong across the street to put all this shit behind me. Brakes screamed, horns blared.

It was the boy running from the man, but I was there inside him.

The kid dodged an SUV that screeched to a stop. The backpack swung wildly, his limbs so splayed they could have broken off. I felt my own arms trying to yank out of their sockets.

Ignoring the angry horns, the man got down from the wall and watched the kid sprint. At least he was headed toward school.

My coworker crossed the street during the honking fit. Shaking her head, she opened the passenger door and handed me the two coffees. “What the fuck are they on about?” she said as she climbed in.

“The usual,” I answered.

The man was still staring up the street as we pulled away. I watched for the boy during the next two blocks, until we passed the school, but he’d vanished in the morning flares and shadows.

Sam Gridley is the author of the novels THE SHAME OF WHAT WE ARE and THE BIG HAPPINESS. His fiction and satire have appeared in more than fifty magazines and anthologies. He has received two fellowships from the Pennsylvania Council on the Arts and a Wallace Stegner Fellowship from Stanford University. He lives in Philadelphia with his wife and neurotic dog and hangs out at the websitehttp://gridleyville.wordpress.com/. 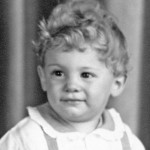