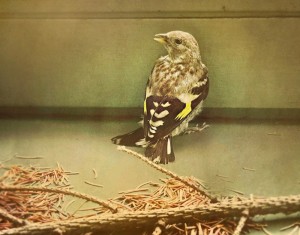 Lunch at What Was Once the Depot


A small bird lands in the brush near the street
after my chicken sandwich arrives and he will not
stop talking to me. Pesto, ciabatta, distracting
clicks and whistles and rustling of leaves. A fly
rubs its hand together, risking its life at the edge
of the spout, where a spot of heavy cream turns
into a small porcelain ewer. There are rules
to language. Ewer seems far too effluent to be
a place for milk. There are rules to the brain and
its placement, its organization of things: Spanish
and English, for example, are stored separately.
I am clicking the back of a pen and tapping it
against my teeth, constantly distracted by the tiny
bird making racket in the brush near the street.
Glowering, I return to my studies when a man
in a camouflage cap asks directions to the train.
What I tell him is mostly accurate. You are almost
there, I say, take a left at the stone staircase, go down,
you’ll see a plaque announcing the 1996 landing
or passing of the Olympic torch, churning through
town to Atlanta. Already they are stringing lights
through the trees. It’s hard to be nostalgic when
you are never far from home. Grounded, unmoved –
see also – Stagnant, unused. There is no possibility
without risk. The post of every bike rack is shackled
to a bike – that is, grounded to the mobile part
of said equation. Three pigeons on the tinstone
station ledge, and already I am worried
that equation was the wrong word. But it’s too late.
The waiter in the Reebok t-shirt has returned
with the bill, and I still have to be at work. To think
that another in the same situation might carve
his name, or near directions, in unrecognizable script
or dip his fingers into a sweet light coffee to stir
the cream and save the fly and slowly sip what’s left
past staining teeth and souring tongue, close his eyes
and breathe the subtleties of therapeutic rewiring, muted
wail of a train, wherein whose wake he once set down
some Swedish fish, a plastic comb, his first handful of coins.

The Boat We Rode in on Sank

and my arm fell asleep beneath your neck. Rocking
steady at the precipice of great falls, gently, you wept.

We gathered what we could find and turn quickly into
kindling. A knife loping sprigs of green from logs.

The auspice of great cranes which fell and became
craters, or cupholders, depending on what you prefer

to gain. Another beer? Sure. Let’s make this interesting.
Let’s be in our right minds when we bring ourselves back

to the soil, upturned with broken-bottle spades, graves
crowned with bottlecaps. Do you believe the whispering

of dual-turbine engines? The 4:15 to Cleveland is low enough,
it seems, to touch. Which means we have rediscovered

at least a hint of path, or pathos: the old dirt road, carved
into the beach of rust and worry, eaten in meters

by the over-indulging ocean – the spirited, fatherless sea
losing itself to itself through a fury of buckets, flotsam

foaming in deference to the auspice of stars it reflects.
Lit by firelight, she folded her everloving arms and said

If it came down to it, darling, I’d cook and eat you, I promise.