pace between the less expensive Chinese restaurant and

the most expensive coffee shop. they have brought

out their peppermint mocha because once Halloween

is over, Christmas is just beginning. holidays are lifeblood

in New England. they provide something to look forward

to when the weather becomes an unbearable inbetween.

we debate: where is the best Christmas? if you could be

anywhere, where would you be? New York at Christmas

time is unanimous: the lights, the colors, the pure white

corners. but the rest of the year, we say California: why

and public transportation that stalls with the first frost?

my parents ask me why i’m not considering staying. i

say: i want an adventure. i want to experience something

completely new which in a way is absolutely true but in

another way is a lie as white as old New York snow. is

it not time for me to fly the nest? i don’t want to hibernate

any longer; let this winter be over soon. peppermint only

tastes good while the snow remains white on the streets.

this house grows tired, the paint in my room slowly fades.

i forget to flip the pages on my calendar until halfway

through the month. as time stills i remember that though

i know i’m ready to go, that doesn’t always mean i want

to leave. even Concord, the most beautiful in the fall,

knows that autumn has to end eventually. every era has

its eventual end and we know. we just swirl along with it.

i’m walking back from the staff lounge at 11:47 pm and

the moon. i see the moon, bright white and i know it’s

just reflecting the sun from the other side of the planet

the same. just because it’s not a self-created light doesn’t

take the brightness away. sometimes the reflection can

be brighter. the path it creates across the water seems

solid. seems walkable, as if i could follow it to where

you are, as if it could lead me to the stars shining bright

above. i know we all see the same stars no matter where

that’s how all the constellations are the same. uniform,

residents searching across the lake for a little connection.

Lanie McLeod is a 18 year old poet from just outside of Boston, Massachusetts. She has previously been published in Body Without Organs, as well as literary magazines at her schools. She runs Harmonically Sound, a blog about how music and culture interconnect. Her life goal is to someday be fluent in French. 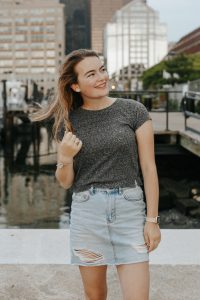