Two Deaths Foretold: Yours And the Weatherman’s by Joseph G. Peterson 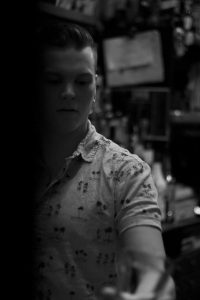 You sit at the bar every afternoon and avidly watch the local weatherman not knowing that you and he shall die at exactly the same time within the next three years.

You and the bartender watch the weatherman go through his routine—it’s part of your routine. When it’s snowing out, the weatherman tells you with satellite images that it’s snowing out; when the weather is 75 degrees and cloudless with five-mile per hour winds he tells you that this weather will last for the next three days and then it will either spike or collapse depending on what’s blowing in from the northwest. He will tell you when you can no longer bear the heat that the heat-wave is due to an El Niño effect—and it will continue into the next seven days; he will also point out that we are in the middle of a three-year drought, he might also tell you that lake levels are at an all-time low and he will advise those who have breathing issues to stay indoors. While he tells you these truths, you drink your martini. You and the bartender like to talk about the weatherman as if he is a friend that is right here with you. I like his suit today; the bartender might say. Or you might point out: who else but a local weatherman can get away with wearing such ties. But the weatherman’s voice, his gestures, the way he combs his hair into a comb-over, his gentle sense of humor are all so pleasurably avuncular. It’s one of the great amenities of this place you think, that the bartender understands the importance of keeping the television tuned to the local and not the national weather station.

One day in the not so distant future, let’s say, within the next nine-hundred-and-seventy-two days it will come to pass that this very weatherman will be at the ninth hole at the Kemper Golf course for a benefit. In the days leading up to the benefit he will predict thunderstorms and a plague of hail and yet he will defy his own predictions and show up on the golf course because the benefit is to raise money for leukemia and his own son suffered and died of that dreaded disease. All this information will come out later in the news: that the weatherman’s son had died of leukemia, that the weatherman was at the ninth hole at a leukemia benefit when, as he predicted, a tremendous thunderstorm blew in from the northwest; but the news accounts will also say how even our very own weatherman had lost his life, killed by that thing his charts couldn’t contain: bad weather. The weatherman was striding across the golf green with putter in hand when a bolt of lightning hit him.

Nor do you know that at the very instant the weatherman is struck by lightning you too shall be struck though by some internal electrical storm which shall lead to stroke and with the hail battering your window you will breathe your last. You and the weatherman shall die together though he on the golf green and you alone in your own bed and in your sleep and it will be several days before your dead body is discovered in the wreckage of your apartment. During that period of time—from the moment you die until the moment you are discovered—the bartender will gossip with anyone and everyone who walks through the bar and he will talk about the weatherman with whom he has become obsessed. Can you believe, the bartender will say, that the weatherman was struck down by lightning? The weatherman couldn’t even avoid his own death by storm! And how many times has the great Trevino been struck but never once killed. Maybe it was his outrageous ties that tempted Zeus to strike him down with a thunderbolt!

It goes without saying that the bartender won’t even notice that you stopped showing up at the bar. Nor will he know why you have stopped, and when he discovers why: that you had a stroke and that you had lived a tenuous existence of pecuniary, he will hardly care. He has only room in his heart for the tragic death of the weatherman.

Nevertheless, today is a typical day and you and the bartender are lost in the quotidian. You are drinking your martini; he’s drinking a beer out of a glass. You smile with the bartender at the silver lightning bolt on the weatherman’s red tie; you comment on his messy comb-over.

“Yep, that’s the way with these local guys,” the bartender says in agreement.

At commercial break you gaze out the window of the bar and you see in the distant sky a long shapely V caused by Canada geese. They are flying high in an azure blue broken up by giant puffs of white clouds. It is the longest such V of Canada geese you have ever seen. It is so long a V that at some point you simply lose its thread.

Joseph G. Peterson grew up in Wheeling Illinois and attended the University of Chicago. He is the author of one short story collection, Twilight of the Idiots;  a novel in verse, Inside the Whale; and of four novels, most recently, Gunmetal Blue (2018). His next book, Ninety-Nine Bottles, is forthcoming from Torttoise Books. His stories have been published in numerous magazines including, Anthology of Chicago, Joyland Magazine, Banango Street, and Akashic Books. 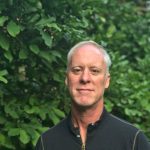