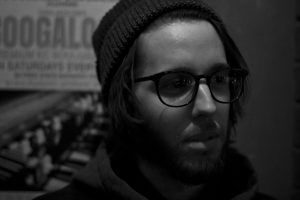 He glances downward to the notebook on his lap. The paper protests, old and brittle against his fingertips as the page turns over.

Two knees steady the steering wheel as his hands fumble through pages of hastily scrawled names. Trees and people flutter past his window—out of focus distractions as he untangles the spiraled cord of the handset. A soft click at his thumb and a static crackle from the speakers on the roof startles the tree sleeping birds as the rusted car sways slowly down the street.

A soft chatter from talk radio fills the void left by his brief reprieve from the list.

It’s like, you know, how Einstein already proved you wrong in 1909 though. Time only exists in equal relativity to space and matter, you know? So, there’s no passage of time without the presence of space and matter—or, like you said, you and me and this moment right now. See what I mean? Right now only is because you and I are here having this conversation. Otherwise, there is no now.

The back of his hand wipes against the heat filtering in through the window, clearing the sweat from the side of his face. He reads his names, one after another into the handset, growing warmer with each announcement. A thin shirt sticks to his torso, damp from his day’s work. A dark gathering of clouds shadow the passenger seat. He leers longingly into the shade, his fingers tracing the division of sunlight and darkness at his side.

The notebook lays open across his lap while violent anger rushes towards him from every angle. Hands wave dramatically through the air, emphasizing dramatic words. Angry heads nod in agreement with the general outrage of the room. Bursts of contempt shoot towards him. He sits, and listens, his fingers tracing the names.

Dissidents line the wall behind the accused. One after another, people are seated at the witness stand, swear to tell the truth, then unleash a terrible experience of suffering. He sits, quiet and still, as the wave of discontent crashes down upon him.

“I worked so hard to move past what happened. For years I couldn’t leave my house without running into something that reminded me of him. My sweet boy. Everything made me think of him—makin’ me miss him even more. It was unbearable—but I held on. I trusted in God that I would get through it, and I did—until last month, when I heard his name shootin’ out over that damn loudspeaker. It all came back, and I don’t know. I just don’t know if I can go on like this.”

The names flow from his mouth as he steers the tattered car up and down the streets of neighborhoods. He no longer pays attention to the names. Instead he focuses on the clicking of the turn signal, the gentle whirr of the old transmission as he accelerates through the town.

He remains present in the activity of driving and speaking the names into the universe, while the car flows down the street like water towards an open drain. The gentle breeze tussles his hair through the open window—the cool promise of yet to fall rain on the wind.

The deep creak of tree trunks as they stretch into and against the breeze stops his breath short—the muscle memory of anxious anticipation and soft breath on his neck a welcome reflex.

Okay. So, suppose you’re right—and I’m not sayin’ that you are, I concede nothing here—but, let’s say you’re right about now.

I’ll humor you for a minute.

Let’s say now only is because we are. This instance in time, hell I’ll even go so far as to say time itself, only is because you and I are here, present in this place right now. If a series of mathematic formulas on a chalkboard are right, then how do you explain the past?

How do you explain personal memories?

How do you explain the well-documented instance of, oh I don’t know, all of recorded history? There are a lot of people with a shared recollection of places and times that they weren’t present for. Is all of that history simply a Jungian figment of an entire species’ imagination if they aren’t there in those moments for all of eternity?

They sit quiet and still. Neither one daring to say a word, both terrified to break the beautiful spell cast upon the day. She lies across the smooth leather sofa, her head resting in his lap. His fingers trace a perfect line from the middle of her thigh up over her hip onto the narrow of her waist—lingering then tracing back down the same path.

She rolls over, her fingers reaching up and combing through his long black hair, pushing it away from his eyes. A soft breeze blows in through the open window carrying in the scent of cool summer rain.

One after another people from the neighborhoods take the stand. And, one after another they unfurl the emotional trauma caused by the repeated assault of having heard the name of loved ones, recently or long since dead, shaken free from dark corners of memory and thrust back in front of their faces—demanding to be acknowledged, requiring to be actualized.

One witness sheepishly admits to feeling gratitude at having heard the name of their loved one spoken back into the world of the living—confirmation that they once were and once mattered. Several more witnesses share similar sentiments; however, all testimony agrees that the noise disturbance is a nuisance that cannot continue.

The man sits still, in the seat he was instructed to occupy and listens earnestly to the testimony against him, running his fingers across the names in his notebook and concentrating on the smell of shampoo.

I hear you. But here’s the part you’re not taking into account. So, we can agree, for the sake of argument, that the present only is because of space in relation to matter, yes?

Can we agree to that? Good.

So, if this is the foundation we’re working from then the concept of past is at best imagination. Right?

The fallacy in that line of argument is that it works from an assumption that time is linear. That time rolls out in front of us like a path that only goes in one direction. Now, I’m no astrophysicist but even I know enough about the principles behind string theory to confidently assert that the math in that premise just doesn’t add up. And, I know our listeners are gonna light up the lines here in a second to tell me exactly how that math does or doesn’t add up, but that’s not the point.

The man seats himself at the witness stand. He satisfies the repetitious dogma, one hand on a bible, and settles in for the aggressive line of questioning that is sure to follow.

Instead, the question is simple.

“You’ve heard all of this testimony against you. You’ve heard how you’ve drug up painful memories from these innocent peoples’ pasts and forced them to relive their grief. My question is this. Why?”

He looks out at the anger, the pain and the vivid recollection across the faces in the room. He sees the subtle vibration of their memories at their feet—soft displacements of light and gravity waving and shimmering in front of them. He opens his notebook, runs his fingers across the list of names and leans in to the microphone in front of him.

They lay, naked beneath a crumpled white sheet, limbs entwined.

Giant windows soak the white walls and high ceiling with the pastel sun. Her fingers absently run through his short graying hair, her soft breath grazing the nape of his neck.

He breathes in the scent of her shampoo as deeply as he can, his fingers running a perfect line from the middle of her thigh up over her hip to the narrow of her waist.

The sound of old trees creaking against the wind blows in through the open window, and she shudders under the sheet. They pull their faces back and gaze into one another’s eyes.

The gaze lingers for hours.

Waves of emotion crash across the inches between their faces.

Dark pupils tell stories of loss, anger and depths of pain unspeakable. Irises explode like quasars with lifetimes of love and understanding. Light illuminates outwards through their eyes from deep inside of them.

All is laid bare. Nothing is spoken.

Finally, he breaks the perfect silence.

This might be getting a little bit out of the realm of logic and into the more poetic depths of metaphysics, but based on what we’ve established wouldn’t memories be the portal? I think that memories, déjà vu, unexplainable circumstances of shared experiences that haven’t yet happened are all the result of us summoning up those alternate timelines and willing them into our present reality. When we remember the past, the past exists, because we are engaging it in the now. When we have premonitions the future exists, because we are engaging it in our current collision of matter and space.

What can I say I’m a romantic.

Shouting cascades towards him. He pauses his recitation of names, and closes his eyes to contain the light pouring out from inside of him. He leans into the microphone again.

So all of human experience – past, present, memory, future – it’s all just a story written on a single piece of paper folded over and over onto itself—letting all of those moments, the pain and joy and love and loss all pushed together into one solid mass of experience. So the past, the present, and the future are all happening right now. Have always happened. And will always happen. And as long as we can understand that architecture and hold on to it, all things will always be. Am I getting that right?

I think so. But, I don’t really know. Maybe that’s just what I hope is true.

Knees on the steering wheel, he holds the handset close to his mouth.

z.t. wiser is a writer, teacher, and musician from a quiet small town in Iowa, USA. His works deal with the human experience, its complexities and effects; his writing has been described as “examining the reality of reality.” He is currently finishing his first novel. 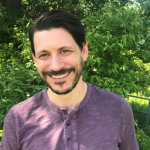