Everywhere I went
they told me to take off my hood
I was shiftless
like the yolk that bled across my bread
Each morning was a knife
In the park I told myself: you need to
grow up
dress like a woman
keep an eye out for trains
I wore my invisibility
like someone who hadn’t showered
and hid my ashy knuckles
in the pockets of my sweatshirt
My body rippled like a nerve, bearing the brunt
of a clawing wind. But
I kept my coat zipped up
didn’t let the fissure inside me show
Not in front of the friends I barely knew
Not over the crinkling mirrors of the canal
Not in a city where everyone around me
was white
on those hard streets filled with trash
pressing in indifferently
Outside, a viewing window pink
with florescent lights
haloed around a woman’s contour
This is a city for men, I sighed
Double jeopardy
and loosened my scarf in a coffee shop
I fantasized about crying
at the Anne Frank museum and
in the graffitied forest of the north
But no, I focused my eyes forward
Flint fixed to strike
Smoked joints
and went to see Van Gogh alone. Lingered
in the doors of sex shops until
I couldn’t stand it
and then fled
like stranger
I cowered
on the train back to Paris, in my mouth
the taste of Keemun tea
Amsterdam never got a tear out of me.

Johannesburg wants you
smelling the sweat and diesel on its throat
It wants to slap your ass
as you buy sunglasses and hard oranges at a stall
It wants
to drag you between its molars like
floss.
It wants you
to make it bleed from sore, throbbing gums
wants its hot blood striped on your skin
You are not allowed
simply to pass through to
Harere, Cape Town, Maputo
You have to hustle just like everyone else
step over steaming gutters and
shivering street men
kick aside
naked corn cobs, gnawed and dry with saliva
For the first time you clutch your bag tighter as
you cross the street
weaving through traffic and licking your dry lips – hey baby
hey baby, need a taxi?
A hand tries to take your duffel
and dump it into the trunk of a cab
A man tries
to drive you away from the station, but
you never wanted to leave
You squeeze between unimaginable people
Your eyes scale up grimy buildings that were once glamorous
windows of broken glass spidered with dirt
You forget
the men who helped you find your bus
the hot food dished out at the market
laughing schoolchildren
drawing their math homework
with chalk on the concrete of a noisy park
All you understand is
your plans falling apart
like knives from your hands
Someone is coughing at your neck
selling old shoes
spitting at the tires of a kombi
Some strange woman whom you’ll never meet
sharpens her teeth on your expectations.

a garden of wind chimes
the germinating morning glories
hibernating in wet paper towels
rows of toothache plant
and tatsoi greens
the tomatillos that invited themselves to the soil
the weed-quick tomatoes
the salvia, the San Pedro

. . . . . . . I come from
the unturned compost
the dropped guavas
that are overripe, bursting
with seeds and dizzy-sweet pulp
the buzzing Japanese beetles dodging
the beak of the chicken like acrobats
Tree stumps, bonfires, and bubbling hookah
and peeling the scratchy-throated leaf wrapper
from gooseberries.
From the walnut-fat spider
dragging her body through the orange tree
with lazy toothpick legs

. . . . . . . I come from
the delicata squash
yawning up
from the dirt
stretching an arm here
there
to every corner of this cramped little garden

. . . . . . . I come from
yarrow
stretching my medicine across your tongue
I am a sprout from a watermelon seed. I am the tiny broccolini
the inhalation of wet mulch
burning scrap wood
the rich scattering of ashes, the smoke
I am the Swiss chard bolting – just look at me and my red!
I come from the dirt.

We were children gathering the night around our feet
drawing down the moon in our sun-dipped hands, running
with our hair out in the warm spring rain
that pressed its beads to the earth

We picked berries from holly trees, using their mashed glue
as cement for the fairy houses we built
out of abandoned bricks in the woods behind our house
We lay under the thatched night sky and fell asleep to spiders

In those days, summer flickered on like a light bulb.
And we squeezed lemons into sour juice, selling dad 50-cent cups
while he mowed the lawn
We caught snakes in the ivy patch curled in the front yard
—snakes coyly unalarmed at their discovery
lured bees into our cupped palms with applesauce.

We drank root beer by the creek at Norton swim club
back when four dollars was a fortune, splashed
water onto salamanders fumbling over the rocks, sinking
up to our ankles in the silvery soil of the bank.

Some copper evenings, we crouched on the back porch
grinning and rolling apples like balls of candy
to the deer staring at us with their blackberry eyes,
perched on legs
like stilts, vibrating violin strings, leaping away
through the sun shower like an opera.

Corinne Gaston is a writer, activist, traveler and novice surfer originally from Philadelphia. She is now based in Los Angeles where she continues her storytelling. In the past, she was the Editor-in-Chief and Co-Founder of The Interloper, an independent newspaper focused on Los Angeles communities and social justice. 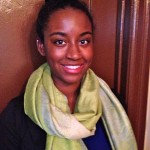