Trashcan Buddha by A. S. Coomer 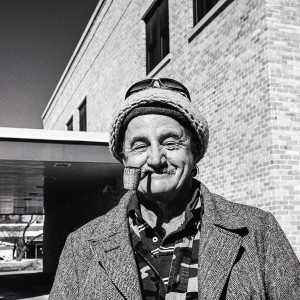 Days as bright as the midday sun reflecting off the crushed beer cans.

The world really tends to open up for one that finally gives up. You should try it. It’s liberating. Just stop. Just quit. It’s great. You’ll find you have all the time in the world to really just, you know, like, think about things. To really ruminate over the hopelessness, the pointlessness of it all.

Shit, I can go out and just lay in some overgrown lot, stare up at the drifting clouds and the dancing elm tree branches, if I wanted to. I’ve got all the time in the world.

“Got to be at work at least fifteen minutes early. Early is on time, you know.”

“Got to clock in at exactly the right time. Don’t want the boss to think I’m stealing minutes from the company.”

“Got to have the oil changed in the car at exactly two thousand miles or the date on the little sticker on the windshield. Whichever comes first.”

Sheesh, I mean it can really be a tizzy. Stress, ownership, I mean. It’s really a great thing, having only the clothes on your back. Only the shoes, just a small hole under the left big toe you see, on your feet.

Yes sir, this is the way people are meant to live here in America in the twenty-first century, under God’s blue skies, his cracked concrete haven we call Toledo.

Yeah, the winters can get cold. Mighty cold. Snow too. Ice, all that. But I’m young. I’m stout.

Do? Why, I live, damn it. Haven’t you been listening?

Yeah, I’ve heard them call me that. Trashcan Buddha. I’m laughing because it’s kind of funny, you know, comparing me to some, like, religious being. Like a god or something.

No, I don’t know why they call me that. If I had to venture a guess? Well, let me think on that a minute. I’d say it’s because I’m always smiling. You know I know next to nothing about the real Buddha and his Hinduism or whatever but I have seen the fat sonofabitch sitting on the pristine shelves of Target–when I used to frequent that establishment in more, like, involved and complicated times for me as an individual–and he looked just as happy as a pig in shit. I mean, he always seemed to have a real shit eating grin on that fat mug of his. I guess, people just see me a-smiling and see a similarity, like, physically.

Well, hold on. Well, I wouldn’t say I’ve tried it, suicide. I would say–

Yes, I know what I said. I’ve been up on those railings many a-times and no, I wouldn’t say I was going to commit suicide. It was more of a waiting to see if I’d slip or something. I’d be up there like some indian, doing a tightrope rain dance of sorts. If I slipped and went then…well, I went. That was that. It would’ve been an end to the, like, suffering. I mean, I was really suffering. I was sick with it. Always and forever worrying. Worrying, worrying. Nothing ever seemed like it was going to work out right. Nothing was going to come clean in the wash.

What happened? Well, you could say life happened. I’m not the smartest man on the planet. Hell, I’m not the smartest man in Toledo, for Christsake. Life had probably been screaming at me to chill the fuck out for some time. Years probably. It’d been terrible for that long. I guess one morning, I think it was a Tuesday, isn’t it always a Tuesday? I mean, everybody has a beef with Monday but Fuck Tuesdays, you know what I mean? They’re the absolute, God’s Honest Truth Worst. I woke up this Tuesday, not like this Tuesday or the last one or the one before that but, like, many Tuesdays ago, and I was just as low as you can be. I mean, I was subterranean I was so low. I couldn’t get my body to move out of my bed and it wasn’t because I’d changed the sheets the day before and they smelled like a golden sunlit pasture covered in Gain either.

I was just there, under the sheets, not quite Egyptian cotton but not Motel 6 either, and the comforter, alternative down and wonderful, like suffocating in my suffering. I couldn’t breathe. Fat smiling Buddha himself could’ve been perched right there, indian-style, on my chest, for all I could breathe. It was like weightlifting without the weights, without the spotter. Awful.

Do? Well, in, like, a flash I threw all the covers off and shot out of the bed with all the quickness of, say, a scared cat or something. I flew like a goddamn bird of flight right out of my bedroom, down the recently vacuumed hall, into the living room, the area rug recently beaten and powdered and vacuumed, into the front foyer, shining with a fresh coat of wax, right out the front door, whose paint I recently touched up, into the streets, out of the neighborhood, down the cracked, slanting sidewalks. I ran by buses full of children getting hauled like sardines to school. Passed cars full of people heading to work or just getting off work. Trucks delivering beer to the bars, food to the restaurants, papers to the newsstands.

Naked? Yeah, I was naked. I slept bare-assed naked back then. You would too if you felt those sheets. Anyway, I ran and ran and ran. I had no idea where I was going. I just had to, like, get away, you know?

What from? Like, life. My life. My struggling, suffering, laboring, sweating, stressing, pacing, all of it. I just had to get away. I wasn’t sure where I could go where I could do that but I wasn’t, like, really thinking you know. Not like logically or anything. It was the motion of it; it was freeing. Movement, to finally be moving to some sense of relief, was tremendously, like, gratifying.

Smiling. Yeah, I guess, I couldn’t help but be smiling. I read that in the papers too. Which one did you say you were from, again? Oh. Ok. Yeah, I was smiling. I think I started smiling as soon as my bare feet hit the pavement in front of the house I used to live in and I don’t think I’ve stopped smiling since that Tuesday.

What happened? Shit, you all reported it. You know. I went up there on that bridge, it’d just opened up, remember? Been closed like over a year or something. And I started pacing around, just smiling like the goddamn Cheshire Cat or the Joker or some other nutball. Well, somebody called the cops. Toledo’s finest. They showed up, first just one car. Then another. Then another. Then, like, and I swear to God, the entire damn police force was there.

Saying? They were saying things like, ‘Sir, you need to calm down’ and ‘sir, where are you clothes, sir’ and ‘do you have a weapon, sir’ like I wasn’t buck-ass naked. Where did they think I had a weapon, like, up my ass or something? Tucked up behind my nuts? Well, eventually they started getting too close and I, like, panicked. I hopped up on the railing. I’ve always had great balance–used to be crazy athletic as a kid, gymnastics, basketball, soccer, tennis, all of it–and I just took off, loping up the railing, up and up and up towards the center of the bridge. It’s a really pretty bridge. Like beautiful.

They followed me. Most of ‘em had their guns out, like I was going to suddenly grow fangs and, like, leap out and attack them, pull the gun they thought I had tucked up in my gooch, cause a threat to public safety or something.

Jumped? Hell no, I did not jump, sir. They tased me. Have you ever been tased? You can’t, like, control your body. You go all rigid and, like, thousands and thousands of bees fill your body, electric bees, buzzing around zapping every bit of you with their shocking stingers. No, man. I didn’t jump. I told you, I never tried to off myself.

What happened next? I don’t remember. It was like one second I’m up there, running along, smiling at the pretty bridge, getting away from the suffering and all that and the next, well, the next there’s a lot of buzzing and spinning and my stomach dropping to somewhere around my ankles then nothing. Absolutely nothing.

Visions? No, I didn’t have any visions. That’s rich. No, apparently I smacked into the water pretty close to the rescue boat that was already “on-scene” and they got to me real quick. Said I was out cold. Bleeding from my ears and nose and all that.

I woke up at the hospital. I woke up, my head all bandaged, tubes and wires and what all hanging out of my arms. Under this itchy sheet. Gowned in a thin little hospital getup. There wasn’t nobody there when I woke. I just lay there, looking around the room, looking at the shit going in and out of my arms, feeling the bandage on my head, just knowing that I was alive. Sore as hell, a little sick to my stomach and one hell of a headache, but alive. I felt my lips crack all over when I stretched ‘em out for a smile. They were that dry. I guess they don’t have Chapstick over there at Mercy St. Vincent.

Yes, I’ve been smiling ever since. I smiled when they loaded me up into another ambulance and hauled me over to the new psych building at St. Charles, little paper cups of goodtime pills and drooling and pissing on myself. I smiled and smiled. Don’t know how long I was there, can’t remember most of it. You could probably find out, Mr. Investigative Journalist.

Doesn’t really matter though, does it? I got out. I smiled through the social worker’s talking, and Lord did she talk. I smiled when they released me, papers in hand. Smiled as I slipped into the Salvation Army clothes she got for me. Smiled as I stepped out onto Wheeling Street and the crisp autumn air without a thing holding me anywhere. Just trees and the chilly breeze and me.

No, I didn’t go get anything from the house. I don’t need any of that stuff. It’s from another life, you know? All that stuff would just, like, clutter up my existence again. I don’t know what happened to it. I’m guessing, Leo, that was my landlord, like sold or auctioned or donated my stuff and then rented the house to the next poor schmuck. It doesn’t really matter to me. No skin off my back, you know?

Advice? I’ve got no real advice. I know what works for me, is all. All these things I’ve said. They’re me, you know? My life. My suffering. All about me. I don’t know what’ll work for little Suzie or Johnny or Tim or Michael. I don’t know them. Sorry, Trashcan Buddha has no golden nuggets of wisdom for modern readers. No real, like, insight into modern plight or whatever it is you’re searching for.

A.S. Coomer is a native Kentuckian serving out a purgatorial existence somewhere in the Midwest. His work has appeared in over thirty publications. He’s got a handful of novels that need good homes. You can find him at www.ascoomer.wordpress.com. He also runs a “record label” for poetry: www.lostlonggoneforgottenrecords.wordpress.com 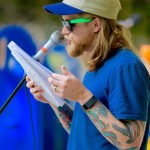