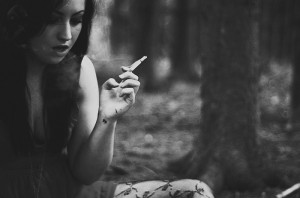 If we were snowed in at an antlers-on-the-wall bar somewhere. If the colored lights were low, dancing and swooping at our feet. And something like “Mamas Don’t Let Your Babies Grow Up To Be Cowboys” was playing, the sound swimming all around us like swirly cartoon smoke. Would you stand up and sway with me? Tell me I’m the prettiest girl you’ve ever seen? Hold my hand real close, tucked in between us like a little animal we wanted to keep warm? I can get real quiet and hardly say anything but if I got even a little buzzed at all I’d talk to you about my shows. About my crush on Raylan Givens. About how Tim Riggins would’ve smoked, damn straight. No way would he not smoke. He’d put that unlit cigarette between his teeth, his hair hanging down in his face; his plaid-flanneled arm would reach out for his brown bottle of Texas-brewed beer and he’d talk about touching God. He’d light the cigarette; fire-orange-sparkle-crackle and hush. You know what I’m talking about. How I can’t stand lies. How if something is even the tiniest bit wrong, I feel like it’s my job to do all I can to fix it.