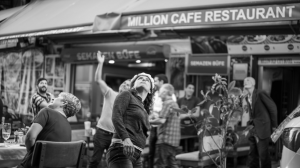 The Universe is Expanding

The world is moving faster and faster toward optimum mindfulness and a kind of cyber focus that I fall out of line with, the games and the selfies and the applications that have transformed me into a 21st Century Luddite, cruising from the waves of the archives my elders left behind for me to lose myself as an Indiana Jones seeker of admiring girls, teaching college to the hip sexy kids while I chase down the ark of the covenant, in my case a poem that’s better than any woman I’ve ever fucked, superior to any chill down my spine at the end of a film I’ve never forgotten after all these years.  I’m not afraid of girls anymore.  They’re afraid of me.

Underneath a Bridge Waiting for the Bats to Appear

we stand among the twilight crowd

all of us waiting for the world’s

largest colony of bats to appear,

and we grow bored enough

to ogle the leggy young ladies

who keep waving their paranoid hands

in the air to ward off phantom bats.

After a long and tedious stretch

of time has been wasted, my friend

tells me this is the first time

the bats never soared above the crowd

and the bridge in a void of flickering wings.

I do not care because we are shocked

by the buzzing hum of the bright

electricity in every human smile.

They all slowly pack up their things

and disappear into the night

before the bats transform

into vampires with a

as they sink their teeth

into my neck and I join them

nose diving into the crowd

who all join us for

in the heated fever

of a midnight dream.

She stopped fucking me,

told me I needed to fuck

in my lifetime.  She did it,

everyone else did it.

So why the holdup on my end?

She decided to go and die on me,

leaving me with no choice

but to find somebody else to fuck

who will give me shit

for not fucking more people

until the human race

my lack of fucking,

not a single baby

But she’s dead and so

is the majority of my family,

which means they can see me

down here,  in a world

where even the dead

are getting laid, but not me.

Kevin Ridgeway is the author of “Too Young to Know” (Stubborn Mule Press). His poems have recently appeared in Slipstream, Chiron Review, Nerve Cowboy, Main Street Rag, San Pedro River Review, Into the Void, The American Journal of Poetry and So it Goes: The Literary Journal of the Kurt Vonnegut Library. He lives and writes in Long Beach, CA. 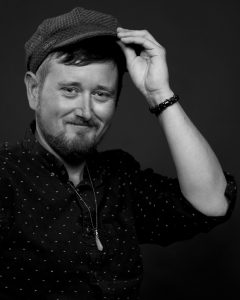