Then I Felt the Floor Beneath Me by Charles Rafferty 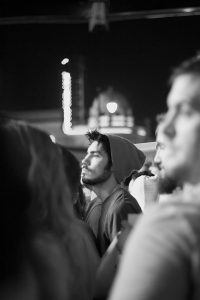 Jill was due in a month and the tech company I was working for had just laid off most of the pretty girls. It was 2001 — just after the Mir space station fell into the ocean but before the attacks on the Twin Towers. The company wanted to boost morale, to see if we could “reboot” ourselves and start making money again. So on a Friday night in April, we were treated to drinks and Chinese acrobats. Spouses were welcome. We headed to Manhattan in style aboard three charter buses.

Jill and I sat behind Evan and his wife, Marna. Their first child was one-year-old and they were grateful for a night in the city. They had gotten a sitter and were overdressed — he in a blazer and tie, she in a scarlet cocktail dress with spangles along the neck.

“You’ll love it,” Marna insisted. “Evan was there to cut the cord. It was the most fulfilling day of our lives.”

Every couple we encountered told the same story — how the last trimester was their favorite, how the blood and uncontrollable urination of the delivery brought them closer. Jill, on the other hand, was sleepy and putting on weight, and I had taken to buying Tums with my cigarettes. It was a scary time. Jill had lost her job, and my own company seemed suddenly unhinged. We had just laid off a hundred people, and now we were passing bottles of scotch and vodka up and down the aisle of a charter bus.

“There’s nothing more rewarding than cleaning my son’s bottom,” said Marna. I looked over at Evan, but his eyes shone with earnest agreement. Jill pinched at my arm.

“I just hope the seats in the theater are comfortable,” said Jill. “Whenever we go out now, I just want to sit.”

“David and I always make time,” said Jill. “You know what he did for me once? He took me to look at the Mir as it flew overhead?”

“It’s when we were first going out. Back in college.” She took my hand as she spoke but the others couldn’t see this. “Mr. Science here brought me out by the lake one night to have a look.”

“Sounds like a cheap date,” said Marna. Then she turned to Evan to ask for the name of a movie she’d forgotten.

The theater, it turned out, was on a street too narrow to accommodate our buses. We got stuck halfway down the block when someone’s car was parked too far out from the curb. We couldn’t get by and backing out was impossible. We would have to walk.

“I hope it’s not far,” said Marna. “It’ll be murder in these heels.” She stuck her foot into the aisle so we could see the frail stiletto. It looked as though it would turn to splinters beneath Jill.

When we arrived at the theater, a man with a tiny xylophone was already walking around the lobby, hammering the keys and asking people to head into the performance space. We were allowed to take drinks inside as long as the containers were plastic and had a lid, so I ordered two scotch and sodas at the intermission bar, and a cranberry juice for Jill.

“I feel so sorry for you,” Marna said to Jill. “It’s too bad you can’t have one of these.” She took a sip of red wine through a tiny straw.

The theater was dark and cramped. A mix of late eighties metal bands blared from the sound system — Motley Crue, Dokken, Ratt. The black lights were on and everything was glowing as though someone had detonated many cans of fluorescent paint. Bits of bright confetti fell through the air, sifting from some perch up in the rafters. There wasn’t any seating. We were free to mill about. I rolled my eyes in sympathy with Jill.

High above us and without ceremony, acrobats in glittering unitards began walking across wires we couldn’t see. They somersaulted, they leaped, they swooped like hungry birds. Others built strange gravity-defying structures out of their bodies on the floor beside us. They encouraged us to come as close as we wanted. As I drained the last of my scotch, I remember thinking it was amazing they hadn’t crashed into each other — or into one of us. Jill leaned over and said she was going to the ladies room. The lights were making her dizzy and she had to sit down.

I watched as the door closed behind her, and then suddenly, spotlights began swirling over the entire crowd like deranged seagulls until eventually a dozen separate lights converged on my face in a blazing circle. Everyone started cheering as the Chinese acrobats took hold of me. They made me step into a harness. Wires were produced from somewhere up above and they began attaching them. I told them that I was afraid of heights, but it was clear they didn’t speak English. Then Marna, smiling, pushed me into the orange arms of one of the lady acrobats. A small green man took the empty scotch containers from my hands and floated upward.

Everyone was chanting my name as I slowly rose into the black rafters of the theater. The orange lady let go of me, and somehow, the acrobats began circling me like frogs or angels. It felt like I was caught in some kind of reverse whirlpool. It reminded me of a bad acid trip I’d had in college, and it was happening in front of the people who could fire me. I shouted for it all to stop, but the music only increased, and I saw my coworkers getting smaller as I swung back and forth above them until finally I had reached the very apex of the theater. Glowing acrobats hurried along the catwalks getting ready for the next set of leaps.

The scotch was affecting me badly. I worried that the thin wires would snap, that I would plummet to the floor, that I would pee myself as I died in a heap in front of the last good-looking woman in accounting. I held on as tightly as I could, but I was basically holding onto myself.

Then the music paused, and the spotlights again swirled in like a bunch of hungry gulls and came to a rest all over my body. The music began building as if some unstoppable grand finale were already underway. I yelled again, but it blended into whatever the guitars were saying. I began rising and falling, rising and falling, and I couldn’t see anything with the spotlights in my face. It was like they were trying to break me, to make me believe that I could die, that the wires that held me might as well be whiskers. For a moment, I thought about the Mir tumbling into the ocean, how it would have felt something like this if a cosmonaut had been left onboard by accident — waking to find himself hurtling to his doom. I couldn’t tell if I was sideways or right-side up. And then suddenly, impossibly, there were hands all over me. They guided me downward, and then I felt the floor beneath me.

I searched the crowd for Jill as they stepped me out of the harness, but I was still blinded by the spotlights. Then, amid the pounding music and the drunken back-claps of my coworkers, I felt what must have been Jill’s hand in mine, and I resolved to follow it wherever I was led.

Charles Rafferty’s most recent collections of poems are The Smoke of Horses (BOA Editions, 2017) and Something an Atheist Might Bring Up at a Cocktail Party (Mayapple Press, 2018). His poems have appeared in The New Yorker, O, Oprah Magazine, Prairie Schooner, and Ploughshares. His stories have appeared in The Southern Review and New World Writing, and his story collection is Saturday Night at Magellan’s (Fomite Press, 2013). He has won grants from the National Endowment for the Arts and the Connecticut Commission on Culture and Tourism, as well as the 2016 NANO Fiction Prize. Currently, he directs the MFA program at Albertus Magnus College and teaches at the Westport Writers’ Workshop. 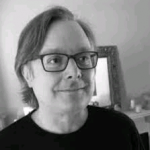