The Inarticulate by Klara Pokrzywa 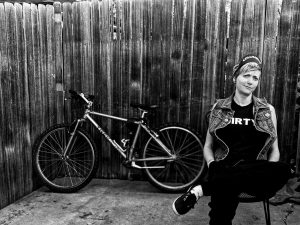 “Naomi is coming,” the first said.

“I haven’t seen her in so long,” the second said.

The first and the second exchanged a glance.

“Who’s Naomi?” the first said, not incredulously, but rather as if she were searching for an answer. “There’s simply no way to answer that question. You may as well ask me what the color red looks like.”

“You could try,” the third said. When the third was annoyed, she chewed on her thumbnail. She was chewing it now. “She’s just a person.”

The first and the second exchanged another glance.

“Well,” said the first, “if you went for a walk in the early morning, and climbed a hill to see the sun come up, and saw the first rosy sliver of light peak over the horizon just as you got to the top—and then you put that image into a person—that would be Naomi.”

“Do you know the feeling you get right after a plane lands?” The second said. “That feeling when you’ve pulled up at the gate and everyone is just waiting for the doors to open so they can get off, and everyone stands up because they want to be the first to leave? And you sit there awkwardly because you don’t see the point in standing there with a heavy bag just without going anyway and it’s not like you can really get off faster if you stand so you just sit there and stare at everyone’s belts impatiently because that’s all of them you can see with them standing and you sitting? Naomi’s like that.”

“Not only do those two things hardly make sense individually,” the third said, “but they definitely don’t make sense put together.”

“Well, that’s the truth,” the first said. “And this is also the truth. If you were waiting to get your coffee at a coffee shop, and the barista called out your order—your exact order—and you went up to get it, only to find that someone else had ordered the exact same thing, and now you have to figure out which of you the coffee was intended for, that other person would be Naomi.”

“Now, listen here—” said the third, but she was cut off by the second.

“Do you know the feeling of missing a step going down the stairs in the dark?”

“Everyone knows that feeling,” the third said impatiently.

The third began to chew her thumbnail with a greater degree of vigor than before. The first, however, nodded in agreement with the second.

“Naomi is more like falling down the stairs and landing awkwardly so that you twist your wrist. When you roll over onto your back, groaning, you discover that there is blood in your mouth. But you can feel that your wrist is not broken. That’s Naomi.”

“See, that’s where I have to disagree with you,” the second said. When he was thinking, his brows tilted so that they made two sides of an equilateral triangle. They were triangulated now. “Naomi is being intrigued by the title on the spine of a book on a shelf across the room, and getting up to look at it. But when you pick it up and read the first page, you realize that you’ve read it before. Or maybe that you even wrote it. That’s Naomi.”

“I don’t feel that I know her at all after all this,” the third said.

The first and the second sighed in unison.

“She’s difficult to describe, like I said,” the first confessed.

“She’s like putting milk in your tea,” the second agreed.

“Once, she gave me twenty dollars to buy a single jam donut.”

“She always reads the author’s acknowledgments at the beginning of books.”

“She says she never swears.”

“She’s knocked on my door past midnight before.”

“She wears a lot of velvet.”

“You really have to meet her.”

Klara Pokrzywa is a student at Columbia University studying English and Creative Writing. Her work has most recently been published in Blacklist Journal and Rumble Fish Quarterly. 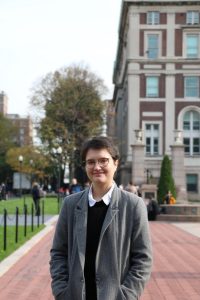