The Buggy
by David Starnes 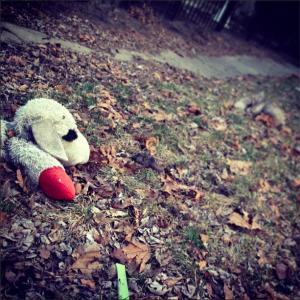 Since I was old enough to remember, Maury the homeless Pumpkin Man has always stopped by my house within three days after Halloween.  When I woke up this morning, my calendar read:  November 5.

While I miserably wait, Dad finishes picking through my haul, Mom harasses me about him hoarding all the chocolate, and I make my annual promise to stop trick-or-treating for them.  As a nineteen-year-old, it’s not like I blend well.  The shame of peeling off my manly ghost costume (a sheet with two holes snipped for the eyes) has just subsided, so I take a seat on the creaky swing hanging from the front porch.

Across the street, in the park I’ve never stepped foot in, the trees are naked, their leafy jackets dead and brown.  Above the exposed branches, the setting sun is as harsh as I’ve ever seen it.  Maybe because it reminds me of a bullet wound, seeping and red.  Or maybe it’s because Maury hasn’t shown up.  I know I haven’t missed him; our jack-o’-lantern’s still on the stoop, smelling sweetly of rot.

He should be here, grinning that warm but haggard smile of his, elbows propped up on that buggy he’s always pushing.

At this point in his journey, he’d have collected at least three-dozen pumpkins, all in various states of decay.  He’d be tired.  I’d ask him if he wanted a soda or some water.  He’d politely decline; say a juice box’d nice.  I’d get him the one hidden behind a tear-away panel in my closet, hidden away so Dad won’t steal it.

Behind me, Dad’s bitching.  I can hear him through the thin-walled windows.  He’s louder than usual; makes it hard to tell whether Mom’s crying because he’s spent this month’s bill money, or if it’s just because she’s furious he’s eaten all the candy.

That’s when I notice my hands are trembling.  I’m voluntarily wearing a t-shirt, so I can’t blame it on the cold.  I take several deep breaths, but they don’t settle the shakes.  There’s bound to be a case or better of Beast Ice in the fridge, assuming Dad or his buddies haven’t raided it.

No, never mind.  Beer’s not what I need.

I look down the street:  houses that mirror mine, faded pastels aside; a Dodge Charger that’s only undercover to the cop sleeping in it; a pair of mechanical arms that don’t keep anybody from crossing the train tracks.

I don’t bother glancing back before I start walking.

The pavement feels rough and broken through my worn soles, but it doesn’t matter; it’s good to be gone.  Where I’m headed forever, I’m not sure.  But for today, north, I think, the direction Maury comes from.

It’s stupid of me, but I check the ground for buggy tracks.  There’s broken bottles, crushed cigarettes, the chewed bones of a small animal.  On the porches I pass by, some of them have pumpkins; others have jerks that give me nasty looks, as if daring me to speak.

I’d like to, though.  Ask them if they’ve seen the Pumpkin Man.

But I go, because I want to make sure he’s okay.  His easy chats I look forward to every year.  It’s like he knows me, knows how hard I’ve got it.  He’s heard Mom and Dad scream at each other, even been on the receiving end of their insults.  Maury can’t help he limps, can’t help his clothes aren’t much better than mine.

Eventually street lamps and a sky greasy with smog replace the bleeding sun.  No clue how long I’ve walked, and there’s no telling where I am.  At the next street there’s only one way to turn, and when I do, in the dim glow of porchlight, the stoops become suddenly bare of rotten fruit.  A couple of dudes are hanging out, smoking, laughing, paying me no attention, as I’m far enough away to stay off their radar.

The two that heard me, look at each other, take long sips of their beers, then toss their cans in the street.  The one on the left says, “That the hobo that digs through the trash?”

Damnit.  I didn’t want to sound scared, but it happened anyway.

“Yesterday morning.”  He points at me.  “Saw him where you are now.”

“Not my job to know.”  He nods at his friend, and they go inside, slamming the door behind them.

The thought of punching that guy in the face is nearly overwhelming.  Again, I don’t do this.  Not for fear of what’ll happen to me, but because getting my ass kicked won’t do anything to help Maury.

I look around for anywhere he might be.  Off to my right, before the rows of houses thicken, sits a tree-filled lot with the occasional flickering lamppost.  The city calls it a park; everyone else calls it a dumping ground–some garbage, mostly the homeless.

God, why didn’t I think about it before?

I take off, pumping my arms as I run.  Push past low-hanging branches, searching.  “Maury!  Are you out here?”

I pause long enough to listen.  Nothing.

The more ground I cover, the tighter my chest coils, the more my heart hurts.  About two hundred feet ahead, I hear rustling.

I bust through the clearing.  Then I stop so suddenly I almost fall over.  There, on its side, lies Maury’s buggy.  Beside it, a stray devours a pile of smashed pumpkins.

“Get-get outta here,” I say, waving my hand pitifully.  The dog just eats.  I call out Maury’s name, though he’s nowhere I can see.

He’s gone, but not in the same way I am.

I pick up the buggy.  The push-handle is sticky with blood.  I want to cry.  Whatever energy I had getting here’s gone, leaving me empty and dry on the inside.  I can’t shed a tear for this man, my friend.

So I spit on my hands, wipe clean the handle.  And then I begin to push.  There’s pumpkins that need collecting.