I can squash racism in three generations, four tops, Melania said. She paused, waiting for me to ask how, but I knew if I stayed silent long enough she would keep going. Black dudes. Not just the ones here. All of them, Brazil, Nigeria, and that island Rihanna is from. If there was a new law that said Black dudes could only have babies with White chicks…Boom, bye bye racism. Who would be mad? Not Black dudes. Ask Kanye.

Melania was on one today. I decided to play my part and challenge her theory, but the idea area in my brain wasn’t sharing. I couldn’t come up with one White chick that might object to her new law. And then Ellen’s face did a jig through my mind. Lezbunnies would be mad, I said.

See the way Lezbunnies are set up, they ain’t fucking dudes. Just in case though, only Black dudes can be sperm donors, Melania said. I knew better than to bring up White dudes. White dudes ain’t never had a problem pollinating coochie of color.

Black women. Black women would be marching on Washington to protest, I said. Melania’s smile spread wide enough so that I could see the piece of gum she had tucked in her teeth. Oh lawd, she was giving me that look. She was about to go in.

No they wouldn’t because of mixed babies. You know Black women would cancel Christmas if they could guarantee their children got that Tracey Ellis Ross curl pattern. Tell me I’m lying, she said. Tracey’s curls could not be denied. The stars twinkled harder and shed glittery tears in her presence.

You wrong for that, I said, but I didn’t disagree with her. If we ingested all the White folks, we’d still fight about dumb shit. It be all Team Light Skin vs. Team Dark Skin.

Melania’s smile faded. Why won’t you let my new law be great? she said. You solve that other shit.

Evelyn N. Alfred hates bios because she doesn’t have an MFA or an impressive list of literary magazine publications. She reads a lot and will officially be a degreed librarian by the end of spring. She’s a fan of cherry limeade, twist-outs, and introverts. 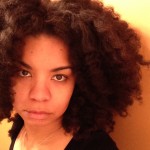