It’s my pleasure this month in Anna March’s Foundlings to offer a chapter from Antonia Crane’s critically acclaimed new memoir, Spent. Cheryl Strayed, author of #1 New York Times Bestseller Wild, says, “Antonia Crane’s writing is bold and beautiful and shimmering with light.” I couldn’t agree more–about both the writing and the woman. Enjoy this chapter–and please consider buying the book. It’s tremendous and you’ll be supporting indie publishing and a writer who does so much in service to the literary world–and the world at large.

New Century Theater was no theater. It was a cobwebbed dive on the corner of O’Farrell and Larkin Street, next to the famous Mitchell Brothers club. New Century was the Mitchell Brothers’ skanky stepchild. I was anxious about the audition, so I walked to the cornerstore for gum. A tranny in a wheelchair was bumming change out front whiles moking a Pall Mall.“Nice wig,” she said. I dropped a couple quarters in her Styrofoam cup. She glared at me. “You idiot. That’s my coffee.”

I scurried through the entrance to New Century and stared at the posters in the windows featuring stars with boobs the size of watermelons. No way would they want my barely B-cups. My hands trembled. “Can I audition today?” I asked the man behind the counter. He told me his name was Manny and handed me a job application form to fillout. New Century was a dark, musty theater with metal seats facing an enormous stage and a long, dramatic catwalk with poles on both sides of the stage. The air reminded me of old mattresses and Lysol.

“Go upstairs. I’ll come get you for stage,” Manny said. I walked up some steep, narrow stairs into an attic with a low ceiling and gray metal lockers. I put my bag down on a chair and got undressed. I secured my frizzy wig and attached my faded white wedding veil. I peered into the big cracked mirror and smeared on bright pink lipstick.

Downstairs, two identical twins were onstage dressed in black PVC dresses with ringlets that dripped down their backs. They were gliding across the stage to the Pixies’ “I Bleed.” Their creamy skin glowed illustrious under the lights, their dresses fell down to the black stage, and their eyes were locked together in an embrace. One unfastened the other’s bra. They were mesmerizing. I would have to do something extreme to get hired—I was clunky and out of shape. I had stage fright. I felt dizzy and clumsy.

When my turn came, I was blinded by the lights as “Cannonball” by the Breeders started. I jerked and moved too fast but couldn’t stop. Speed bubbled inside me and my jaw ached from grinding my teeth. I slipped into some cheerleader moves, but tripped. Claire’s shoes were too big. I held the pole and noticed goose bumps on my arms. It was freezing out here. At the end of the song I pulled my slipoff, tore the straps free then walked backstage. I fastened my wedding veil in place and crawled back onstage, punctuating the drama of Sinead O’Connor’s goth remix. I flung my bra into the darkness—towards the only man I could see. I aimed for his glasses,which reflected the stage lights. The song was ending, so I grabbed the pole and hoisted myself up to stand, pulled off my wig-veil and tossed it on to the stage in front of the man. I slid onto my belly and lay face down with my arms straight out in front. I figured the glasses man in the immaculate white shirt would give me my first lucky lap dance. 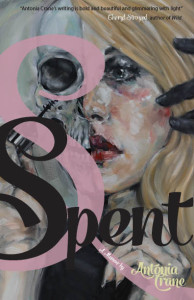 “Don’t ever do that again,” Manny said, wagging his finger at the wig in my hand.

“Do what?” My heart was about to explode on his shiny brown shoes.

“Oh. Sorry.” I fastened the wig back on my head. Being scolded wasn’t part of my feminist manifesto. “You want to work here, you have to work dayshift,” he said. He paused like he was expecting me to decline his offer.

“Okay, I will. Thanks.” I smiled widely and gave him a thumbs up and walked into the dressing room where there was a white board with names written on it like “Violet” and “Luscious.” Manny looked at me, a sharpie in his hand.

He exhaled a great, impatient sigh. “I don’t haveall day, princess,” he said.

“Camille?” I blurted out. After Bianca’s Karmann Ghia and Camille Paglia. I immediately regretted it. Camille sounded like lavender-scented baby wipes or tampons. I wanted my name to be “Blue” or “Roxanne” or something ballsy and artsy but it was too late. For now, I was stuck with “Camille.” Maybe that name would psychically transport my girlfriend into the musty New Century theater so I wouldn’t have to be there alone.

Manny walked down the creaky stairs and back to his perch behind the front counter. I sat at the dressing room mirror with busty girls who were applying face powder with expertise under dark yellow lighting. I felt shabby and greasy. I was jonesing for more speed, too. I didn’t match up, not in comparison to the women around me. They paid top dollar for their costumes. This was a joke,right? We weren’t supposed to dress like the girls in Penthouse. We were playing with artifice and identity, no? We were revolutionaries fucking with the artifice of representation and having a face-off with the phallic transmission system. The artifice was on our side, right? I crumpled in the mirror, afraid of my image. My pupils were dime-sized, eclipsing the blue. Dark brown shadows collected underneath my eyes. I hadn’t slept in threedays.The sound of hyper rats scraping along the ceiling kept distracting me as custard-skinned girls glued on eyelashes and curled their hair with necks like tipsy swans.

I secured the wig with bobby pins  and walked downstairs from the dressing room into the audience to watch and learn. I was paranoid. My skin was cold and jittery and I heard girls whispering. I stood around, maybe for an hour. I was a failure—way too flat-chested for this job. The women around me were soft and languid and knew the lingo. I was brittle and stiff. A blonde girl in white smacked her gum right beside me.

“Ask them if they wanna play with the kitty,” she said and blew a bubble, staring straight ahead. She had pink barrettes and white kneesocks. Her name was Madeline and she kept ordering pizzas from the pay phone, but the pizzas never showed up. Her nappy dealer boyfriend did. He sat in the audience waiting for her with his arms folded across his chest. She sat next to him for a long time. I counted five songs that she stared into space. They didn’t look at each other. Then he split. When I saw her later in the dressing room, her skin was gray and dead.

Onstage, a woman danced with long red braids and a tiny waist. She was at least six feet five in heels.

“I don’t know if I can do this. I’m in love with my girlfriend,” I said to Madeline. She bumped against my hip with hers and laughed. “Don’t make a fuss, just get on the bus.” She giggled and drifted away like a phantom Barbie.

I did more meth.

It didn’t take long. The touch of strange hands crawled across my thighs,ass,and breasts, and my first instinct was to swat them away. Soon, revulsion became compliance and compliance turned into assertive hustler. I enjoyed the power I had to turn men on with a gesture, a look, a phrase. I kept my feelings at bay in order to do my job.

It’s not that I made killer money right away. I rarely left New Century with over two hundred bucks, but it was enough to keep my speed habit fed and wine bottles around the apartment, at least for a while. I could walk into New Century whenever and leave whenever, as long as I did my stage shows and paid the stage fees. I could wear black lacy kinder whore costumes.This other thing I became, “Camille,” was not a stretch.

Stripping was another rush I came to need. Not that I had other skills. I drifted from lap to lap and collected cash from men who became devoted customers. I watched and learned from girls like Danielle Willis. She was skinny and pale and long from her nose to her fingernails. Sharp knife hipbones jutting out of her expensive Victoria Secret lace bra and panty sets. She floated across the room in buckle boots, a fishnet shirt and not much else; she danced to Siouxsie; whispered things to the men, and to me, while bent in half. She ensnared them; she secured regulars. I learned by watching her.

She was just so fucking sexy.

Camille was this other thing, who smiled when she was sad, and grinned even bigger when she was angry, and laughed when she was rejected. As Camille, I tried to maintain my militant feminist ideals within the context of lap dancing. I tried to feel empowered while swatting men’s fingers away and I always came home with cash to Bianca. But often what I really felt was mangled, by the way the system rewarded me financially for disregarding my boundaries. I broke my own rules, crossed my own lines of conduct. Survival took over in the cavernous frenzy of the clubs as wallets opened and closed. I told myself men weren’t invited into my life or my skin, and then began to have orgasms during lapdances—which did feel like power, for two minutes.

I allowed myself to get off so I could focus on work. I’d find a man who wanted me and gyrate on him like a piece of furniture until I came. I never shared my orgasm with them. It was only for me. I felt distraught that I’d morphed into a caricature, ignited by men’s desire for me. I became that thing for that cash and the line that once separated the dancer from the girl reduced to a fine spray as the system had its way.

Antonia Crane ‘s new book, Spent, is available on amazon.com. The books chronicles in part chronicles her experiences stripping in San Francisco, where she “hoped to take down the Patriarchy one lap dance at a time.” Please be sure to check out her website at antoniacrane.com! 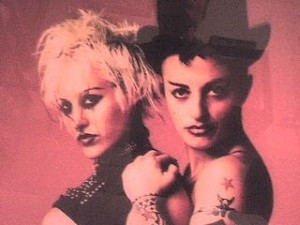