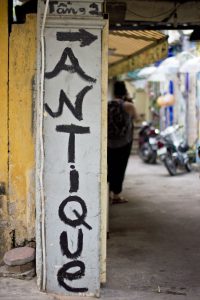 Before it all, he was here.

“Hey man,” he calls to the couple walking by.  “Help an old hippie out.”

This man he watches, this man who spares no change, the twin reflection of two lives diverged.  There goes marriage, property, prosperity, he reckons.  A boomer coming of age.  Buying real estate to house his dust.  Home the shell you cannot fill.  So what then?  Partner up to ease the loneliness?  Waste the day planning for that which shall pass as well?  Pitfalls of a generation that swore they’d do things differently.  Young men getting older.  The father’s prophecy delivered unto the son.

But not me, he thinks and watches.  Not me.

For him, home is nothing but a place to lay his head, a space to occupy as he watches the passersby.  No partner, excepting memory.  No career in this here fleeting life.

Summer lodging at the villa, the park bench.  Dedicated in Loving Memory to Muriel Lovitz.  Further back, privet hedges guard his inner sanctum, four walls of hanging plastic roofed by cardboard shingles.  On those freezing nights of winter, on those nights the wind did howl, this den was where he made his bed.  Newspaper comforter.  Mattress of soggy leaves.  Pillow, a ragged polar bear, the white stuffing pouring out.

Ten years pass.  Ten years of stable squalor, yet his spinner changes to fit the times.  Read my lips-I need beer.  The sign gains more chuckles than quarters, yuppie scum too busy hurrying on to somewhere else, ever scurrying for their share of the go-go eighties.  Greedy little Geckos.

Days slip by like leaves falling in the park, slowly at first, heaping into mounds that children play in.  So beautiful as they swirl in the wind.  So pure before rotting into winter.  Yet as always, spring returns again.  Old leaves, like days past, are swept away to make tidings for the new.

Time passes him as well.  Time, like pedestrians, like bench sitters, like his fellow vagrant bums.  Time finds some getting sober.  Time finds others cashing in.  He alone endures so long.  He alone is witness.

And then, a moment.  On a crystal blue September morn, two planes crash into towers stretching high into the sky.  Ash covered survivors run and huddle in his park.  Red Cross gives him food as if he’d been there too.

The meal is welcome comfort, but all these visitors, these victims of man, they slow his panhandling ways.  Distasteful to prosper off such times.  Retreat, and wait for peace to come.

Fast forward again.  Society’s advancement accelerates the pace of life, but as spectator, he sees beneath the sleek veneer.  Technology links these buzzing bees, yet company men talk less and less.  Not in general, not with precious deals to be made, but to their fellow man.  Digital corrals preventing them from chatting about the weather.  Computer filters keeping them from speaking face to face.  Bluetooth earpieces make magnates take on the appearance of maniacal streetwalkers, babbling on to god know who.

To fit the needs of this new generation, his spinner reads like sci-fi prophecies of yesteryear.  www.FeedThisBum.com.  The era of technology has found even him.

Summer passes into autumn.  Autumn that brings another crash.  This one, an avalanche of houses propped up by mounds of debt.

Occupy.  Occupy.  Occupy it all.  Chants of a generation reborn in discontent.  We are the 99!  Where’s my bailout?  A revolution starts from these.  Signs crafted with message, yet missing true conviction.  Certainly, no plan to see them through.

For him, occupation means neighbors who have never spent time outdoors.  Those washed and pampered interlopers.  Those who lack the smell of time.  Yes, they take him in as their own, pointing him out as proof of an economy gone to seed.  Yet none of these leaf peepers cut their safety line.  None take the plunge past a point of no return.

All, each and every one, save a final quarter so that they can call home.

And home they call indeed.  One at a time.  As pepper spray blinds eyes that cry they’ve been opened.  As police raids sweep them from the park. As winter sets her icy noose.  They depart, just as surely as they came, leaving only placards posted by the law.

No Trespassing.  No Public Vagrancy.  No Outdoor Camping.

And yet, he is allowed to stay.  As always, his plight remains unchanged.

The seasons change as winter wanes in memory.  No longer do those cold winds plague him, yet global warming makes for some delight.  He shears his jeans off at the knee.  His hairy shins brown in the glaring sun.  2034.  So many people have passed before him that now they cycle back like tracks spinning on a record.  From father to son, son to grandson, these faithful see him through.

“Would you like my leftovers?” they ask.  “I hope you don’t mind kale.”

Vile dog food, he thinks and chews, and not because of the kale.  This food tastes of blight, of failing soil, of GMO’s schemed up in labs.  He stomach’s it, wondering how he stays so thin while these residents bloat like corpses.  He digests a changing landscape as migration, demography, diabetes, dwindle down the rest.

So much time passes.  Dawn into dusk, the setting sun a violent flood.  First, they blame the weather.  Then they blame the fools.  Guns silence some.  Disease claims the rest.

Now, the fractured skyline casts shadows, the passing shades of ghosts, upon a vacant clearing.  On a park bench.  On a watcher.  Years have lost meaning in this time without man, yet keeping sentry, he maintains his post.  Moss and lichen weld him to his station, the roots and vines and tendrils that entangle.

Before, and after, he was here.  Before, when birds whistled out his wishes.  When life grew so wild and free.  And then during.  The meteoric rise preceding the great collapse.  From summer into autumn.  From twilight into night.  Life reduced to rubble.  Forced to start again.

Across the park, a fox rustles through the sagebrush.  Scrawny, lean, his red fur stands out against the concrete.  The fox pauses, and looking over, catches the man’s eye.

At his feet, he leaves his tiding.  Meager, this mouse of bones.  Meager, yet left without complaint.

A mossy hand lifts from off the bench.  The offering is claimed. 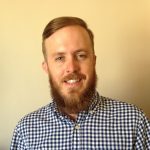