Something To Do With Horses by Randall Brown 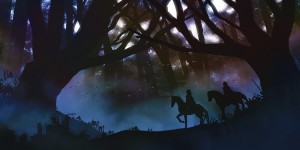 As Stephanie climbed the stairs, she thought only of how white her teeth might shine, like a diamond ring. She wasn’t thinking why a dentist’s office would be housed at the uppermost reaches of a church. Maybe she did, only for an instance, as she paused in her ascent.

Out of breath and thoughts, she arrived at the office. A thin, cheery woman greeted her, explained that because six Stephanies worked in the office, they went by numbers, hers being three. Three made what Stephanie felt sure was a tired joke about having oxygen for patients after that climb. Four walked her back to a chair and a tiny square of a window that looked out onto a dirty cloud.

Masked—”Let me see what we got”—he inserted the mirror and poking-thing. How did dentists learn to do their reversed mirror-moves? And what of tonight, meeting Douglas, her as shiny and new as her profile picture promised. Eyes closed, she still saw the cloud. Like that story about a guy and girl drinking in a bar and her looking at the hills. She waited for the cloud to transform into Douglas’s ranch, all grass, dirt, endless ground.

He explained: two root canals; four veneers; gray teeth (not yellow). All made the whitening process far, far from perfect. And why in the world, given that, would she want him to proceed?

That cloud hung in the window like a tooth. Maybe it had just been one final panic that sent her to this office hours before meeting Douglas, and maybe it didn’t really matter at all. She just wanted the dream—that grounded, real future.

That cloud said to her that things were what they were; but then a face replaced the cloud. A man’s face.

She didn’t so much jump as twitched.

“That man”—and her dentist pointed to the window—”is a steeple-jack. You know, he repairs steeples.” The dentist went back to the sink. “Well, not just steeples. Steeple-like things.” He turned on the water, began his alphabet song.

She rose, knocked, then un-levered the window and pushed it open. “Douglas?” The air took her breath.

“Stephanie?” He bounded over, like a spaceman, or maybe more like a marionette. “I can’t believe—” The wind ripped away the rest of his sentence. The rope that was wrapped around him looked like floss, and he seemed as if he might be uprooted any second.

She looked out, over the edge. There was no sharing this life, just a lifetime of picturing different falls, different splattered patterns like inkblots. He’d told her steeple-jack­—and the rest formed separate from reality, like the Photoshopped profile picture, a virtual boyfriend, like a cloud in the midst of nothingness.

He leaned forward to kiss her; she pushed and the wind took hold. He lifted up like a kite; she grasped the string. He yelled something, either shove or love.  Then, clearly Stephanie! and, like that, the window filled with all seven.

“A steeple-jack,” Stephanie told the others. “I thought it had something to do with  horses.”

“What will you do with him now?” they asked in unison, like a Greek dental chorus, teeth white and straight like the fence she imagined would circle their grounds.

“Stephanie!” he called out. Against that sea of blue, he didn’t look like anything at all, a pixel. “Stephanie!” he yelled again, as if she were the only one.

“You made promises!” the chorus called to her.

“Horses and land,” Stephanie answered. “Not churches and heights. That’s what I was promised.”

“What you imagined!” they said.

All the time, Douglas swung back and forth, a pendulum, oscillating, left, right. Did you know that the name for each completed swing was a period? “Stephanie, Stephanie,” he cried. She wanted a period to this episode, not the questions the other Stephanies kept raising.

They still crowded around her, each one popping up into the frame, chanting about promises, the world as it was. Douglas strained against the connection, and she held out onto the string, the pivot point, the Stephanies pushing her against the window, toward those dizzying heights of steeples, belfries, and Douglas, swinging in air, the Stephanies pushing, pushing, until he finally grasped hold, and together she and Douglas swung, her holding on for dear life.

“Free!” the Stephanies called to her.

She smiled her yellow smile, imagined the moment Douglas had to let go—and down she would fall, still feeling the swing, at the end not knowing what had hit her.

Randall Brown is on the faculty of Rosemont College’s MFA in Creative Writing Program. He has been published widely, both online and in print. He earned his MFA at Vermont College. 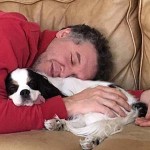