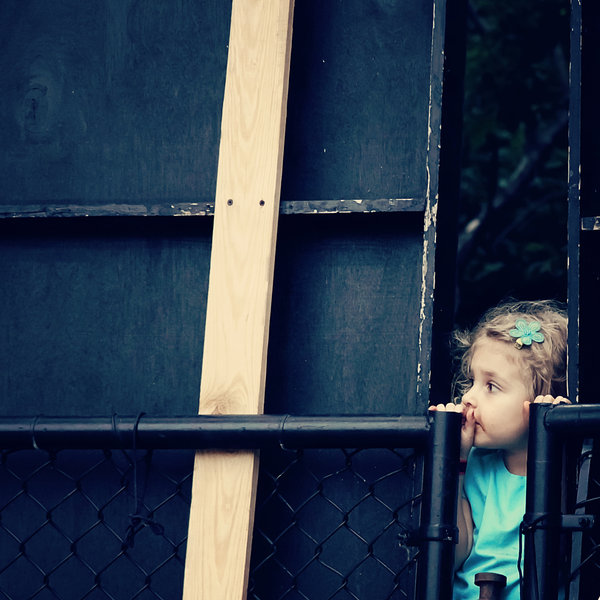 The air this summer has been thick and sticky like the buildings and people have been steadily evaporating. It doesn’t get better when the sun goes down. The city strips down to their underwear and lays by their fans, panting and sweating in the humid dark. Everyone says it’s global warming, that it’s getting hotter ever year. You sit in your car, windows rolled up and the key in your pocket. A bead of sweat slips down your neck and along your spine before soaking into your damp t-shirt. In here, each summer feels equally hot and airless.

When you were a kid this neighborhood was mostly immigrants. Your mother used to buy bolts of fabric cheap from a woman who lived and worked out of a beat-up blue row house on a block of beat-up row houses. The reason you kept agreeing to take the ride and simmer in the back of the station wagon was to catch a glimpse of the woman’s daughter. Sweat would prickle along your collar and down your spine while you waited, fantasizing. She had these giant eyes, thick dark hair, and milky skin that would have to feel smooth beneath your hands. She’d stand in her second story window and smile at you before she closed the curtains. You’d drop anything or anyone to ride down and watch. It was worth missing the parties and games. Your friends would call you a pussy as you climbed into the back of your mother’s station wagon to take the drive. They didn’t get it, this was the rest of your life you were waiting on. As the summers went on they found a new goalie or catcher, a new kid to pass a badly rolled joint to. They replaced you with someone who was there. You didn’t blame them. Even though you never learned her name, she was your Juliet. It was worth it.

Each time, sitting in the back of the car you’d imagine that would be the time she would tap, tap, tap on her window and beckon you inside. You waited for it. Stray cats wove through garbage cans. Kids on the block kicked a dingy ball down the cracked pavement. Two old men sat barefoot on lawn chairs that must have been white a decade ago, smoking. The kittens of the kittens of the original cats poked through, unearthing fast food wrappers and lamb bones. The kids, now older, with sparse facial hair, rode by; eight teenagers on five bikes, on the look out for three more. One man died, the other sat smoking twice as much, catching up. Summer after summer, you wished for it. You fantasized about her, what her voice sounded like, what her breasts tasted like. She never beckoned. She never descended from that room. Not all wishes get answered.

You haven’t been back here since you were eighteen. Fifteen years as a window washer took the beautiful girl in the ragged row house off your mind somewhat. Every morning you’d dangle off the side of some twenty-story building, sweating, soaping, squeegeeing. Sometimes, some office worker would look up from their paperwork and computer as your body eclipsed the sun, but generally, no one would notice you. People chopped vegetables, had meetings, showered, fucked, slept as you floated past. They wedged phones between their cheeks and shoulders, using their hands to put on one pump than the other. They roamed from living room to kitchen in nothing but a gauzy robe. It became an obsession. Instead of being alone in your shitty low rent apartment, you were there, so close to the life you could have the life you might have. You prayed anyone would see you, acknowledge you, tap on their window for you. Not all prayers get answered though.

You became thorough, making sure that no flecks of dirt or grime were left on the windows, that they were streak-free and glistening. You’d take your time, spend hours on making sure each window sparkled. No one else appreciated the time you spent in the searing sun and the gale force winds. They fired you for someone quicker, someone more focused. Now you have nothing, but time you guess. Your apartment is hollow and your phone never rings. During the day, you sprawl on your couch and wait for the future to come. At night, you trudge down to the bar to watch other people get drunk and be lonely like you. You stay through the pub-crawlers and the social drinkers, the other bar tenders and the cops working night shifts. You dissolve into the booth in the back. The sun starts to haul itself onto the horizon and the bar tender sweeps you out like dust. You sleep into the afternoon and through the heat. Weeks melt past. Whatever future you were waiting for feels no closer than it was before.

This afternoon you wake up to your air conditioner sputtering. It starts blowing lukewarm air. Sweat prickles on your skin and for a minute, the back of your mother’s station wagon comes back to you—the heat of air pressed against your skin and the thrill of watching, the feeling that it has to happen eventually. You pick up your keys. Some things are just a matter of waiting.

Now twenty-somethings saturate the neighborhood like mold, spreading from building to building, climbing up the walls, getting in the crevices. Their driveways are littered with shiny retro-style bikes and empty boxed wine containers. There are fewer cats. There are no lawn chairs, no barefoot old men with withered hands and yellowing fingers. There’s no fabric in the trunk. But it’s just as hot as it ever was in the back of your mother’s station wagon. The blue row house is still beat up, even across the street in the dark. There are still the same goose bumps along your back as you peer through the glass and into someone else’s life.

After four hours of watching, a figure walks past the window that used to be Juliet’s; a taut girl with a blonde bob and tan skin. She’s no Juliet, but everyone’s beautiful through the glare of a layer of glass. She’s brushing her teeth, pacing past her window in a bra and boxer shorts. A bra strap slips off the shoulder, revealing a swatch of skin and the rush comes back—the desire, the heat under your skin. You lean in so you can get a better view of her window, of her. She saunters past again, and for a second, the world is a hundred thousand times smaller and it’s just you, her, the heat in the air, the heat in the pit of your stomach, and the glass between you. They say the summers are getting hotter but you can’t tell, you always feel on the verge of boiling.

She when she’s pacing, gargling mouthwash, she backpedals and peers at the street. It’s a quiet neighborhood. Yours is the only car for twenty yards. The lights flick off, the room plunged into darkness. You swear you can see her silhouette in the window, watching you, waiting. You hope she smiles but there’s no way to tell from here. The curtains rustle and slide closed. You put the key in the ignition. Eventually your prayer for a tap, tap, tap has to get answered. Until then, you simmer.

Melissa Bean is a spicy food lover currently living in New York City. Her work has or will appear in ‘Eunoia Review’, ‘The Rusty Nail, ‘Apocrypha and Abstractions’, and ‘Scissors and Spackle’. Like all other organic life forms, she has a shoddily maintained blog: www.melissabeanwriting.com