Seven Stars Around the Moon
by Bud Smith 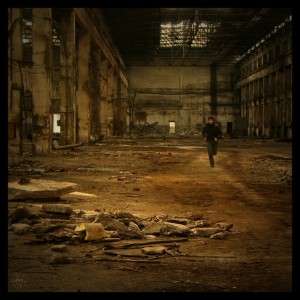 Sarah was in her usual seat at Jade Temple Garden—a pink satin-lined booth across from the eel tank. She drummed her fingers hypnotically on the table, her wedding ring clacking, making the only noise in the restaurant. She didn’t notice the ring anymore. Frank was gone, everything reminded her of him, except the ring

The tank was full of black eels slipping in and out of neon red kelp and fluorescent green sea lettuce. The eels were in constant motion, moving, darting—never stopping.

Nightly they appeared in her nightmares.

The waitress, Mei, came—demur, the speed and control of a hummingbird. Automatically, she brought steaming gunpowder tea, bone chopsticks, an oversized menu with a foo dog made of glistening gold foil.

Sarah remembered when there used to be two sets of menus, two sets of chopsticks, two miniature cups of gunpowder tea.  Anymore, she couldn’t decipher if she came out of habit, or for the discomfort that the eels brought her. Otherwise, she felt nothing.

“Will it be your usual?”

Sarah ignored the question, pretending to look at the Foo dog menu.

Mei’s family owned the restaurant, and were also importer’s of Asian goods, distributed from their own factories and warehouses buried in the industrial slums of the city.

Sarah remembered when Mei used to be very friendly with her and Frank, even once confessing that it wasn’t her desire to be a waitress at her father’s restaurant.

“What do you want to do?” Sarah had asked.

“I’d like to paint. I’d like to be an artist,” Mei spoke low, as if overheard, the consequences would be severe.

Sarah lowered the menu, studying Mei’s eyes, finding no light. All that remained from their hopeful youths was the Tuesday night routine, the taking of orders, the slurping of soup, the bamboo placemat.

The black eels slithered through the salt and the neon vegetation, void of joy

They seldom  spoke about anything other than the specials, but Sarah changed that by asking, “How are you?”

Sarah moved her chopsticks around nervously.

Mei didn’t know where to look, finally she said, “You’re alone? No date? Pretty girl like you should never have to dine alone.”

She ordered her usual, the Seven Stars Around the Moon, wonton soup, another cup of green tea. Those crunchy noodles.

She tried to eat, but couldn’t. She never cared for seafood. She ordered it because he used to order it.

With the check Mei brought a fortune cookie. She whispered, “I need to talk to you sometime soon. Away from here.” The doors opened, one of Mei’s brothers walked from the kitchen, wearing a dark well-tailored suit. Mei pulled away quickly, loudly saying, “So nice seeing you Mrs.”

As Sarah left, she slid the fortune cookie into her purse.

Through the plate glass window, she felt the eyes of the dark-suited brother. She also felt the movement of the eels.

Back at her apartment, tears came. Jade Temple Garden had been Frank’s favorite place. They went there every Tuesday night. When his book of poetry came out, Frank even joked about having a reading there. The owner claimed to be a fan of Frank’s, even buying a few copies of the book, claiming, “You’re quite a poet! You could write fortunes!”

Sarah decided she’d destroy all the final traces of him, clothes remaining in the dresser drawers, pictures on the shelves. Four years of hope was enough.

She started with her purse. The wallet photos. She dumped everything on the floor. Lipstick and keys and  her cellphone.

Surrendering, Sarah unwrapped it, discarding the cookie on the rug, looking at the little slip of paper inside.

“Help, I’m be held captive at the fortune cookie factory—Frank”

She froze. The doorbell rang.

“I know where Frank is. We’ll take my car. I’ll explain on the way.”

They drove through heavy rain. On the outskirts of town, the factories and warehouses appeared, looming sinister. Blooms of smoke pushing up from exhaust stacks.

Mei killed the headlights, “This is my father’s factory,” she said. “Frank is inside.”

They moved quickly through the rain to the concrete stairs at the back of the warehouse. They went through a set of doors that required a combination entered on a keypad.

Inside a dull halogen light flickered overhead. On either side of the long hallway were grey metal doors with small chicken wire glass windows. Mei led Sarah to the end of the hallway. The last door.

Sarah stood on her tippy-toes, peeking inside.

There was a man at a typewriter, tapping out messages on small pieces of white paper carefully slipped into the typewriter. Sarah gasped, “It’s Frank.”

The door was locked. Sarah knocked on the window furiously, pulling uselessly on the locked handle. Frank stood from his metal chair. The piles of small fortunes scattered everywhere. He sprinted to the window, peering out with wild disbelief, frantically trying to get to her.

She stuck it in the lock. The door flung open, Frank shoved Mei with all of his force. She hit the wall behind, knocking all her air out. She collapsed to the floor. Frank grabbed Sarah’s shirt sleeve, together they bolted down the long hallway out into the torrential rain.

“Where are we going?”

“AWAY FROM HERE!” Frank screamed.

Headlights appeared. A car came down the block. They froze, but the car kept going passed them.

“We have to leave, right now, however we can.”

There were no keys in the ignition. Frank ran back inside and snatched Mei’s purse, just as she was gaining her bearings. There was a flash of lightning. Sarah heard other voices. Men shouting. The door opened, Frank sprinted out, clutching the car keys, tossing the purse into a puddle.

They jumped into the car, peeling off.

Her brothers in their tailored suits appeared from another door. A hand went over her mouth, she was pulled back into the darkness of the warehouse. Sarah and Frank just kept driving.

Life was strange and new again, reunited like that. A second chance.

They laid in a motel bed, holding each other, Sarah said, “I thought I’d lost you.”

Time went by. They moved relentlessly, taking small odd jobs. Something sinister possibly pursuing them. They slept with great worry.

Frank studied his face in the mirror. His hair was grey, most of it gone.

“I barely recognize myself,” he said.

“I dreamt of you almost every night.”

“You were swimming mostly.”

He said, “Now you’ll just have to dream of good things.”

As time went by, their dread lessened. They slowed their movements. The towns became more comfortable. It didn’t feel like they were running any longer.

They settled into an apartment near the ocean.

“It is.” She opened the brown paper bag, set the food on the table. The typical white paper containers. No chopsticks. Plastic forks.

She split one open, it said: “Let the world be filled with tranquility and goodwill.”

Sarah showed him, “That your handiwork?”

Afterwards, Sarah dug back into the bag, taking out the calendar.

It was a painting, of a woman in a red dress with a golden foo dog pattern. The face was unmistakably Sarah.

“Mei.” She was there now, locked-up, painting calendars behind a grey metal door.

“We have to go back for her,” Frank said.

Bud Smith grew up in New Jersey, and currently lives in Washington Heights, NYC with a metric ton of vinyl records that he bought at Englishtown flea market for a dollar. He is the author of the short story collection Or Something Like That (2012), and Lightning Box (Kleft Jaw Press, 2013); he hosts the interview program The Unknown Show; edits at Jmww and Red Fez; works heavy construction in power plants and refineries. Currently, he’s probably watching My Cousin Vinny. 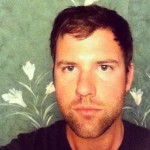