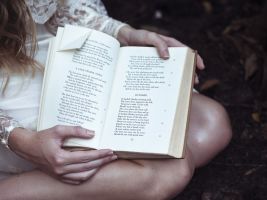 He wasn’t assigned to write the story, “missing child” but he wanted to. So he stole it. Scribbled the words down in the corner of his notes after glancing over the shoulder of Chad, an overweight but pleasant middle-aged man with a boy’s name, who sat just in front and to the left of him. Chad had held his card up, forgetting to “guard these words” as the workshop leader had instructed. Careless, as if his name decided this for him. He didn’t care they would end up turning in the same story. At least, not enough. He liked the way it sounded and whispered the words twice, the razor of the s’s on his tongue as they pressed to the backs of his teeth, the roof of his mouth. He had just read yesterday about a young girl who had gone missing. Or maybe she was older, a college aged woman. He wasn’t sure that mattered. What mattered was she was found because she had joined her own search party, had wandered from the thickness of the forest, moved by the account the volunteer had shared with her when she asked what they were looking for, how this missing girl’s family was grieving. And she thought about her own family then. Wondered if they would miss her enough to launch a search party that stretched the width of an entire forest and the plains just beyond that too. A search party that included total strangers because something in the family’s grief was so big it resided in us all. She too was moved and that is why she joined the search. She knew what it was like to feel lost. It’s why she had wandered into the wild. To find herself. Later grateful to realize when she learned the party was for her and she was literally looking for herself, which eclipsed the epiphany she thought she had had just moments before she wandered out into the clearing.

He wanted to go missing sometimes. Wander out of this life he had grown tired of not because his life was boring. He never felt like he knew how to feel any other way.

The girl to his right, Tiffany, whom he decided he didn’t like though they had never spoken because she would refuse to eat anything at meal time if she couldn’t trace it to the source, had turned to glare, lowering her eyes to the corner of his notes then back up to meet his. She turned around when he made no sign that he felt any shame for stealing the words, her face flush, shoulders slumping toward her topic. She still guarded it beneath her cupped hand, though less adamantly, a jaunty “ing” of some present progressive verb now free just beyond the tips of her fingers, as if she knew then he didn’t care enough to guess what the remaining letters might be.

Which he didn’t, already imagining the story he’d write, and the way the young child would be dismembered while still alive. A little flesh here, a little flesh there. But never enough that the child would bleed out. How the man, the quiet neighbor in pastel cardigans from the next street over, would leave the flesh in front of the child, so he could watch the mounting pile of his body forming before him on the basement floor. It would be in second person.

Ralph Pennel is the author of A World Less Perfect for Dying In, published in 2015, by Cervena Barva Press. Ralph’s writing has appeared or is forthcoming in Literary Orphans, F(r)iction, Tarpaulin Sky, The Cape Rock, Ropes, Apercus Quarterly, Monologues From the Road, Right Hand Pointing, Rain Taxi Review of Books and various other journals. He teaches poetry at Bentley University and literature at Bunker Hill Community College. Ralph has served as the WLP Dean’s Prize judge, for Emerson College, and the Firman Houghton Award judge for the New England Poetry Club. His work has been nominated for a Pushcart, and he was a finalist for Somerville Poet Laureate in 2014. 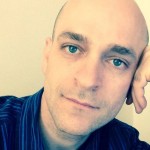