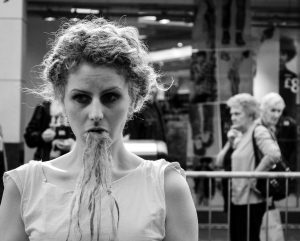 The night begins as a search and rescue but quickly gives way to a scientific experiment. Maia wants to warn the woman seated at the table in the center of the café that she’s dining with a monster. His fangs are softened with an intimate smile. His maniacal brain camouflaged by charming eyes reflecting candlelight. He is primordial. Dangerous. When he speaks he exhales all the ill intentions that lie beneath the surface of polite conversation, but Maia sits frozen at her table, hidden behind a menu propped up like a children’s tent. She fancies screaming or throwing her knife so that the serrated edge pierces his smooth forehead. But her imagination is braver than she is.

Six months ago, she sat with him at that exact spot, blinded by this costume. Now Maia remains on the outskirts, perched by the door in case he turns and senses her there. Maia must stay out of reach. She watches with the sick fascination of wanting to see how it’s done. How a woman wanders into his trap without noticing the menacingly muscular fingers and the way he listens too hungrily, nodding and decoding the young woman’s stories into a clear map of how to draw her in. He is oleander, lovely and deadly.

The dinner moves, and his prey slowly allows him to take her hands and whisper into the curve of her neck, Maia feels the ground beneath her shiver. He will brush his lips against the woman’s cheek and graze her earlobe with his teeth. Playfully. She will soften. The two will skip dessert because his car is poised to take them to his apartment. When he raises his arm for the bill, it’s not a flag of surrender but instead the start of a dangerous race. As the arm drops Maia realizes she has moments to warn the woman that he will become persistent. Violent. Everything from the restaurant will turn upside-down and, in his home, he will fall on her like boiling waves. She will fight and then try to submit but it will never be enough. Not until he’s left her fragmented and civilly asked her to gather her things and get in the cab. Remember, he will tell her, he now knows where she lives and that when she was eight she broke her mother’s perfume and that she followed him home of her own free will. Bruises will fade, he tells her, and my interest in you will go away.

The newly minted couple stands at the café door, and Maia is torn apart because fear has paralyzed her. She is no hero and can stay hidden, forgetting the night and forgetting him because he’s moved on to the next woman. She closes her eyes so tightly that she sees the spider veins and grips the edges of the table, summoning a mythic burst of energy that no one has anymore. Maia lunges at them and grabs his hand as hungrily as he grabbed her throat six months ago.

“Hello!” she almost screams, and the young woman is shocked back because Maia’s hair is wild and blouse half unbuttoned and untucked. The prey shakes her head and leaves while Maia seemingly sacrifices herself to the beast who grins with amusement. He nods and gestures for her to leave with him, and to her surprise, her feet move effortlessly as they make their way to his car. And as she slides in she realizes she never let go of the knife from table.

And she smiles faintly because he’s not the monster in the car. She is.

Sarah Clayville‘s work has appeared both in print and online in The Threepenny Review, Mothers Always Write, Bella Grace, and other journals. She is an assistant editor for both MAW and Identity Theory, and teaches high school English in central Pennsylvania. Her publications and musings can be found at SarahSaysWrite.com. 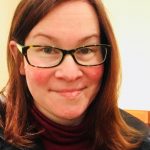