I Don’t Want to Hear Your Story
by Robin Bullard 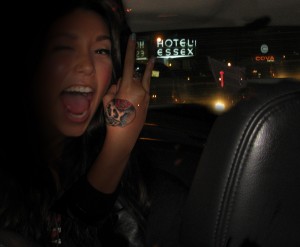 “Eighteen seventy-eight Market Street?” I asked him, just to make sure I’d heard it right.

Cutie-pie, white, toasted cutie. Maybe twenty-five. She had a pale, perfectly formed little face that reminded me of a mink. In hindsight, make it a weasel. Black hair. Tats along her arms. A wraparound thing covered her top half. More or less. A fluffy black miniskirt and complicated stockings below. I’d taken it all in as she stumbled into the cab with—

A guy, wearing a wool beanie despite the warmish weather. Shirttail out, half-assed beard. A super-cool bike messenger bag slung around his neck. The same age as her, about, but compared to her, he looked like a kid.

“It’s the address I said be-fore,” she slurred, grabbing a cell phone from his hand. “Can’t you fucking show me?”

I started driving while they figured it out. I wasn’t going to make money standing still.

But in the tilted rear-view, she was pushing the cell phone at his face like she wanted to wipe his nose with it.

“Just go through your texts,” he said, his lips tinted by bluish light, fending away her hand.

The boy took the phone from her hand. “Okay,” he said. “But you do have your money though, right?”

She flopped back and grabbed his arm. “Do you have a cigarette?”

“Listen, driver man,” she said. “My fucking elbows are bleeding,” although I hadn’t asked about her elbows. “They’re bleeding and broken!”

“Really?” I said. But I guess she didn’t care to elaborate.

Instead, she slapped at the phone in her boyfriend’s hand. “Go to it and show it!” she demanded.

He pushed the phone toward her.

“Don’t hand it to me! Just show me. God. I’m going to lose my mind, bro!” She screamed at the top of her weaselly voice.

We rolled on. She’d stalled out momentarily, but I was pretty sure I was traveling with a bomb.

Market Street. Tartlet Street. Gauntlet Street. Hot skillet Street. The street on an angle that’s got no angle. Sketchy-looking shufflers in black hoodies. Scraggly trees, clip joints, strip joints, crappy-looking signs. All I wanted was to get someplace, just wanted to get rid of an irritant to the brain, just wanted to get on with my mundane life while the unseen hand ratcheted up nerve fibers in my neck, while I begged for just one green light. The streetcar in the center lane trundled along about as fast as you can walk, while the sad-sack drivers who drove on the right had a weird agreement among themselves to drive at the exact same speed as the streetcar. The human race is cows. One after another, nose to butt, content to shuffle along to pasture, to the barn or to the freaking slaughter—

“Eighteen something, sir,” she suddenly blurted. “Between Laguna and whatever.”

“I think it’s ridiculous, by the way, that we can’t smoke in your fucking cab!” she screamed at the back of my head.

“You need to chill out,” the boy said.

I pounced on this.

“Don’t fuck with cab drivers,” the boy said to her.

“Do you want to get out?” I was suddenly so enthusiastic.

I laughed. “I have no interest in hearing your life story!” I said, which was a phrase I’d never, ever said to anyone before.

“Exactly! You don’t give a fuck about my life story.”

I looked over my shoulder. I had been, so far, the driver of this tin toy taxi, attached to the vehicle, the hollowed-out control module fused to the seat, but now I was coming undone, my metal neck twisting, the flesh-colored shellac cracking as I rotated toward her. “I don’t want to hear your life story because you’re a disgusting piece of shit!”

Facing back, I was pointing my eye balls at her sharp-toothed little face even while the car rolled forward. “Do you want to get out now or not?”

I turned back to the wheel and tried to snap it off.

“Then stop being so fucking rude!”

“You’re my favorite cab driver ever,” the boy said.

I was driving a car, holding on to the wheel to save my life. I felt utterly adrift.

“We’re almost there, don’t worry about it,” the boy said.

And then, miracle of miracles, she found it on her phone. “Eighteen seventy-eight Market Street, señior!”

“Well, thank you very much.”

Nobody said anything for two seconds.

“I appreciate your help,” she said. “I’m sure you’ve dealt with a lot worse than me.”

“Well, I’m sure you will. And you’ll have to do it because you’re just a fucking cab driver—”

“There it is right there!” I said, shaking my finger at the dirty four-story blue apartment building with the beat-up security gate at the corner of Market and Laguna. “Eighteen seventy-eight. You see that?”

“Thanks,” she said in a tone like she’d just taken a big whiff of sewer. “I appreciate it. I’m a brat.” She looked at the boy. “This guy doesn’t even know me, bro! I go to USC and the Academy of Art. He doesn’t know me! I have enough money to pay him extra, if I wanted to—what the fuck’s this!?”

“Fuck!” She kicked the back of my seat three times in quick succession.

Then there were three beats of silence.

“What you have to do,” she said almost sweetly, “is take us here and take us home.… So if you could wait outside that’d be really extra cool.”

“If you want your money, you’re going to have to wait,” she said as she flung the left door open in traffic. Somebody honked as she stumbled around the back of the cab and reappeared by her boyfriend’s door. He’d opened it, but he’d paused to tell me something.

“Who you talking to?” she yelled at him.

He made a pained face. Getting his dick wet tonight didn’t seem like such a gigantic deal now maybe.

“Go investigate!” he yelled to her, gesturing at the building.

He pulled the door shut on her. I could see the sad little emoticon of her face through the window as she waved her arms. Spinning around to look at the building and then turning back again to face the cab like some sort of pirouetting demented ballerina while I couldn’t stop myself from checking out the two or three inches of lush white thigh that showed between the tops of her complicated stockings and her fluffy little skirt.

But before he could answer, she jerked the door open from outside, so that it creaked like it was going to come off. If there was any damage to her elbows it didn’t seem to have affected her colossal strength.

“Where the hell’s seventeen eighty-seven?” she wailed. “I don’t know where the fuck I’m going, dude! I’ve never been here, dude!”

“He doesn’t want to wait? Is that it?” She was utterly unstoppable. “Does he want to go?”

“I am annoying!” she screamed.

I looked directly at her. “I honestly don’t know how he puts up with you.”

“I honestly don’t know how you can be a fucking cab driver!”

“You should thank him,” I yelled, pointing at the guy who was still sitting there between us.

“Fuck your mom!” she shrieked.

“Being around you is torture.”

“Good night!” I said turning back to the wheel.

“Please take her away,” I said to him.

The boy with the beanie turned back to me. “I’m really sorry,” he said. Then he stepped out of the cab.

“Hey, asshole!” I heard, as the door slammed shut.

I pushed the gas and made a quick right. Immediately a guy, a greasy-looking guy with a ratty mustache and a long coat stepped out of the darkness holding up his long red hand. He got in.

Robin Bullard is a short story writer, a taxi driver, an advertising art director in reverse order of profitability. He’s a regular at the San Francisco Writer’s Workshop and has read publicly at SF LitQuake and Quiet Lightning. Eight of Robin Bullard’s taxi stories are available in an e-book entitled, “I Came by Cab,” on Amazon. 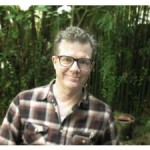