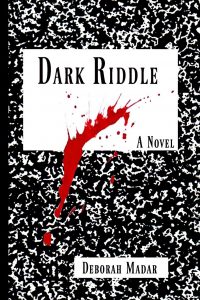 Adam Stoller, a character in Deborah Madar’s new book called Dark Riddle ponders the idea, “What is writing if not the search for truth.” I’d go further and ask whose truth do we choose to hear. Blogs, self-publishing, the comment sections of articles all allow multiple voices to be heard. It’s easy to find a Greek chorus to tell us what we want to believe. It’s not difficult to come across a feel good story, but life is not a Facebook meme and sometimes there is no sense to be made from other people’s actions or the choices they make.

We’re told early on in the book that there is some mental illness in Gina Clayton’s family. Was there a biological reason for her son’s actions? I’d venture she would gladly cut off her ear, or her hair, or limb for that matter if she could just stop for one minute, any minute before 11/23, but as a working mother she doesn’t have the luxury. In the small town where she and her children live, Gina is given little comfort either before or after the infamous day. A point could be made that the character did have love and support from her parents and if she had accepted it earlier, maybe things would have been all right. As a reader, I didn’t fully understand her unwillingness, but as a fan of Gilmore Girls, I was willing to go along with the idea that the price to her pride would have been too much for her to bear.

The thing is, if I didn’t understand it, I doubt her children did either. Gina had been an only child who didn’t have competition for her parent’s attention or resources. Her children knew this and may have seen a strong woman wanting to prove herself, but at what cost? Gina’s eldest daughter is now pregnant and Gina is allowing her to stay. While I was reading, I had the impression Gina was giving her daughter the same disappointed look her parents gave her when she married the wrong guy. I wondered how that played out in Gina’s son’s head. Did that have an impact, too? We’ll never know. No note was left behind, but there was a story.

Enter Adam Stoller. He’s a successful author who has his own questions about the school shooting. He struggles to understand how a story he wrote inspired an unbelievable tragedy and seems unable to write again until he has figured it out. Arriving at the small community, most people clam up in the presence of the self-appointed swaggering bullies who believe their opinion is the only one that matters. So much of their thoughts are on the school merger which they didn’t want, and it becomes an easy target for them to blame. If only the two towns had remained separate, this never would have happened, they believe. Madar captures the reality I’ve witnesses in multiple community forums – how small minds have the simplest concrete thoughts and yell the loudest.

But in this novel, the quiet voices reach out, wanting to be heard. Finding them is made tricky, but they are key in developing a better understanding of the dynamics of the community and the preceding events leading up to that fateful day.

None of the events or life circumstances tells a reader why the boy did it and in that sense, the book is brilliantly on point. We can all sit back and think about how it could have gone down differently. We can come up with silly sayings like “Be Best” to combat bullying which doesn’t carry any more weight than the “Just Say No” program did to prevent people from taking drugs. We can scream about getting kids away from screens, but I grew up playing in the fresh air before cell phones were as prolific as they are today and I still met up with mean girls. Listening is what we all need to do better, yes, to the kids, but also to each other.

For me, reading a book about the parent of a school shooter offered me a chance to analyze a situation I’d never considered thinking about before. We can never know how it really is for another person, but we need to take baby steps once in a while and try to see things from another perspective. Instead of reading the same old narrative, we need to cruise a different lane in the library, check out a biography about people we don’t agree with or read a romance and a western in order to find out what else is being written, find out what other tales are being told. Deborah Madar’s Dark Riddle is a thought provoking place to start. Available 1 May 2020 from NFB Publishing.

T. L. Sherwood is the Fiction Editor for Literary Orphans.