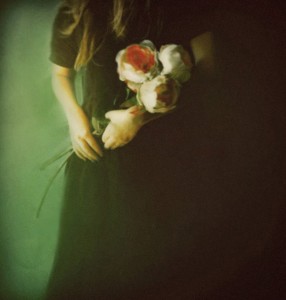 The man sets his beer down at the exact center of his napkin and slowly turns it in circles. His fingers leave clear ovals in the foggy moisture on the outside of the glass.

Around and around, the beer goes. The man looks up, his gaze passes over the assortment of signs and posters and autographed photos behind the bar, the array of bottles, the carefully stacked glasses. The room smells like a million years of stale beer soaked into the wooden floor.

In back, somebody heaves a tray full of dishes into the steel sink with a crash.

The man hooks the heels of his shoes onto the bottom rung of his barstool and straightens his back. He raises his arms, moves his neck back and forth, and then returns to his previous crouched position to study his beer.

His wife is late.

“Gawww, that’s nuthin’ man, you shoulda seen how many times they zapped me! Seriously I thought they was gonna fry my nipples right off,” booms a voice in the corner by the front window.

“Don, if I have to hear about that damn defibrillator one more time, I tell you I’m gonna kill you all over again,” comes another voice.

“Oh sure, then, why don’t you just regale us with the sad tale of your feeding tube some more?” comes the retort.

“Here’s to the medical profession,” says someone, “they try their best, but sometimes it just ain’t gonna happen.”

The men laugh, a mixture of salutes and toasting gestures ensues.

The front door of the bar shoves open with a tinkle of tiny bells and a scraping sound as it retraces the permanent arc in the floorboards.

“Damn! That was some kind of weird,” exclaims the person in the doorway.

It’s a woman of about fifty, wearing a trench coat and galoshes. She stomps over to the bar, dripping water on the floor as she goes. Her coat crinkles as she takes a seat. She drops her soggy umbrella on the floor at her feet.

The bartender steps forward, wiping his hands on a towel. “I’d imagine you do, he says.” He’s kind-looking, with big dark eyes and a receding hairline. A wide-open face. “What will you have?”

“Well,” she says, wiping her hair from her brow, “How about something warm. I’m freezing. You got Irish coffee?”

“We’ve got everything,” says the bartender.

The woman smiles. She turns and notices the man sitting there, studying his beer. Before she can say anything, though, one of the fellows at the front table interrupts.

“Welcome, young lady,” says Gene in the front. “Welcome to our fine establishment.”

“How would you like to hear about ol’ Gene’s feeding tube?” asks Don.

The two men lean forward in a silent pre-laugh convulsion of the sort where the hilarity renders you temporarily unable to make a sound. Gap-toothed mouths wide open, eyes bugging out. Finally they lean back and burst into a chorus of heaving, wheezing laughter. More thigh-slapping. These guys are the funniest people that they know.

“Now, Don, you know that’s not proper etiquette,” scolds the bartender. He pushes a steaming mug across the bar toward the woman, and smiles at her. “You don’t have to hear about the feeding tube if you don’t want to,” he says to her.

“Thanks, I’d rather not,” says the woman. She grips the mug with both hands and takes a long sip. Her shoulders come down a bit as she warms up.

“Proper etiquette is,” says the bartender, “You get to go first.”

“Yes,” says the bartender, “with your story.”

The woman stares at him for a long moment. Finally, she says, blankly, “Story.”

“Yes, your sad tale of how you came to be here,” says Don. Or maybe Gene.

“Oh… Oh!” says the woman throwing up her hands in sudden comprehension. “Oh, I get it! My story. Okay. Well if you don’t mind, can I have a minute? I’m still getting my wits about me, as you can imagine.”

“Take as long as you like,” says the bartender. “Some folks just breeze on through, some stick around. It’s up to you.”

The man at the bar continues spinning his beer, which has warmed considerably in his hands. Finally he stops and lifts it to his lips. He downs about half of it. He turns to the newcomer.

The woman sets down her mug. “Not as young as you, I don’t think,” she replies.

“No, no, not at all,” says the man, glancing again at the front door.

“You expecting someone?” she asks.

“Only for about the last sixty years,” says Gene.

The man glares at the two old-timers. Gene puts up his hands, palms out. “Sorry, sorry,” he says. “Next beer’s on me. I promise, she’ll show. Promise.”

“Thanks,” says the man at the bar. He looks down and mutters, “I doubt it’ll be while any of you are still here, though…”

The woman takes another sip, then sets down her mug and straightens her back. She peels off the raincoat and lays it across a neighboring barstool. “I believe I am now warmed up enough to tell my story,” she declares.

“Ah! Good. We’re all ears,” says Don. The old men’s chairs creak as they turn to listen. A gust of wind huffs against the outside of the windows.

“Well, it’s like this,” the woman begins. “I was on my way to work, like any other day, really, I guess. It was raining hard.”

“Yes,” well, I am making quite a mess, aren’t I?” says the woman, looking around on the floor.

She pauses, and looks around the room, as if realizing for the first time that anyone is listening. Speaking these things out loud makes them painfully real.

“So,” she says, haltingly now, “I guess, I didn’t look up, I was too preoccupied, and it was a lot of traffic, and I… the taxi was coming so fast, I never saw it until the last second, and…” she trails off. Her shoulders slump down. Tears drip from her eyes into her lap. “What is my family going to do? How could I have been so stupid?” She falls silent.

Everyone in the bar stays very quiet. After a moment, the bartender says, “Ma’am, it’s okay. Really. You take your time. You’re young. It’s hard, I know. But that’s what this place is for. Have a drink, talk it through. Think it through. You’ll be alright. I promise.”

The woman sniffs a little, keeps her face down, her dark wet hair falling in front of her eyes. A long silence, and then she says, “Well, that’s about it. That’s all I remember. Just me being stupid.” She waves her hand in a futile gesture and lets it drop on her knee.

She pushes her hair out of her eyes. “Thanks,” she says.

In a dark corner at the back of the bar, a chair creaks. A figure laboriously rises to its feet and shuffles forward toward the bar. The bartender stops what he is doing, looks up and waits patiently.

The man, stooped over with age, his plaid shirt and grey work pants hanging from his frame, looks up bravely at the bartender and says, “Sir, I believe I’m ready to go, now.”

“Very well, Bill, good for you,” says the bartender. He wipes his hands on a towel, and comes out from behind the bar. He escorts the man slowly to the front door and pulls it open for him, bells tinkling quietly.

The man pauses and looks up at the bartender. “Thanks, Pete, you’re a good man, you know that? A good one. Thanks.”

“You’re welcome, Bill, it’s been good to know you,” says the bartender simply. They exchange a smile, and the man steps out into the doorway. Before he leaves, though, he turns back to the man at the bar.

“Your wife will be here, sir, I promise you that. You’re a good man, waiting for her. Good, like ol’ Pete the bartender here. Don’t lose heart.”

“Thanks,” says the man, truly appreciating the encouragement. “I do believe you’re right.”

With that Bill waves his hand, turns and crosses the threshold, and the light outside becomes so bright that he disappears.

The bartender closes the door, and smiles after Bill. He returns to his post behind the bar, picks up a glass and begins wiping it.

“Don’t lose heart,” the man at the bar repeats, with a short laugh. He smiles and looks down, shaking his head. “Exactly. Don’t lose heart. If only.”

“Is that what happened?” says the woman. “Heart attack?”

The bartender smiles at him kindly. “That’s right, sir. An expert. And, a good man.”

The bells tinkle again, but the man doesn’t look up. A figure appears in the doorway, tiny, stooped, a woman.

The man’s head snaps up and he turns, eyes wide. Slowly, very slowly, he turns to face the newcomer.

Michael stands and crosses the floorboards the way he has planned to cross them for sixty long years.

“And you’re so young,” says the old woman, reaching up to touch his face. They stand there a long time, after such a long wait, as if no time has passed at all.

“Well, I waited,” says Michael, almost embarrassed like a young boy caught following his crush home from school. After a pause he adds, “How are you?”

“I’m okay, Michael, a lot has happened. It’s been a long time. You were gone so young… ”

“Welcome, Margaret, we’re sure glad you’re here,” says Don from the front table. “Very glad indeed.” Each of the men half-rises from his chair in a polite gesture toward this much-anticipated arrival.

“We are,” says Pete the bartender. “Please, have a seat, ma’am. Make yourself comfortable. You can stay as long as you like.”

“You’ve really been here all this time?” asks Margaret.

They cross to a table, since Michael can’t really expect his ninety-year-old wife to climb up onto a barstool. He pulls out her chair and helps her sit down. He takes the seat across from her.

Michael places his elbows on the table and leans forward. “Tell me everything,” he says softly, and smiles.