The Passing of Ordinary Objects by Robert Crisp

When he sleeps, his dreams dial her up

and she answers the first, floating ring.

Hello? she says from a faraway phone booth,

hiding from the stalking rain.

Her voice is a sparrow’s song in the static.

A lifetime of silence passes in a second.

Are you still there?

a closed-door life in a museum

that laments the passing of ordinary objects.

In his current incarnation, Robert Crisp teaches writing and literature at Armstrong State University in Savannah, GA. By night, he wanders through cemeteries, which isn’t always tolerated by the local constabulary. He writes poems as often as he can. 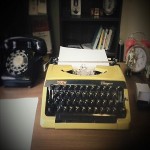