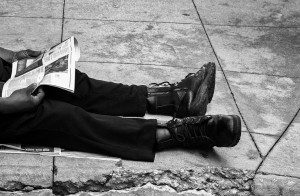 After they ordered, Jake spotted a discarded newspaper in the next booth and snagged it. He was the one who, had it been possible, would have arranged for a daily paper to be delivered to the door of his dented but beloved ’68 VW bus as they rolled across the nation. It was 1970, for Christ’s sake. Couldn’t somebody figure out how to do that? He probably would have sold his new boots to pay for the subscription.

“I’ll read the heavy stuff,” he said, “and soften it for you. You know, sometimes you’re like a baby who can’t handle hard food.”

“Well, fuck you, too,” Robby snapped. “All I ever said, once, was I don’t need to hear the body count every fucking day.”

“I’m just saying, some people major in history, others read novels. An observation, not a criticism.”

Jake was bringing up this crap again? Just because he didn’t relish the negative, did that make him a Pollyanna? It pissed him off, and it was the only thing between them that did. He tried again.

“Yes, the world is fucked up. I get it. Nixon and napalm and nuts with knives, yes, I know. But I choose to look at the other stuff, too. Is that so bad?”

“I’m sorry, man, I am. I’m afflicted with a touch of the old flippancy today, I know.” And before Robby could interrupt, he added: “And I know that it hurts others worse than it hurts me.”

He extended his arm, resting his hand on top of the napkin dispenser.

The breakfasts arrived, toast was buttered, syrup was poured, and Robby was happily chewing, when Jake changed the subject:

“Unrelated to any of this, I got to tell you something I heard yesterday in the drugstore in, where was it? Fort Madison, I think, right after we got in to Iowa from Missouri. You were still in that record store. I told the clerk I liked their little downtown, but it was too bad that so many of the storefronts were empty. And she said ‘this place has gone downhill since all the Negroes started to move here from Chicago and St. Louis.’ And she had all these nice religious posters on the wall behind her.”

“Lordy, yes. It made me want to take a shower. But I am gonna look at the paper now, if that’s all right.”

“Knock yourself out. Let me know if the war’s over.”

He returned to his serious stack of buckwheat pancakes and its truly decadent side of bacon. The bacon alone could have fed a small troop of Boy Scouts. They hadn’t had a breakfast like this in a long time.

“Can’s over that way, I think, just past the cigarettes.”

“Not funny, asshole, listen to this.” And Jake read aloud, carefully enunciating each syllable of what he now already knew:

Guitarist Jimi Hendrix has died after collapsing at a party in London. Police say there was no question of foul play. A number of sleeping pills were found at the house in Notting Hill Gate and they have been taken away for analysis.

Jake stood, folded the paper against the ketchup and steak sauce bottles, and walked toward the door. “I’ll be back, just some air.”

He watched him go out into the September sunshine. The autumn equinox, or solstice, whichever it was, was coming soon, but the days were still feeling more summer than not. The good weather abruptly felt wrong. This shouldn’t be happening at all, and if did, it shouldn’t be learned about on a shiny morning. Stupid. He picked up the paper:

Hendrix, 27, was born in Seattle, Washington, but rose to fame in Britain with his band the Jimi Hendrix Experience. He will be remembered as a key figure in the music world who transformed electric guitar-playing using distortion, feedback and sheer volume to create a revolutionary new sound.

He knew all that, but for the first time, he thought twenty-seven to be really young. He started to ask himself who he might be by that age but chased the question away. He pictured his Hendrix albums back home in L.A., the cassettes in the van, and his buddy outside: His buddy, the one who played softball really well and guitar even better.

He ate slowly, trying to savor each bite, and forgetting almost every time. The waitress re-filled his ice water and checked if everything was okay. She wore the classic restaurant-server outfit and looked a bit like an all-knowing mother on a sit-com, but they did not talk about what was in the paper. He could tell that she had been about to ask what happened to his friend, but had decided not to, and he admired the decision.

He read a little more but found nothing worth knowing. Unless he had overlooked it, there was no new draft policy, and without doubt, the war was thriving. Newspapers were mixed blessings, at best.

When he had eaten more than was wise — but what else was there to do — he asked for Jake’s to be boxed up. He paid and tipped, and walked outside. They had parked near a colorful tree that was still leafy, although there also were leaves on the pavement that made a crunchy sound as he walked through them. He found him under the tree, sitting against the trunk, strumming quietly on his guitar.

He put the box of lukewarm bacon, scrambled eggs and toast on the floor of the passenger seat and sat on a bench about ten yards from the tree. He listened for an hour to familiar tunes as well as re-imagined or invented ones. After an extended exploration of “While My Guitar Gently Weeps,” the music stopped. Jake looked up for the first time, a sad smile on his face, and pulled himself up from his spot. As they walked to the van they heard quiet clapping and turned to see a mom and dad and a couple of kids sitting at an outside table on the grass. The man flashed the peace sign and they reciprocated.

Jake put the guitar back into its case, placed it on the bed, tucked safely among the pillows and sleeping bags, and climbed up to the passenger seat. Robby drove, and Jake ate cold eggs with a plastic fork. 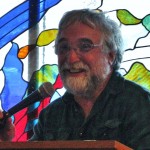