“Pain Scares Me Stupid,” She Said by Josette Akresh-Gonzales

A tumor the size of a football.

The fluid starts to build up in her belly

and she has to lie down on the crackling paper

to watch it pump out into dozens of glass bottles,

but at the end she is weightless, shaking out her wet wings.

Her daughter is there to hold her elbow,

and together they pick up the prescription at CVS,

place it in a nightstand drawer for now.

When it’s time, she swills down the self-killing fluid and thinks aloud,

“The room is swirling. This is so easy.

This should be so easy for everyone. Mama.”

Then the camera turns to the shadows

on the curtains and we understand that she is silent

because she is dead.

You are not only convinced, you are a convert.

After watching this documentary,

you seek out stories on NPR about palliative care

find one about how, in Uganda, women with breast cancer

scream in their huts alone, not knowing about morphine

unless they live in the city or near a clinic

and another one about training American doctors to

be more compassionate. What are they so scared about?

Addiction and abuse, they say.

with a crate of signatures, your hands bloody with paper cuts.

In the car on the way home from work

you daydream about a bad diagnosis,

decide to move to Oregon

now, before it’s too late, or

if that’s impossible, how you’d locate

some punk teenager to sell you heroin, just in case

You need some relief from the pain,

You see your sister and mother (two doctors)

fighting with you over Right to Die until

You shuffled signed petitions waving in their faces.

Until the day you died you’d wonder

how crazy stubborn the other could get

over such a clear moral choice.

Josette Akresh-Gonzales lives in the Boston area with her husband and two boys and is a production editor at NEJM Group. Her work has been published in PANK, Black Heart Magazine and the Best of Black Heart (2014), Matter Monthly, Two Hawks Quarterly, The Charles River Journal, Clarion, and Epicenter. While she was a student at Boston University (1997–2001), she co-founded the BU Literary Society and the journal Clarion and was its editor for two years. You can find her on Twitter @Vivakresh. 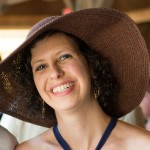