Our Conversation by Julieanna Blackwell 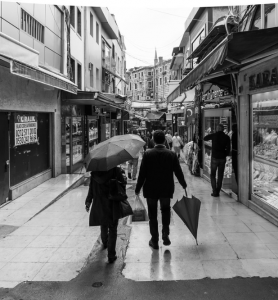 That’s how she starts our conversation. Two forty-something-year-old women seated in the back of a Starbucks, each with a Venti cup of coffee, black.

“Do you think it’s because he’s an alcoholic?” she asks her question. Anyhow. Without my approval.

I push my chair from the table to cross my legs. This is a rare meeting, out for coffee, away from our houses and the phone where we hold most of our one-on-one conversations regarding weekend plans, school outings, or her confirming what I plan to pass at the next block party. She’s the type of neighbor, that kind of woman, who likes to have everything decided beforehand. I’ll never understand the travesty of having two potato dishes at the same cookout. Meeting here was her suggestion and invitation for coffee, something different from routine. Her treat. Though nice and all, I’m sure this is her usual fussiness over yet another Bar-B-Q, including who’s coming, who’ll man the grill and what time. All of which could be settled by a handful of texts.

“The husband.” She slouches along with her answer as if chilled to the bone. Our neighborhood Starbucks is always chilly inside, but the rain prevents us from venturing to the patio. It’s too bad. I find the seating area cramped and the surfaces sticky. At least my chair is level.

“Well,” an appropriate word to start my half of the conversation. “Sure,” I answer.

She stiffens, pulling her sweater tight. She’s large chested. I’ve always been flat, even after children.

“You think?” She frowns.

“I’m not sure who we’re talking about. All the husbands are drinkers. Including yours and mine, and for that matter so are the rest of us. We all drink.”

This is a stunning statement coming from me. I’m known among our circle as a scatterbrain, an eccentric, and not one to gossip. Such are the nice chit-chatty things I’ve heard said behind my back. I’ve never really fit in. I keep to the fringe where things are kept general, safe. This particular conversation, one she started in a Starbucks on a rainy afternoon, could happen behind the backs of so many of our—friends. A chat filled with gossip preceded with an apology then topped with coupon tips or recipes for progressive dinners. Yet, she asks a dangerous question that implies there is a problem. There is a problem with someone. She blames alcoholism. What problem? I must have missed something. Probably. But why ask me? By convention, it’s her turn to speak. I wait.

“I guess you have turned cynical,” she says, twisting her cup around in its sleeve.

Now I’m labeled a cynic; that’s funny. I wonder who said such a thing and why repeat it back to me. It sounds like something my husband would say, one of his slanted jokes, private between us when he lists my faults as endearments. I grin, then suggest, “Perhaps it takes a cynic to point out that we gals might be alcoholics too, and not by choice but because some are inclined to join the happy-hour. So, who’s to say who has a problem?”

She remains still. I sit back, draping my arm across the back of my chair and comfortably resting my hand around the bottom of my cup, showing I’m open to the direction of the conversation, cynical gossip or not. The cup is deceiving. The coffee’s heat seeps through the paper and burns my fingertips. It’s still too hot to enjoy a simple sip.

“Why include the wives?” she asks.

I wave my hand with a half shrug. Our circle of friends is comprised of couples, strictly. Though our homes are still considered new construction decorated in all-matte Zen furnishings, our subdivisions are fashioned mid-century suburban, mindset and all. “The dutiful spouse thing,” I answer.

“And behind every great man there is a great woman, yeah?” she asks and adds, “they point right back saying what a great girl you are for playing along, too. No matter how pissed off they make you. They leave you angry. Knowing you can’t and won’t say a thing. But then, that’s what he thinks.”

The music changes. Perhaps the track got stuck on pause then restarted a tinny fusion of jazz and country folk, odd for Starbucks. The conversation shifts as well. She continues, “You know, it happens more than just at the neighborhood parties.”

She’s fishing. I’m clueless. Perhaps she needs someone to admit, openly for her, that her husband might have a drinking problem. But that’s the drinker’s role? Besides, how would I even know? Though I do believe he has a problem. Maybe, yes maybe, our conversation is meant to be helpful. Perhaps she finds me helpful. I’m not a gossip. And the reason she picked me and my opinion. She smirks, lifts a brow, and flicks a crumb off the table.

Hoping to ease things, I’ll offer up a known tidbit about my own husband. “There’s a difference between husbands and drinkers. For instance, I married the worst type of drinker.”

“And what kind of husband is that?”

“He’s a binge drinker. Social. I sometimes wonder what’s more important: the social aspects of a neighborhood bar or his gin and tonic. Some nights, when the kids and I are waiting at home, it seems we’re low on his list of priorities. Not when he works late though, which he does a lot lately. That I don’t mind.”

I cover the hole of my coffee lid with my finger, hold it there, trapping the steam, then pop it open sending a wisp of vapor over the table like a distant smoke signal. The truth is sharp and I believe it cuts us free from the restrained banter that exists between wives. Our friendships are nothing more than planning joint parties then cleaning up afterward—all by silent proxy because our husbands are also mutual friends. Their friendships reduce wives’ conversations to the trivial surface things the neighbors are meant to see. Oh sure, we can bitch about poor schools or even our finances, but never troublesome husbands. Because nothing is ever in confidence. Safe. What leaves home eventually comes back to roost in the worst way. Now I’ve offered a degree of freedom within our conversation. However, I’m unsure if I should’ve added that bit about him coming home so late, so often. So, I joke, “of course my honey-do-list always comes dead last on his list.”

Although I chuckle, she remains silent. I watch her remove the lid from her cup, dip her finger into the burning coffee, and then suck it off her nail. Everything about her is tired. The bluntness of her haircut, her jeans, her black flats, the bags under her eyes, and the over-used backpack filling in as a purse. Finally, she waves her pinky between us and says, “I doubt we’re alcoholics.”

“Of course not. Come on, I dilute my wine with ice to control the buzz so I can drive home rather than have him wrap the van around a tree. You experiment with frozen daiquiris or tiny martinis.”

“I never liked hard liquor,” she comments as her attention drifts to a pair of high school girls heading to the creamer counter.

“You’re lucky your husband only drinks beer.” There, I slipped the subject of her husband’s drinking into our conversation.

“Beer is harmless, cheap,” she says.

I find it hard to ignore the girl’s giggling. I watch them exemplify a premature ineptitude by splashing half-and-half to a latté. They must get it from their mothers. It’s like when they add a can of chopped chilies to a fresh salsa to add extra zip.

Instead of playing with the steam, I blow into the hole of my coffee lid, hoping to turn down the heat before attempting the thinnest of sips. I like the scent of coffee reaching back to me.

“He’s having an affair, you know,” she says.

The rain continues, as well as the busy baristas, the silly girls playing with sugar, and a river of questions of how and where and how; her husband, her marriage, an adulterous alcoholic. I can neither imagine nor comprehend an affair. Still, why tell me? It’s possible I’m the last to know. It doesn’t matter. Empathy floods my shock of a foreign situation. I feel sorry for her. I don’t know what to say, so I ask the only thing I could think to ask, “what are you going to do?”

“Well, now that you know about us, I guess I’ll have to end it.”

I freeze. My brain freezes. Thoughts halt to take an instant inventory. I grow acutely aware of every muscle in my body; how one knee digs into the back my shin, the swipe of hair stuck against a sticky spot on my arm. I feel my lips purse, how my eyes expand, drying, and the inside of my cheeks pucker against a ridge of teeth. Now I understand why. Why this conversation. Why Starbucks. Why me. And, whose husband she is asking about.

The girl’s games with condiments turns ugly as coffee and wood sticks crash to the floor. She and I ignore shrieking apologies and the barista invading the back of the café with paper towels. She waits, watching me. By convention, it’s my turn.

Though raw sugar granules crunch beneath my foot, my mind shifts to accounting. I count the times my husband came home late. I compare the number of his unexpected business trips against her recent rash of weekend visits away. I compute the time it took for my husband and a mutual friend’s wife to come back to the party from getting ice cream for the kids. Finally, I add his comparing my figure to a certain woman’s figure. And that chesty figure sitting across from me also knows the taste of gin on his lips and yet hates something I love.

I grew up with contempt. It comes with spite. There seated across from me pure spite drinks a scorching cup of coffee. She drinks it down in full gulps. My empathy evaporates to a hopeful wish that the coffee burns her esophagus to her rib cage, marking her truly hollow. She places her empty cup down.

The mechanisms inside my cheeks contract my lips into a grin. My legs uncross. I gather my things, my coffee. I dig my heel to the sugary floor to push my chair back.

“What are you planning to do?” she asks me.

Our conversation is now mine. I own it. To answer a question asked by the type of woman, like this one, seeking an easy excuse like a husband’s binging alcoholism first before owning up to her own guilt, without offering an apology no matter the destruction, but still needing to have everything decided beforehand—like potato salad—I stand. I spit. Like a piece of parsley stuck to my tongue. The perfect punctuation mark. I rub my lips dry with the back of my hand. I turn on her.

On my way to the door, I hand my coffee to the silliest of the girls, no doubt the ringleader and culprit to the mess and say, “Here, have my cup sweetie, it’s tempered enough, I never drank from it. It’s on her. Her treat. And don’t forget, you must always pay it forward.”

Julieanna Blackwell’s stories and essays have appeared in several publications including Slippery Elm Literary Journal, River and South Review, Scribble Lunch Ticket, and MoonPark Review. She is the flash fiction editor for 805 Literary and Arts Journal. A native Chicagoan, she lives in Florida. Please visit her at www.JulieannaBlackwell.com. 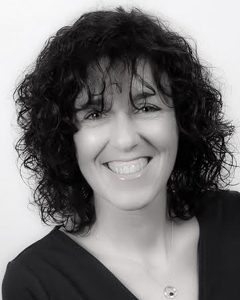