“On the way to the bookstore, missteps” by Sarahana Shrestha

On the way to the bookstore, I walk behind a man whose white denim jacket has tour dates embroidered on the back. Small, loopy letters in gold, orange, and black, long tails of thread dangling as he walks. I find myself wanting him inside me for hours while I go about doing other things, like browse the new fiction table, shop for groceries, withdraw money from the ATM.

At the bookstore, an unusual line wraps around the block. In front of me is a woman in an indigo denim jacket that’s cut like a boxy blazer, grazing her thighs a few inches below where her shorts end, and I realize I probably just want to have sex with denim jackets. I ask her what’s going on inside, I’m sure she’ll name a celebrity shopper, I’m ready to guess which one, but she just says there are cops checking bags at the door. I see teenagers, dressed like they could be environmental activists, trickling out, gesturing to others to do the same.

They must be here for pot, the cops, because according to the radio this morning, they’re set to decriminalize marijuana this afternoon, and between now and then would make the perfect window to rack up arrests.

I’m a hundred percent sure I don’t have any drugs on me, but I decide to leave anyway, because who knows what they’re really after—the list of books we want to buy, the things we text each other, the receipts we let pile up at the bottom of our bags, the slogans we wear on our t-shirts; our IDs, which they can claim are fake, and rip in front of our faces, then put us down for deportation, make us sign papers saying we agree.

Someone calls my name as I’m picking up my pace. It’s the man in the white denim jacket, smiling and waving. We went to the same school, he says, he was three grades junior to me, he says. I pretend to recognize him and we step inside a café where I’m glad to sit across from him, not facing the back of his jacket that still has a strange hold on me. He recounts several stories from our shared past, all of which I remember, except my versions seem to have no trace of him. He asks me if I go back home often, I say I’ve gone back three times just in the last two months because my husband and I are closing on a house in a village called Ligmodche, right in the lap of the mountains.

His silence is loaded with disapproval. Going by his face, which looks the right ethnicity, I’d guess he disapproves because he’s from that village. I quickly add it’s a worn-down house that nobody wants, which is a lie. It’s a gorgeous house that used to be a monastery. Still, he doesn’t say anything, and it becomes clear to me in that instant that if there’s ever a riot in that village, our house will be the first to go. All the things we’ll bubble-wrap and stuff into barrels to ship across the world will be heaps of ashes at our feet, and should we need an easy exit, there isn’t going to be one. A two-day hike around the mountains, through parts that are just a foot-wide, is not what you’d call easy. An unmanned, two-seater “shuttle flight” that costs thousands of dollars and shoots you over the mountains in five minutes, all of which will feel like the worst minutes of your life, is not what you’d call easy. We should’ve thought harder. About how half the stores had been shuttered, how rapidly the snow caps are melting—a deluge-in-waiting!—and how their men are said to be increasingly flocking to other countries for jobs. Why have we been chasing this dream, cooked up so long ago we don’t even remember the reason?

The table jerks against me and the man is on his feet, whispering, “Let’s get out of here.” He slips through the side door and exits but I’m too slow to follow. I see the front door open. A couple of cops, asking for the manager.

Sarahana Shrestha was born and raised in Kathmandu, Nepal. Her writing appears in La.Lit (Nepal), Work in Progress, Dollar Stories, and elsewhere. Her prized accomplishment is having once published an online magazine that was one of the few websites singled out for censorship by Nepal’s former king during a coup. She is the co-founder of theshortform.com, her photography can be found at sarahana.com, and she tweets furiously at @sarahana. She lives with coyotes, wild turkeys, and a woodworker near Kingston, New York. 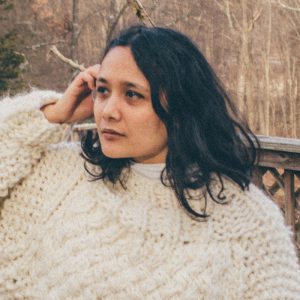