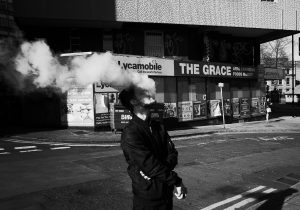 The first moment they spent alone was terrifying. From an outside perspective it might have seemed mundane. But even in memory, her heart rate would rise. They were fourteen, both of them. It was sleeting. Wet, melting ice was falling from the sky. She had an umbrella, he didn’t. Walking from school, he looped his arm through hers with a play on a dashing smile. Her stomach lurched. He didn’t ask. He was just suddenly there, next to her, holding her.

“I forgot my umbrella.”

“You never bring one.” She was immediately embarrassed that she admitted to noticing him. Her cheeks bloomed under the weight of what she said.

He was effortlessly, intensely cool. They had only been in high school a few months, but somehow he was already widely known, even to the upperclassmen.

She was not. She was constantly, consistently terrified.

He lit a cigarette with shaking hands. His hands were bright red from the cold, slick with sleet. She didn’t think it was the weather that was making them shake.

“Do you want a glove?” She asked, taking one off, and handing it to him.

“I only need one. To hold the umbrella with. Take it.”

She sees him now, in the newspapers. Blood on his shirt, his hands, his face, spattered. They say he’s guilty. His face, shocked, wailing, in a courtroom takes up the front cover of the Daily News. How many years? She wonders to herself. Ten, her heart thunders in response. It has been ten years, but her stomach still flutters thinking about him.

Moments passed. Blocks came into view and faded behind them. She was worried she was a bad conversationalist. That she was bad at socializing. That she was as awkward as all her friends said.

“Where you headed?” He asked.

She should lie, but she couldn’t. It would be obvious. “To Josh’s. To do a Physics report with him and Marina.” She wanted the words back. She wanted to grab them out of the air and stuff them back down the throat, painfully.

Josh’s apartment was small. It was a fifth floor walk-up with parents who were never there. It was a one bedroom, really. But his parents had made a wall of bookshelves, carving a small bedroom for him out of the living room.

She wasn’t sure where to sit, but plopped herself next to Marina, who seemed to know what she was doing.

“You been here before?” He asked her.

He winked, “It’s a cool place.” She felt her face redden again, and hated herself for it.

Josh rolled his eyes. “Come on, man. We’re here for a project. We actually have to do it.”

She pulled out her Physics binder. But she knew already it was useless. He was sticking a cigarette in his mouth.

Josh leaned over the couch to open the window. “Come on, man,” he said again, but this time it was more of a mutter.

She looked down to the work they had to do as smoke filled the room. Anxiety summersaulted through her veins. She wasn’t the kind of girl who didn’t turn things in, and she didn’t think she wanted to be. She began to mindlessly begin to work on the project, but out of the corner of her eye she saw no one else was working, that Marina was sputtering and laughing after taking a sip from a flask.

He put his hand on her knee. It was warm. She could feel the heat seeping through her denim. Her heart started beating faster. He was handing her the flask. He whispered in her ear, “It’s adorable how nervous I make you.” She saw Marina roll her eyes and Josh look away, and she hated herself, but she was so desperately happy that he found her adorable in any way.

She doesn’t buy the paper. But she finds herself typing his name into Google as soon as she can. It’s everywhere. Even the Times has something on him. She clicks on the Post’s piece. Caught Red Handed: Man Beats Girlfriend to Death.

Her head was spinning, her throat on fire. She wasn’t sure she liked the feeling, but she wasn’t sure she didn’t either. His arm was around her shoulders and he was telling a story that was making everybody laugh, cigarette balanced in the corner of his mouth.

Before she knew it she was following him outside, back into the sleet, for a beer run. She had never been on a beer run before, but he said he knew a deli that didn’t card. She had forgotten her umbrella inside. “Don’t worry about it,” he said. “I got you.” He pulled his faded army jacket off and carried it over their heads.

“Wait outside.” He told her, and she did. She waited under the awning of a nail salon across the street. The winter sun was already setting, and the neon of the salon lit up the wet sidewalk. She had his jacket draped across her shoulders. She found herself imagining that this was her life. That had always been and could always be his girl.

He came back, arms carrying heavy plastic bags. He put them down and reached towards her, and she thought he was going to lift the jacket off her shoulders, but instead he grabbed them, ever so gently, and kissed her. She couldn’t imagine it was happening, she had never been kissed. She felt panicked that that she was terrible at it—she could tell she was terrible at it—and also like she was the most remarkable version of herself that she had ever been.

She reads every article, and sees every image. Him in cuffs, him in the back of the cop car, him and his girlfriend smiling out at the camera just two months ago, him in a suit for court. She sees people’s names that she knew and remembered in print. Saying he was a good kid, saying he was always trouble. Saying it was the drugs, saying that he had always been violent and vengeful. She can’t think of anything that he had always been. She clicks onto an image, him in high school, and she can’t help to smile.

He pulled away. “Was that your first kiss?”

She knew she couldn’t lie, but it killed her to say, “Yeah.”

He smirked. “Well, that’s alright. I’m always gonna be something to you now.”

Ava Robinson is a writer with a history degree. She has been published in Soundings East and Little Patuxent Review. She works at the Tenement Museum in Manhattan’s Lower East Side, but is a lifelong Brooklynite.