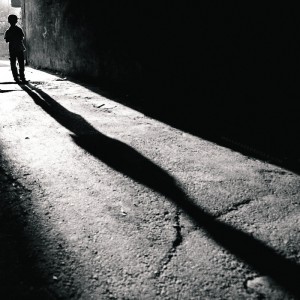 Your bike’s rear tire will orbit its axis in the ditch next to you when your dad makes his first lap around the collection of condominiums you call home. You are supposed to be in school, and will consider the irony of hiding in a ditch while you ditch. Your father’s face will be red, tie too tight, eyes scanning, but he will not see you. When he’s out of sight you’ll right your bike and look for a new spot.

Your mom will be at home slipping Percocet into her wine cooler and watching the TV. On the TV will be stories of shock and awe. Your brother will be in his first week of basic training, Fort Benning, getting his head put through a wall by an overzealous drill sergeant. There will be lots of people doing lots of things, but right then you’ll be riding your bike at the end of your middle school career, circumscribing the condo buildings in various stages of disrepair; the defiant dandelions that pop out of potholes, angling toward a sun that can’t be seen through the cloud cover. You’ll duck behind the enclosure meant for dogs when your father makes his second lap, lay supine on the concrete like you did when Drew first left for basic and Lula was out with you, at night, past lamppost-light-curfew, with the joint she rolled herself, stolen from her brother’s stash, the paper ill-licked and so spilling buds onto your chest as she passed it to you in the dark, hints of stars peeking past polluted sky, polluted by light among other things, and the smoke took laps around the little fenced-in enclosure before dissipating.

Your grandfather is a Peruvian shrunken head with a matching body. He is your mother’s father and he is in a bed whose comfort level is the sole concern of a nurse whose family escaped Cambodian genocide to bring her here. She was a quiet child, fairly invisible, taunted by the few who could see her, and now makes sure, in her own way, to bring a little light into the world by improving the comfort levels of beds that are kept for the dying. You will have a holographic Pokémon card in your pocket with a smudge on the P, making okémon, and you will imagine a Jamaican man telling you that everything will be okay, mon.

Your father’s third lap will see him staring ahead, no longer searching, maybe on his normal commute from the look on his face. Your face will be half of his face and the other half will belong to your mother. It’ll belong to her even when the ludes knock her out and she might be on the couch, like that one time, soap dialogue as soundtrack, robe open, sprawled, nothing on underneath and so you saw where you came from, left her like that and sat down on the other side of the couch, changed the channel because Gargoyles was on and that’s what you’d watch after kindergarten let out, and she came out of it around the episode’s denouement, made a PB&J with the robe still open and said you don’t get any.

You will track your father’s orbit against the sun’s trajectory over your complex. It will begin its journey over the creekside tree that Drew once slung a rope over, where he said don’t worry I’ll catch you, and he did, but the second time he didn’t, and the mud went up your nose, and when you laughed you snot-rocketed it onto his shirt, and he laughed but punched your arm and left a bruise anyway.

When Dad gets in Mom will be hiding the mouthwash. He will loosen his tie and he will look at you. He will tell you all about his day: who said what to whom at work, the politics at play, when a raise might come. You will reach into your pocket. You will grab your card. You will think to yourself: okémon, and that will be all right.

Nicholas Olson earned his BA at Columbia College Chicago. He lives in the city, where he can be found writing a novel and wrangling a cat. He has work published or forthcoming in Hobart, Thrice Fiction, Eunoia Review, Apocrypha and Abstractions, Oblong, Foliate Oak, Every Day Fiction, The Open End, and Flash Fiction Magazine. He can be stalked at nicksfics.com. 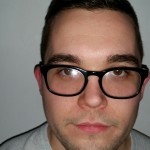