We Do Not Provide Soy Sauce by Kim Magowan 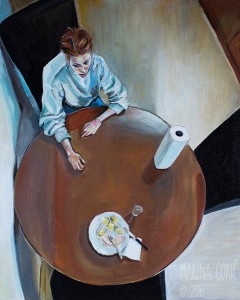 For the past seven months, since she found out about Monique the call girl and kicked him out, Renee has been waiting for Ted to say the right thing, the words that might allow her to forgive.

Renee did not hesitate when it came to expelling Ted, or paying a lawyer money put aside to rebuild their deck. Nonetheless, when it came to changing her relationship status on Facebook, she balked. Her finger hovered over “Edit” and “Profile,” unable to delete “Married to Edward Oberhausen.”

If she could divorce him ten times, she would. If Divorce were a mallet she could heft, she would bludgeon him until his body accordioned like a cartoon character. She can picture Ted’s diagonal, ladder-like pleats, bobbing over his flip flops.

Part of the problem is the medium. Facebook, the curated life: for vacation pics, wedges of ocean fizzing in the background. Were Renee to change her status to “Divorced,” she can imagine the replies it would generate—the sad faces, or worse, the Likes. Patrick, for one, would “Like.” The other day, Patrick asked Renee why she was still wearing her ring. Of course, most friends would ignore her status change—no one knows how to respond to bad news. When Renee’s father died, her mother received only four notes. “The art of writing condolence letters is dead,” Evelyn pronounced.

Though plenty of people use Facebook to parade tragedies. Just yesterday Renee’s co-worker Gretchen posted, “I had a nightmare about my abuser.”

To change her relationship status feels decisive in a way that hiring a lawyer did not, or even telling their daughter: brave Addie, who told Renee over an ice cream that actually, she felt relieved. This both impressed and hurt Renee. Her own parents’ divorce had eviscerated her. Yet here was Addie, her front teeth scalloped like a linen shade, calmly nibbling her waffle cone.

The people who matter already know. Addie’s teachers know. The fifth grade art teacher is a Facebook friend, and must wonder why Renee is still Married to Edward Oberhausen. No doubt other friends wonder the same, though only Patrick is gauche enough to link her Relationship Status to the still-worn wedding ring, to Renee’s reluctance to have Patrick spend the night, or to introduce him to Addie.

“Are we dating or not? Are you married or not?”

Well, technically, yes, she is still married. Patrick did not quite roll his eyes at this, though he did say, “Technically: that’s a word that often gets misused.”

She has only known Patrick for a year, and been dating him for less than two months, but he is familiar, the kind of erudite guy Renee always favored: guys who watch German films and eat sashimi. Ted was the great exception: former frat boy, athletic and introverted. They met at a Halloween party thirteen years ago. Renee, as Medusa, had green pipe cleaners tied to her hair. From across the room Ted approached her, snapping his fingers; they danced for five minutes before exchanging a word. Now that seems a harbinger for all their communication problems, but at the time Renee found it sexy as hell. From the casual way Ted put his hand on her hip as they danced, she could tell he would be great in bed. She was spellbound, reluctant to speak even when the loud song they were dancing to finally stopped.

Now, Renee expects Ted, never a talker, to say magic words. Renee isn’t sure what those words could be, though sometimes, as she walks through the city, nearly knocking over fellow pedestrians with her furious, brisk stride, she imagines phrases. These dissolve under inspection. “You are the most intelligent woman I know.” “I don’t deserve you.” One is boring and the other banal—surely this cannot be all it would take for Renee to halt the divorce proceedings, to eliminate Patrick (clever, but clammy, and all thumbs in bed)? Surely it would require a more perfect incantation?

Ted won’t put even clichés to the test. “I’m sorry” is all he can manage.

Renee’s mother was tyrannical about apologies. They had to be precise. “What exactly are you sorry for?” Evelyn would demand, and grimly fold her arms, while Renee tried to guess (“For being rude” occasionally worked, but was more frequently rejected as “Too vague”). Sometimes with Addie, Renee catches herself ventriloquizing her mother. Has she done this with Ted as well? Been frosty and skewering, an icicle?

Nine months ago, before she came across the credit card receipts and found out about the call girl, Renee and Ted had dinner at a tiny sushi place that Renee liked, but Ted objected to because they refused to provide soy sauce. They were proud of this refusal: “We do not provide soy sauce” was actually written on their menu.

Ted had said, “This place reminds me of you. They know what’s best.” He said nothing more, frightened off, perhaps, by the way Renee looked stricken instead of amused. She knew what he meant, though: taste enforcer, culture cop. The wife who bought her husband clothes.

Two months later, when she found out about Monique, Renee had pictured her as a California roll: all coral mayonnaise, dripping soy sauce.

Kim Magowan lives in San Francisco and teaches in the Department of Literatures and Languages at Mills College. Her short story collection UNDOING won the 2017 Moon City Press Fiction Award and is forthcoming in 2018. Her novel THE LIGHT SOURCE is forthcoming from 7.13 Books. Her fiction has been published in Atticus Review, Bird’s Thumb, Cleaver, The Gettysburg Review, Hobart, New World Writing, Sixfold, Word Riot, and many other journals. 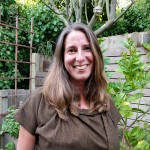